Singing is good for you... 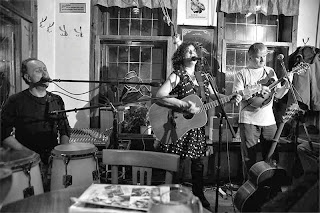 Group singing sessions start up again next week (2nd October) on Wednesday nights in An Cuan in Rostrevor at 7.30pm.   This will be a 4 part evening - class of exercises, group singing session, tea and chat break and finishing up with a singsong/singaround.   If you're in the area and would like to join us please come along -- all the details are here. 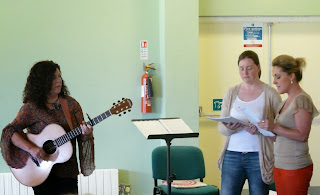 I teach a natural way of singing - - no training the voice for operatic work - but grounding the voice in telling the story.  I work to help people use the muscle of their voice and get used to the idea that their voice is unique and even though it doesn't sound like the person you feel it should sound like in order to think of yourself as a good singer, the fact that you are singing will make your voice strong.  A lot of these ways are similar to those ideas promoted by the NVPN - Natural Voice Practitioners Network.


So here are some ideas of why it's good for you... courtesy of my good friend Laura Plummer who runs the Voices of Lecale community choir in Downpatrick ... 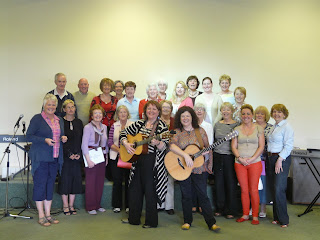 Getting back to blogging ...

I've been away for a few weeks enjoying the sunshine ... as a result I missed the last week or so of the month long Blogalong challenge and would really like to pick up where I left off.

I still haven't started to advertise my blog outside of this group for the main reason that I'm uncertain about how far I want to share my life with the people who check into my Facebook page or website.

I'd be really interested to hear some of your views on this ... how much do you share of your life on your blog?   Do any of you mix business and personal on your blogs?  How does that work for you?

Looking forward to hearing from you.

Email ThisBlogThis!Share to TwitterShare to FacebookShare to Pinterest
Labels: blogalong


Here are some images from our busman's holiday trip around France and Spain.   We haven't taken a holiday for 15 years so this was a rare treat and even the couple of gigs we did were different from our usual events and felt like a break from the normal.

We spent time with friends and family in 3 different areas  - and it was just wonderful - and neither of us wanted to come back and are plotting our return!

We arrived back to the rain but thankfully the Indian summer we were promised has shown up .... but in the coming weeks I'll need constant reminders of the sun :)

We took the ferry over from Ireland to France and started in the middle of the country staying with friends we haven't seen in over 10 years.    To protect the innocent I'm leaving them out of this picture blog ... but the area was beautiful ... sunflowers and castles, red roofs and red wine.


A few days later we headed down into Spain - beautiful scenery - and it was in the 30s centigrade all the time we were there - total bliss.

Happy Memories.
How was your summer?
Did you get a holiday?

The start of winter routine

September is well into its stride now
The holidays are quickly becoming a distant memory ...
Although this picture will bring me back again... 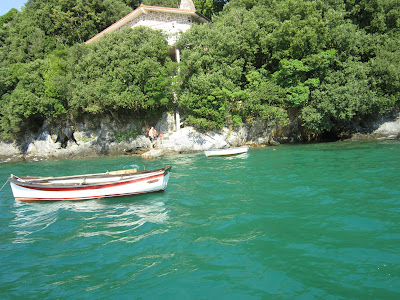 Tomorrow I start back with my school classes
not looking forward to it
It's only one morning a week
but it's a part of life that takes me away from my own creative process
I get so absorbed in everyone else's improvement....
But y'know what? It'll be fine once I get started.
Don't know how many students are coming along yet
Hopefully some of last year's will return
A great bunch of singers
And we'll find new material to sing.
It's interesting being around teenage girls
Reminds me so much of myself
and hopefully I can spare them some of the horrors of my own teenage years.

But gradually all my schedule has filled up for the winter

Choir starts in another couple of weeks and a new guitar class starts before that.
and all my lovely adult singers will be well into their process by then as well.

So, daily, in my morning pages, I'm reminding myself of who I am - what I am - a singer, a performer, a writer, a musician, an entertainer... and after all of that I also coach and teach.   In previous years I've allowed me to get lost in everyone else's drama - the year before last I didn't even learn one song during the 9 months of term.    I was wondering why I was getting so stressed out and fretful about starting back into September.    But this year, it is not going to happen.   If I have to write a reminder to myself every day for the next year, then that's what I'm going to do.

So, here's what's going on in my creative life ....
I started back in the recording studio last week - making a start on the new CD.    This will be my first time playing guitar on my own recordings and I'm really pleased with the results so far.  Although I've recorded 7 CDs to date, I only ever played guitar in the background on one or two songs - I always got someone else (better) to interpret my ideas and then tried to get my own ideas back out of what their interpretation was!!!    Strange one .... There'll be some songs still to write, but to start with we're putting down all the songs that are ready to go.

I've also got backing vocals to do for another recording project next weekend and all of those songs to learn...

between now and then - a revisit to some music I put to a Hungarian poet's work during the Summer - we've been invited on to a local TV show on Friday to promote her work - and mine.    (That was so interesting - putting music to someone else's words).

And I've started on the songbook that's been in the pipeline for a long time now.  I'm trying to do one thing every day to move it along until it gets its own momentum -  initial copyright queries haven't gotten very far today but tomorrow's another day.

If that's not enough ... I actually drew a face in my new art journal this week!!!  It's not completed yet, but the start was a big leap for me....  Art has been such a distraction all summer - in fact for longer than that - perhaps a couple of years now - but it's finally producing the results that I've wanted .... by being creative in another area it would spark my own creativity again - and it worked!

How is the Autumn settling in for you?   How do you keep your focus when you have to deal with other people's creative output?
Posted by Fil at 22:31:00 1 comment: