I'm taking a few of this month's photos from a walk at Easter along the Mall in Ballyshannon in Co. Donegal, where the River Erne runs down into the Atlantic.
And joining in with Kate for the monthly round up of photos to match words.

The water had just been released from the dam at Kathleen's Falls about 1/2 mile back, causing the swirling foam.   The island is called Inis Saimer (Saimer Island).  The story goes that when the Vikings invaded the chief (or perhaps it was his lady) had a beautiful dog that died and was bored on this little island.   The dog's name was Saimer.

Low tide at Bundoran.   I love the shape and patterns of rocks at low tide - this part of the shore is quite long and flat. 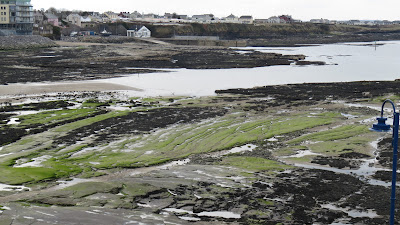 Back at the Mall in Ballyshannon- there's a little walk way.  These trees are part of a Fairy wood, which must have been decorated by children.   I'm going to go back in a while when the trees are in leaf to see what it's like.
Ballyshannon is the birthplace of the 19th century poet William Allingham who wrote "The Fairies" - a poem that was used to get us to bed at night.  "Up the fairy mountain, down the fairy glen, You daren't go a walking For fear of fairy men.."  There's something in it about the fairies stealing little Brigid and that was the part that kept us indoors at night. 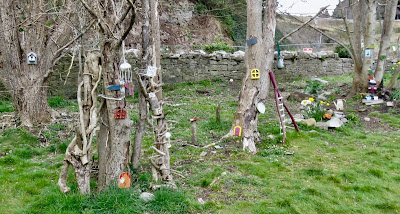 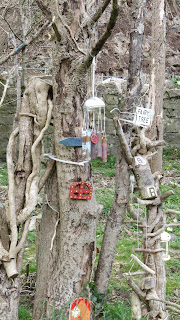 Just at the end of the fairy trees there's this Little Free Library - you can barely read the letters on it - but I thought, what a charming idea. 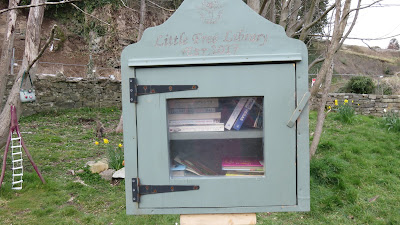 Along the Fairy Glen (sorry, more fairies), back at home,  we walked right past this boy.   I think the picture is a bit overexposed, but he was balancing on a stone watching out for his supper.   Usually you can't get this close to these birds - they look prehistoric, don't they? 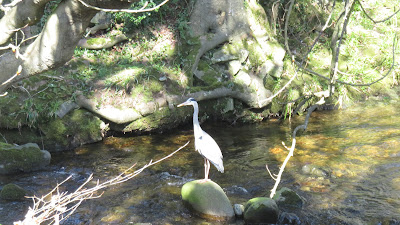 Finally Spring is starting to show.   In the distance these new leaves looked like flowers.  I just love that zingy colour of new life. 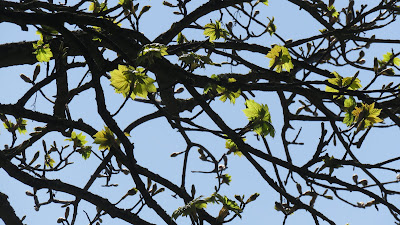 Thank you Kate for doing this love scavenger hunt each month - I'm off now to check out everyone else's photos over the next few days.
Posted by Fil at 17:23:00 26 comments: 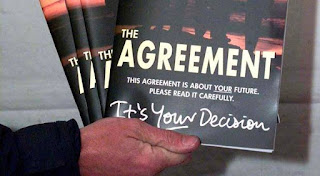 It's 20 years since the Good Friday Agreement was signed in Belfast in effect ending more than 30 years of sectarian warfare.

In joining in with the monthly We Are The World Blogfest to highlight good news stories around the world I thought it was worth celebrating the fact that this accord has lasted for 20 years.  At times it feels like nothing changes, no progress is being made, but then I realise that just keeping going is in itself a huge achievement, one that has allowed us ordinary people to sleep better at night.

Local semi retired political journalist William (Billy) Graham was there at both the signing of the agreement and at the 20 year celebration which brought back the various world leaders who contributed to helping the Agreement happen.

These are  his reflections in the Belfast Telegraph.


William Graham: Like our peace,
it's still imperfect, but we must
hold on to Agreement
More than 40 years since he witnessed carnage on the streets of Belfast,
William Graham believes there is hope for the future. 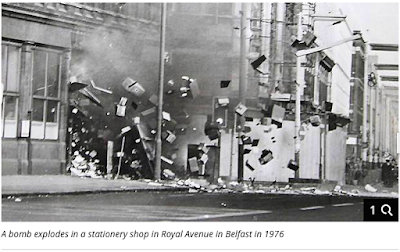 This is the 13th month of We Are the World Blogfest and the co-hosts this month are
Shilpa Garg, Dan Antion, Simon Falk, Michelle Wallace , Mary Giese
Posted by Fil at 00:55:00 5 comments:

Have guitar. Will travel.

And we’re off.  Out over the Irish Sea. 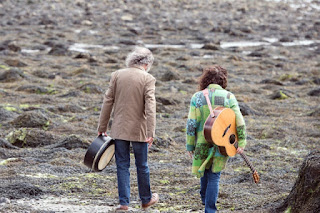 So excited to be heading out on the road again.
Playing at a couple of new-to-us folk clubs near London first.

Then driving north over the weekend- stopping for a night in Northumberland -(and I’m hoping to fit in a visit to Barter Books en route - thanks Kezzie for that tip).

Then two more clubs in Scotland

Stirling on Monday 30th
Glasgow on Tuesday 1st May. (Gosh May already)
(Details)

We’re looking forward to hearing some great floor spots - the songs are always very different from region to region and it's one of things we both enjoy most about playing folk clubs.  (If you're not familiar with folk clubs, a lot of clubs devote  the first part of the evening to members who perform a couple of songs each - there can be as many as 3 performers before each set, and as few as one support act - that's known as a floor spot.  In fact I think Barnet Folk Club has half the night as a singaround/session and the second half will be us)

If you know someone living near any of these clubs who may be interested please pass on the info. 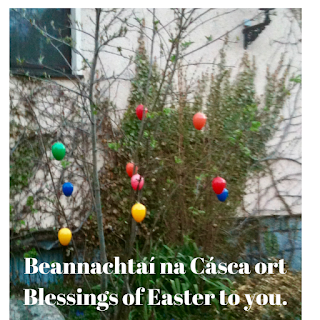