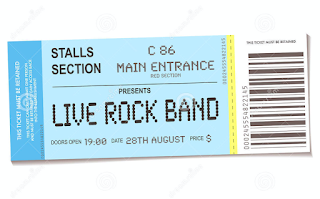 If you see a show you fancy advertised at the local theatre or cinema, do you book in advance?   Or do you just leave it til the last minute in case something changes?   Perhaps you like to just turn up at the door?

Recently I've noticed a change in people's booking habits - perhaps it's all the uncertainty over Brexit here that is making people less sure of where they'll be or what they'll do (for example, the housing market has taken a big hit and that's what's being blamed) ....

But several theatres and small venues I've spoken to or been in contact with have been getting in to a real panic if there are no pre-sales 2 weeks before an event, and they are then cancelling the upcoming show.   One theatre booker told me she cancelled 5 shows in the Autumn alone because of that.

Normally in music, in small venues at least, venues wouldn't start to panic until a few days before the event and push up their advertising for a last minute sale and then keep fingers crossed right up to the last day.  But obviously theatres are a different animal.

I would always be a very last minute buyer - probably to see how I"m feeling on the night - and maybe it's because we plan so much of our lives way way into the future that I leave our leisure events until the last minute.    But I'm going to try to make more of an effort from here on in.

If you do like to go to see shows, try and book a wee bit earlier to give them some confidence.

Morning pages have long been part of my routine - it's a habit I picked up from Julia Cameron when I first did her book The Artist's Way 20 years (or more) ago.  Write 3 pages (or 750 words or for 20 minutes) long hand every morning as a way of getting subconscious ideas down on paper and ridding your mind of the unconscious critic that resides there for all of us.   I love this practice - it's a meditation sometimes, other times a rant, often just a planning exercise or even a way of recording and processing life and slowing it down a wee bit.

Recently I've been dipping in to the book again, re-reading it and doing some of the exercises.  One of the other regular practices she advocates is the Artist's Date - a solitary playdate with your artist each week as an idea gathering, well-filling exercise and it's something I had real problems with when first doing the Artist's Way, not the outings so much as the alone time - difficult when you live with your work colleague!.

Anyway Tom had a large recording session in the house over last weekend and as we have such a tiny house the musicians ended up being spread through most of the rooms for sound separation.   So I took myself off for the day and ended up at an art gallery nearby followed by a nosey through the charity shops in the town.

I've passed signs for the F.E.McWilliams Gallery on the road from Newry to Belfast many times - it's been there for years, so I thought it about time to go and have a look.

Frederick McWilliams was one of the most influential sculptors of the 20th century, a contemporary and friend of Henry Moore and a follower of the style of Rodin.  His work is amazing and this gallery is a permanent space dedicated to his work and curated by the local art council - it also houses temporary exhibitions - the one just finishing today was Crossing Lines.


Here's a little video of a look around the garden and an interview with him when he returned to Banbridge in his later life.

There was a lot to look at in this exhibition which is being run simultaneously in galleries both north and south of the border.  The garden, cafe and craft shop are all fabulous and I will definitely go back for another look.

In the Crossing Lines exhibition one guy did on site paintings both north and south which really looked like scribbles to me, but I really liked his description of border, in these turbulent days - Liminal Space he called it. 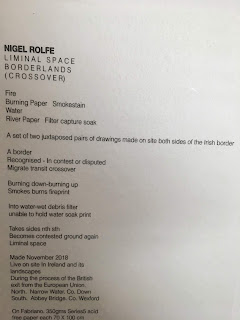 There's a speakers corner in the space which includes lots of posters and drawings both from adults and children - in fact they regularly run toddlers art sessions. 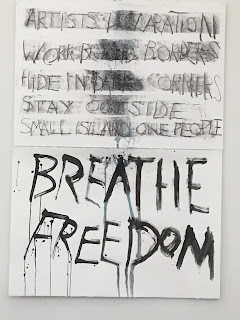 Out in the garden there are some beautiful huge pieces - how on earth do you sculpt in bronze?   Fabulous. 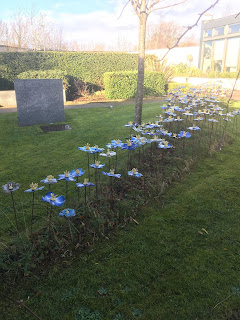 Regretably I didn't take more photos but there's a lot more on their Facebook page which is their only online presence sad to say. 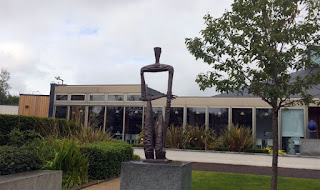 As Artist's Dates go I found it a very enjoyable and thought provoking afternoon (and the coffee was good)
Posted by Fil at 10:00:00 5 comments: 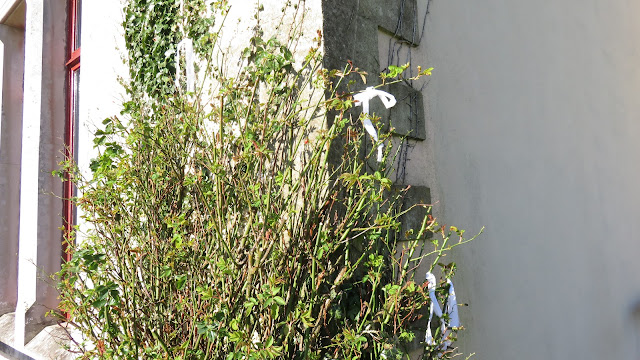 In keeping with the traditions of Brigid's Eve, after dinner last night a crowd of us went out to hang pieces of cloth on a bush to be blessed by the fairies - an old tradition called Bratog Bhride (Brigid's Cloak).   Then in the morning you take your piece back and keep it in the house to bring you good luck, or some people believe it is a cure for headaches because it has been blessed by Brigid, the goddess of fertility and creativity. (In these parts, in Co. Monaghan, you're supposed to hang the cloth on a fairy tree, and there is a fairy fort here, but the snow, and an extra couple of glasses of wine meant we only got as far as the bush outside the door!) 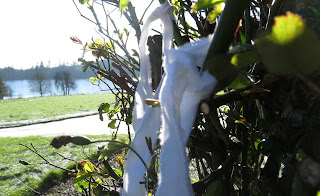 We're back at Tyrone Guthrie House in Annaghmakerrig, an artist's retreat - I wrote about it here on a previous visit.   And I'll come back to it at the end of this stay.  We're both still trying to recover from that awful bug so we're not being as productive as we'd like, but nonetheless the ideas are starting to come.

For me a highlight of being here is the evening meal which everyone shares.   Around the table last night there was a ghost writer, a novelist, a poet, a theatre director and a drama writer working together on a new production, a composer of film music, a gallery owner/manager, another theatre director, a writer preparing performance pieces, a young actress working on pieces of video crossed with live performance, a traditional musician, a woman writing about cows and ourselves two, there to work on songs.   After dinner we had a round table concert of songs, poems, drama monologues, and stories, from the hilarious to the serious - the mixture of creatives of different disciplines is so nourishing.

If you'd like to read more about Brigid I wrote about her here and at the link for Bratog Bride above.