I have been really bad at blogging this past while - too many distractions I think - with the constant news and rumours and maybes and uncertainties it's hard to focus on anything.

So it's with delight I started hunting for photos for this month's scavenger hunt - a photo inspired by a word - organised by Kate at I Live, I Love, I Craft, I am Me  I love checking in on everyone else's photos and having a wee photo trip around the world.

The weather has been beautiful over the past week or so, albeit still very cold, and after an appointment I went for a stroll along the sea front in Newcastle - Co. Down.   This is my favourite place for an afternoon out - lovely coffee shops, nice boutiques, great public art and sculptures and the endless expanse of the Irish Sea which was very FLAT calm. 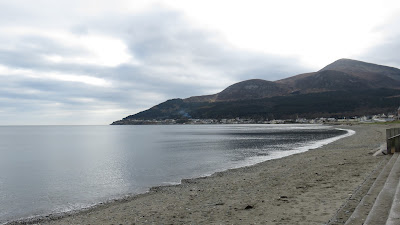 It took a while to find something for this -  I spotted an abandoned tyre on the beach in Newcastle - not very picture squeue but ... and then I thought of the bodhran (pronounced bow ron), the Irish drum that Tom plays.   Originally made from an old metal sieve which was covered with a goat skin, now the circle is wood, but the skin is still goat. 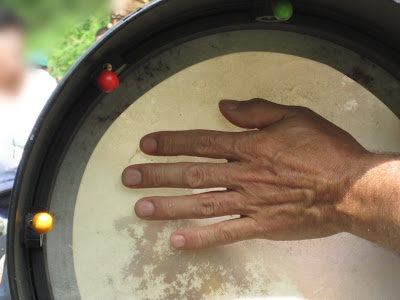 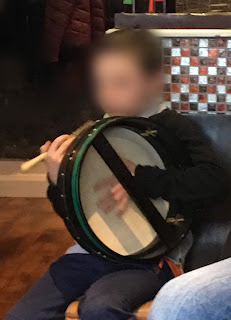 I've shown this photo before here on the blog but it fascinated me and I went out most days to check on progress while we were in Denmark.    The swing of the man and woman to indicate whichever way the wind was blowing was like watching the birds ... and they'd work harder swinging the axe and saw the stronger the wind blew. 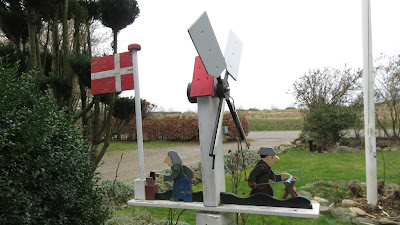 This mountain is part of a pair - the Cock and Hen - I think this one's the Cock because of the comb on his head .... I loved the ragged tops of the mountains and the way the walls pull everything into a sense of order 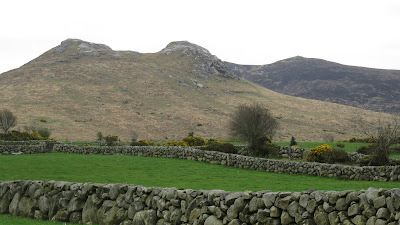 Some crocuses in one of my pots a while back ... I've been collecting these ceramic mushrooms which make a lovely tinkling noise in the rain and wind. 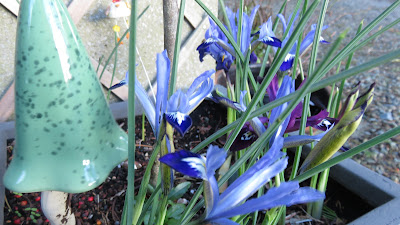 Back to Denmark for this one .... while we had an amazing run of concerts, a very special event will be my main memory of this trip .... In one of my earlier photos of the horses, the young woman leading the horses was looking a bit padded shall we say ... well she gave birth two days later and we got to meet the first grandchild of the house in its first hours in the world.   Wow!   She is so beautiful.   As any of you who read my blog regularly know, we don't have children, and I've never felt any loss or overwhelming desire and of course it's too late to do anything about that now... But seeing this little bundle sparked something in me which I hadn't experienced before.  I wish her so much luck and love and hope that this world will be kind to her - she certainly has a wonderful family around her. 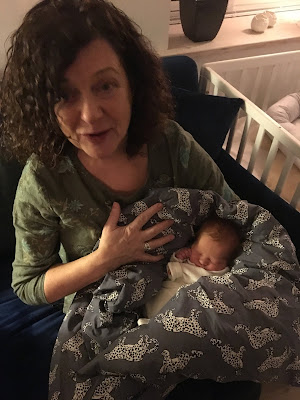 Well that's it from me for this month - hopefully I'll be a bit more organised and regular with my posts in the coming months, but at least this monthly check in gives me a chance to say hello.
Head over to Kate's blog to check out some of the other photo entries and perhaps you fancy joining in yourself.

February has been a very busy month and I didn't even realise it until going back through photos to join in with Kate for the February Photo Scavenger Hunt.

The words this month are all to do with the senses so I'm going to try to connect them somehow to where we were through the month, not in the order Kate listed them.

We started the month at Annaghmakerrig, the artist's retreat in Co. Monaghan and despite both of us having a stinking cold we managed to make progress with several new songs and I had a fantastic break through with some problems I'd been working through.
One of the highlights of staying there for me is joining together with the other people for dinner - it's the only rule of the house.   This particular night there were 14 for Sunday dinner - a poet, a film music composer, a sculptor, someone working with prints, a writer of memoirs, a playwright, an actress working on a new production, two novelists, a painter and ourselves .... I can't remember all the others, but it was such a fabulous melting pot of ideas to share and be inspired by.   The food is fabulous always, but it is the company that makes the difference. 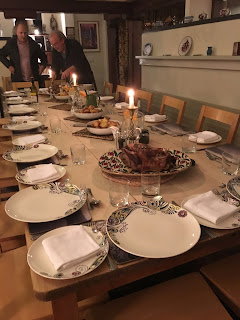 We have been doing lots of shows this month, so sound has been the predominant sense.    In the middle of the month we had a concert near home in Burren in an old converted primary school which is now a heritage centre .... Foolishly, or maybe not, we chose a Thursday, not paying attention to the fact that it was 14th February!!   And when it was pointed out that it was Valentine's Day, we thought, sure, no-one of our age worries about that nowadays!  Hah!  Wrong - I get more calls of apology saying I have to baby sit the grandchildren so my son and his wife can go out to celebrate!  Pfff..... In spite of that we had a lovely night and sang lots of love songs in our set.   The acoustics are simply beautiful in the room and while we weren't packed to capacity we had a splendid audience who were willing to sing along with all our choruses. 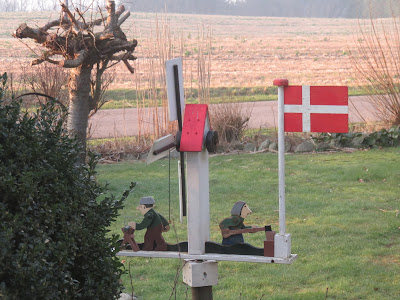 We have been in Denmark for the past week, doing a run of house concerts.   I've been finding the long days very tiring, but exhilarating at the same time.  People come for a meal interspersed with music so we're dong lots of chatting, socialising, discovering people, trying to find solutions for the world problems and Brexit!, partying, eating as well as playing a concert and joining in with the house band.  The level of understanding of English is almost totally fluent here so we don't have to rearrange things quite so much in order for people to follow our stories and what the songs are about.   The Danes are a lovely gentle people, quick to laugh at a joke and so welcoming into their homes and our friends Kanne and Jørn that we're staying with have spoilt us rotten.

The folks here are part of a family that own a horse riding school for training riders and coaches - so 4 horses and a coach etc.   We got a ride around for 20 minutes in the back of one while they were putting the horses through their paces - of course I didn't get a proper photo, but I will try to before we go home.   Later I got to ride a horse, for only the second time in my life.   Beautiful animals although terrifying when they made it run - not funny!   But I'm going back out for another ride today.
it's a lovely feeling moving with an animal.   The house and farm and that of the neighbours and friends has dogs, cats and chickens running around as well a the horses so it's a very touchy feely place to be. 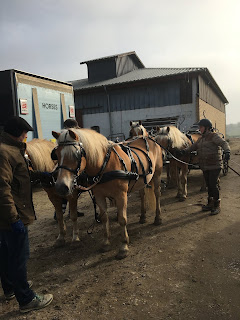 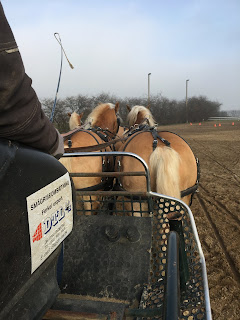 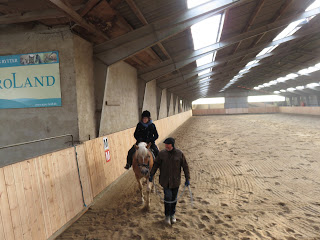 I just had to include this photo for sight - when we were walking through the stables to get to my horse, this one kept poking its head out under the bars to get a sniff - it was having a laugh at us, of that I"m certain - it was the mad eye that started me laughing. 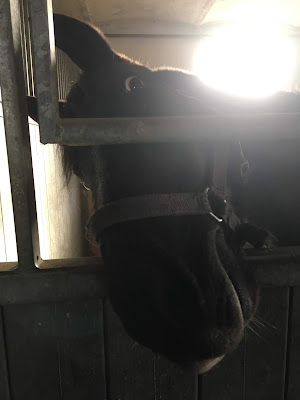 As I write this there are wonderful smells coming from the kitchen downstairs as our hosts get ready for this weekend's house concerts - they will provide food for 48 on Friday night including ourselves and 45 on Saturday - there are cakes coming in and out of the oven and everything smells yummy.

Yesterday we drove north to a different house for another house concert and we travelled up by the coast.
Denmark has miles and miles of beautiful white sandy beaches - in fact you can ride a horse from the border of Germany right up to the northern tip of Jutland (the western of the Danish islands).  Apart from the thousands of bunkers that have been left over after the war, it is an unspoiled clean white sandy beach.   Even though we're only away for a few days I just love getting back to the smell and sound of the ocean, or in this case the North Sea. 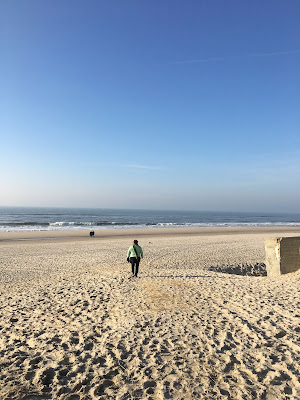 So that's it from me for another while - I'm going for a bit of armchair travelling now to have a look around everyone else's photos.   Thanks as always to Kate for coming up with the words to get the grey matter going and to give a bit of an account of our month.
Posted by Fil at 11:44:00 12 comments: