For quite a while I've been wanting to write blogs about well known women's Irish songs and here's No. 1 in what will hopefully become a series. 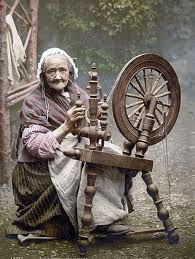 Listen to : Fil Campbell – The Spinning Wheel
From the TV series - Songbirds - the First Ladies of Irish Song

When I first learned this as a little girl I pictured this beautiful young girl gazing longingly out of the window, dressed of course in a perfect long skirt, with long hair and an angelic face!!   The old lady was knowingly sitting in the corner  ....

I can still see the sash window, the moon shining, the wood outside where the young lovers ended up walking ...  Isn't it funny the pictures that stay in  your head with a song:))

The Spinning Wheel is one of the most famous Irish folksongs  and was one of the first songs I learned as a child.

The Spinning Wheel was written in the late 1800s by John Frances Waller (1909-1894) and it's said that the melody is actually French, although it quickly became known as an Irish song.   Really, it was a parlour song that was part of the Anglo Irish tradition, nothing at all to do with traditional Irish music, but more to do with an idealised quaint way of life.  It quickly became a favourite for young girls to sing and instantly brings back memories of a gentler way of life.

Later, it became the first international hit for Mary O'Hara, although she didn't even want to record it.   Delia sang it at her husband's inauguration as the first Irish Ambassador to Australia and she said that if it's sung correctly you should feel the spinning wheel turning.  In our TV series - Songbirds, the First Ladies of Irish Song - it was the only song that we found that had been recorded by all the featured ladies - Ruby Murray, Margaret Barry, Bridie Gallagher, Delia Murphy and Mary O'Hara - and they all sang it in very different styles.

The maid shakes her head on her lip lays her fingers
Steals up from the seat, longs to go and yet lingers
A frightened glance turned on her drowsy grandmother
Puts one foot on the stool spins the wheel with the other

Lazily, easily swings now the wheel round
Slowly and lowly is heard now the reel sound
Noiseless and light through the lattice above her
The maid creeps then leaps to the arms of her lover

******
The songwriter:
John Francis Waller (1810 - 1894) was born in Limerick, educated at Trinity College, Dublin and was called to the Irish Bar in 1833. He became a contributor to and ultimately editor of the Dublin University Magazine, usually writing under the pseudonym of "Jonathan Freke Slingsby"


He published several volumes of poems and also wrote popular songs, including Cushla Ma Chree, The Spinning Wheel and Song of the Glass. He was responsible for the explanatory notes and a life of the author in a new edition of "Gulliver's Travels" written by Dean Jonathan Swift.

Connected
If you're interested in spinning as an art I found this fascinating blog from a lady in Scotland.