I Am Not At War With Anyone

Fiddlers Green Festival finished last night and a great week was had by all - there was so much good music and wonderful weather set it all off ... We're all in need of a rest now as we say goodbye to the visitors from England, Scotland, Germany, Luxembourg, the Netherlands, Denmark and I'm sure many more that I didn't get to meet.   Our own gigs went off really well - yesterday we played a concert of new material from our forthcoming CD with a guest uilleann piper ... hopefully I'll have a video from that soon.  And my singing workshop on Friday was really good fun - multi lingual group of singers.

You come to the end of a week like this and think you've missed so much, because there's so much happening and you can't possibly get to everything ...

One of the highlights for me was to hear Luka Bloom sing - he was wonderful - apparently simple songs but lyrics that really get to the point.   This was his opening song - although it's sung in this video by a children's choir -  he wrote this song to protest against the war in Iraq and decided to write it as a child would see it.   And somehow I think it's a fitting song at the minute.

I Am Not At War With Anyone  by Luka Bloom

I am not at war with anyone

And here's Luka live from a TV show, playing with Steve Cooney who lives here in the village - a guitar wizard.
This song is called Heart Man.   We hear so much news about bad men - this was written for all the good men in the world.

I've been absent from blogging most of this month - what with feeling really under the weather, and family stuff and festival rehearsals and lots of visitors - andt I'm still feeling jaded and out of sorts ...  However, it's good to get time to pause and reflect and I'll be coming back with a few more reviews in the coming days and weeks.

And finally, the reward of our wonderful summer this year, my passionflower has bloomed!!
Such a strange looking flower.
It has been more than 12 years since it last bloomed - so it's well worth the wait.
I just love it :)  It makes me smile :) 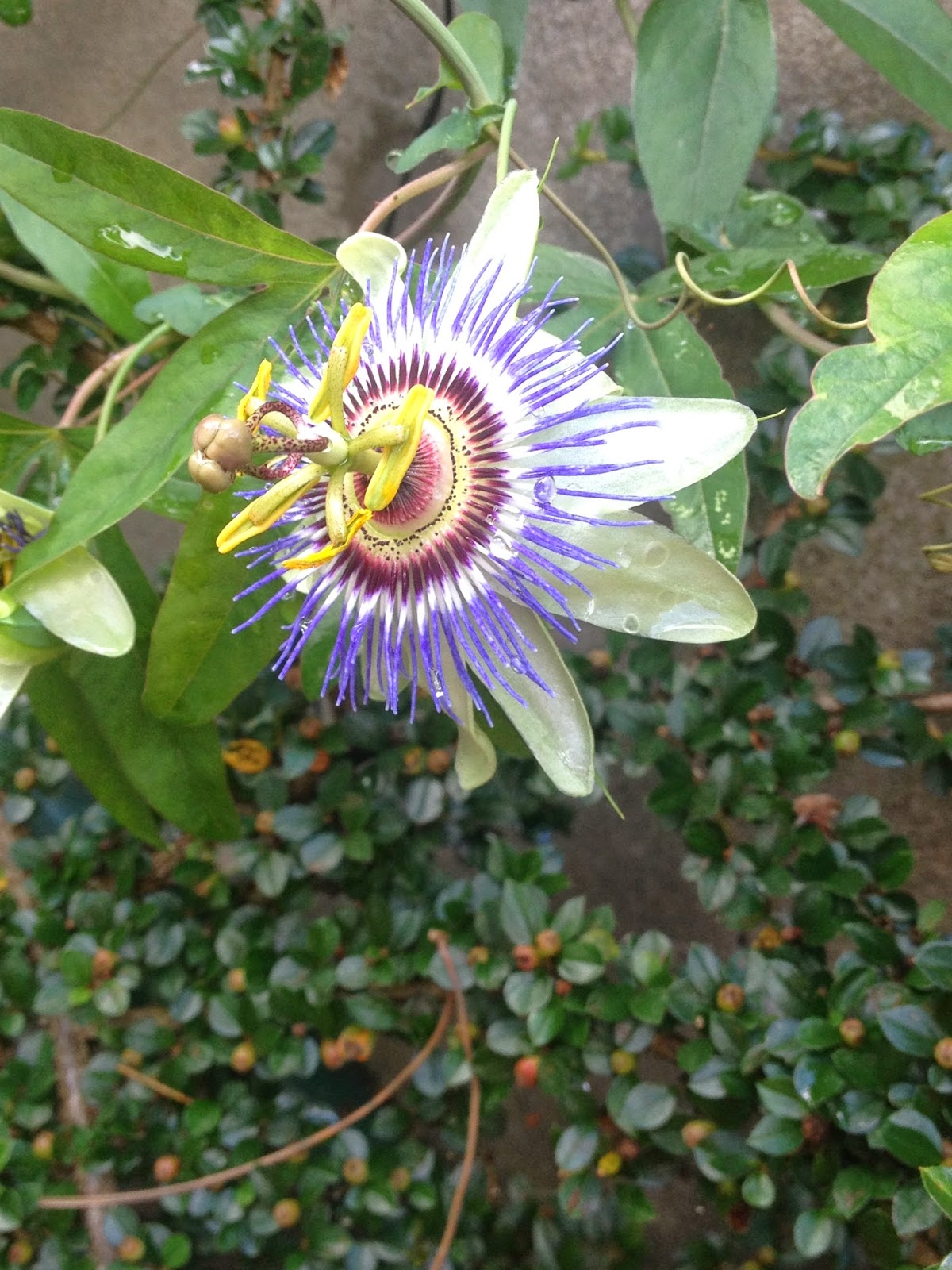 Last Friday night was the launch of this year's Fiddlers Green Festival which will take place between 20th and 27th July with a few small events on the Friday and Saturday before hand and probably a hangover party the Monday after .... so 10 or 11 days in total ... It's time to get into training :)

This is a unique festival in that it is organised by lots of different groups of people and then put together in one umbrella programme.   The main concerts each night are mostly folk - the opening night features 20 singers and 20 songs - all local, mostly young people, singing one song each as a fund raiser for the festival.  Luka Bloom is playing Monday night, Tuesday sees the Henry Girls, Wednesday is a new group to me - NASC - which has a Scots Gallic singer and an Irish language singer and some amazing musicians that play both classical and traditional.

Thursday night sees The Music of Healing combined with the Creative Arts Award - this is a very special night which was first created during the Troubles by Festival President Tommy Sands, as a platform for two opposing politicians to have a stage together and answer questions to an invited audience - there have been some strange combinations on that stage down through the years and it has truly been a place of healing.   The song from which the event title came, the Music of Healing, was co-written by Pete Seeger and Tommy Sands and looks to a future that we could have if we could get along together here.  Tommy's Music of Healing project has travelled the world since and is a peace education project at the Irish Institute of Pittsburgh.
About 5 years ago, the Creative Arts Award was incorporated into the evening - and this year the recipient is Martin Lynch, one of Northern Ireland's best known playwrights, who has made a profession out of writing plays for the man in the street rather than the intelligensia.


Moving on, Friday night at the Festival sees another award concert - the Hall of Fame - this award has been given for 27 years to a musician or group who have furthered the development of Irish music across the globe.   This year it will be given to Cherish the Ladies, a New York based traditional Irish band of women who are really at the top of the folk and traditional tree now.   Joannie Madden the founder of the band lead the St Patrick's Day Parade in Yonkers, NY this year.   This video is from a gala spectacular on PBS so the band are augmented .... but you can clearly see the brilliant musicianship...  It'll be a brilliant night - they always have dancers with them and the singer is usually kept secret until the night of the concert.


Saturday night's concert is still a surprise - but rumours are circulating about a well known Scottish performer - and then the main stage closes on Sunday night with a regular concert by the Sands Family.  Oh and I should mention that we're playing Sunday afternoon at 3.30.

Around those headline concerts there are pub sessions, an afternoon concert series which Tom and I are included in, a lunchtime folk club, an outdoor stage, several art exhibitions, open mike sessions, a couple of organised walks through the mountains, an event on the water where local boatsmen will take you out for a spin on the bay, a Duck Derby!!, lots of pop up cafes, readings, films and a complete children's programme with games and events for the very young up to mid teens.
Posted by Fil at 17:14:00 6 comments:

Pay It Forward Art Challenge for 2014


My blogging friend Deborah has put out a challenge for a Pay It Forward Art/Craft Challenge that I couldn't resist joining in with.   I did one of these a few years back with my Facebook friends, and while I found it a bit stressful at the time, it was great fun and so lovely to receive hand made things from people I hardly knew.  In the past month or so, I've been craving a bit of time to meddle with some arty crafty things so this is a perfect challenge to satisfy that.

Here's how this was worded on Deborah's site ... and as she pointed out, this was probably first done on Facebook but it transfers easily enough.

I promise to make a small work of art for the first five people who comment on this post and say “YES, I want in”. A ‘like’ alone is not enough of a commitment, nor is a comment about thinking Pay It Forward is a great idea. You must in turn post this as your status update and make something for the first five who comment on your status. The rules are simple: – It has to be your work, made by you, and the recipient must receive it before 2014 ends. – It can be anything art-based: a drawing/illustration or a conceptual work of art, a photograph, a knitted item, cross-stitch, paper maché – or anything in between. I’m paying this forward thanks to Deborah at Temenos of the Blessings.


I have absolutely no idea at this point what it is I'll make but for the first 5 people who sign up to this, I'll send you something hand made by me, in the post, before the end of 2014.  Let me know in your comment, what your favourite colour is too .... and I'll see what I come up with:)

Have you had any experience of these before?