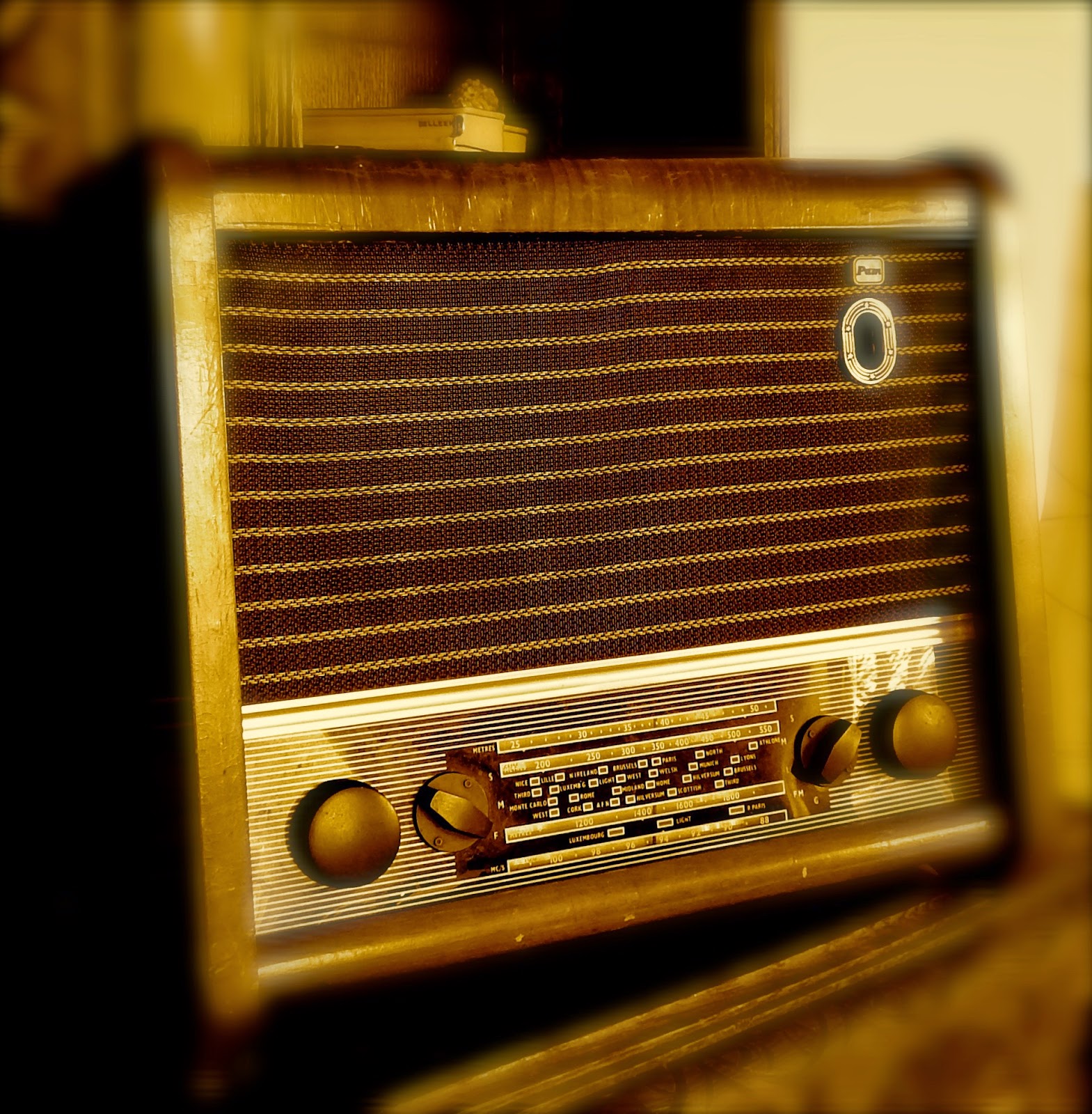 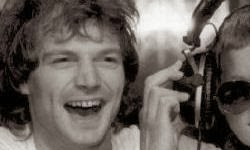 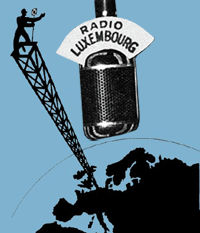 When I boarded at school I had a radio under my pillow at night.   The biggest thrill of my 13 years was when Peter Powell on Radio Luxembourg played a request for me one night :)  Made my week.

Later I joined up with the fledgling Downtown Radio outside  Belfast in the PR department and later still got the wonderful opportunity to be the voice of folk music for several years on BBC Radio Ulster.

Today marks the birth date of the inventor of radio - Guglielmo Marconi.  And did you know his mother was one of the Irish family Jameson, they of the whiskey distillery fame?  And supposedly she was the greatest supporter of this boy who had no aptitude for school, couldn't even be bought into University but who became fascinated with electricity.  Like some of the worlds greatest entrepreneurs his education was minimal but his curiosity and passion was what won out.

According to an article in Ireland's Own magazine a few years back, his mother Annie Jameson was a wonderful singer and was offered an engagement at Covent Garden Opera House.   But her family refused to let her appear on stage "to entertain the public"!  How ghastly!!  However, they did agree to let her go to Italy to study singing and it was there she met and married the wealthy landowner Giuseppe Marconi. 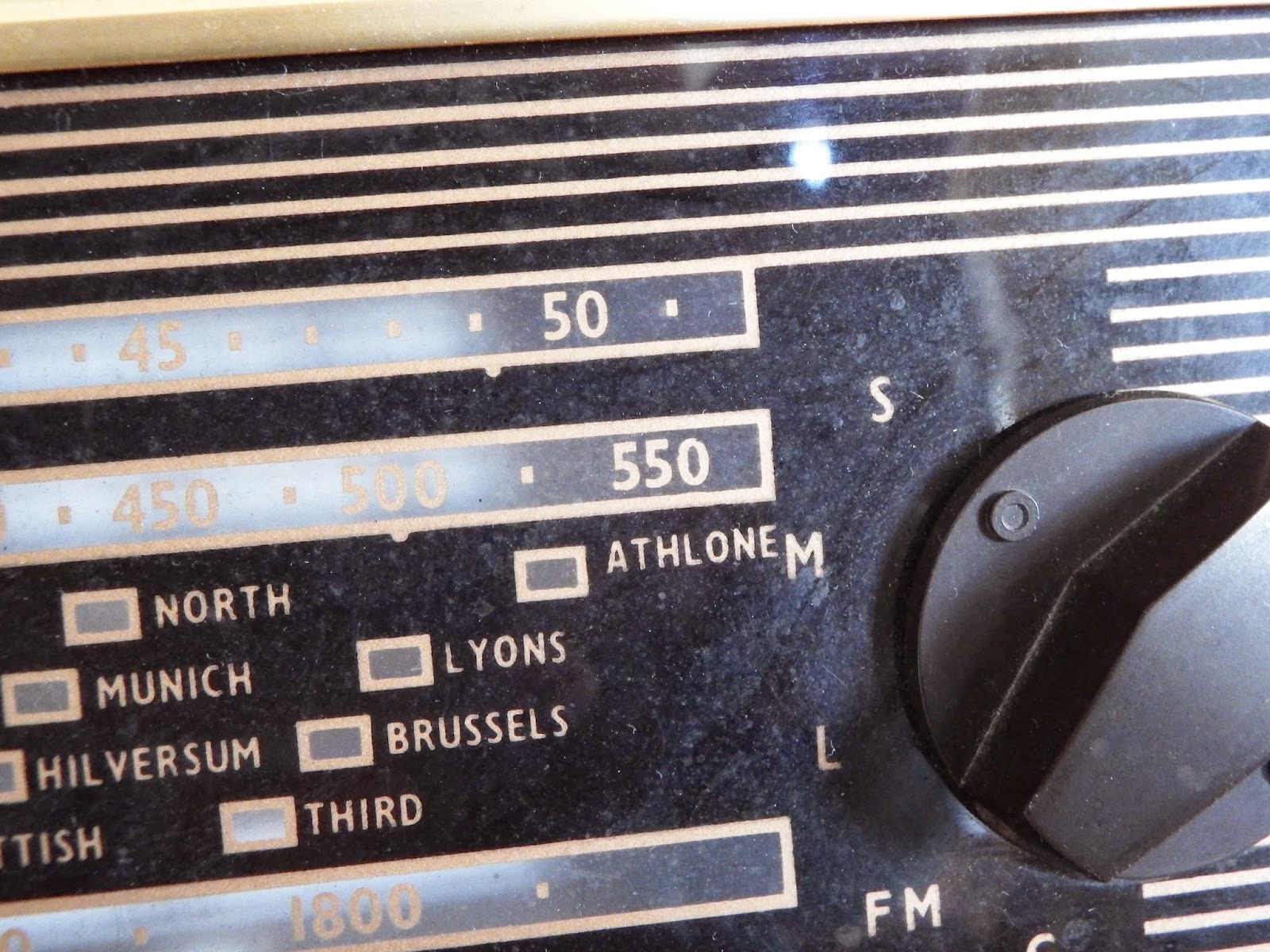 Guglielmo was born on April 24th 1874, and in January 1895 he sent the first signal 30 feet away into a neighbouring room with his mother as the only witness.   By the end of that year he was able to send signals across a distance of a mile on his homemade very primitive apparatus.

With financial support from the father and encouragement from and accompanied by his mother he moved to London as the device, he reckoned, was ideal for naval telegraphy and at that time England was the greatest naval power in the world.   That, together with the fact that the Jameson family were very widely connected allowed many doors be opened for him.

By September 1896 he had covered a distance of 8 miles, shortly followed by successful transmission across water.

And it was on the 26th April, 1900, that he took out the patent for "Tuned Syntonic Telegraphy" an invention which "introduced tuned circuits to wireless for the first time, and enabled a wireless set to be tuned to a particular station just as we do today".

Around that time scientists and physicists argued that radio couldn't work over the horizon - that it would only go in a straight line.   Of course Marconi proved them wrong after persuading his company to believe in him and with the £50,000 that they raised - a huge fortune in those days - he built two wireless stations and transmitted and received the Morse letter S from Poldhu in Cornwall to Newfoundland, a distance of 12,000 miles.

Marconi wasn't the first inventor of radio, but he was the first to see the commercial practicalities and after all the excitement of his cross Atlantic experiments he persuaded some shipping companies to use his system on board ship, saving more than 1700 people when the SS Republic was in a collision with an Italian tanker in January 1909.   Later, after the Titanic disaster, and his radio system being responsible for the rescue of the survivors, it became law that every ocean going ship carrying passengers should have a wireless system that would be manned 24 hours a day. 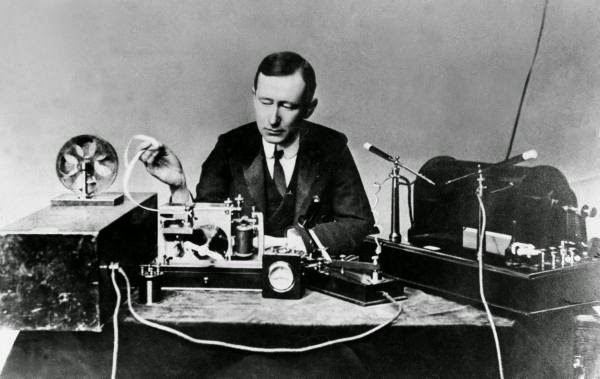 Marconi shared the Nobel Prize for Physics in 1909 with the German physicist Karl F. Braun.   In his acceptance speech, it is alleged that he said that he was more of a tinkering engineer than a physicist and didn't really understand how his system worked.  Later Nicholas Tesla claimed to have invented radio much earlier and several of Marconi's patents were invalidated in the American courts.

Nonetheless he is the man who made the commercial radio that I've loved all my life into the reality that it is today.

Further information can be found here on this History Channel page 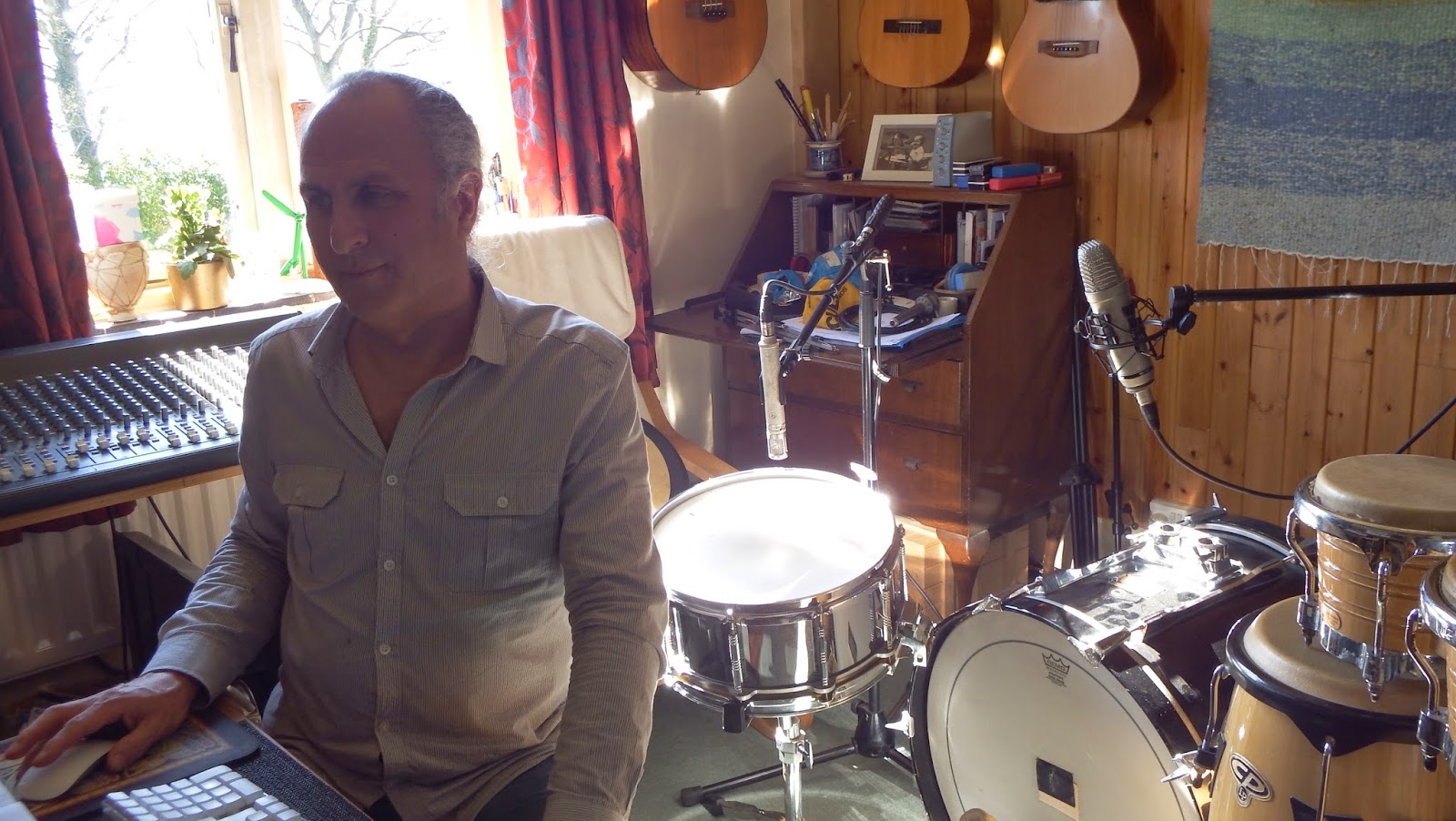 Today is the turn of percussion to be added to the songs.

I hear footsteps every so often, heading out to various store places and returning with some rattly or shaky :)  Little touches to add colour and rhythm to the guitar tracks that are already in place. 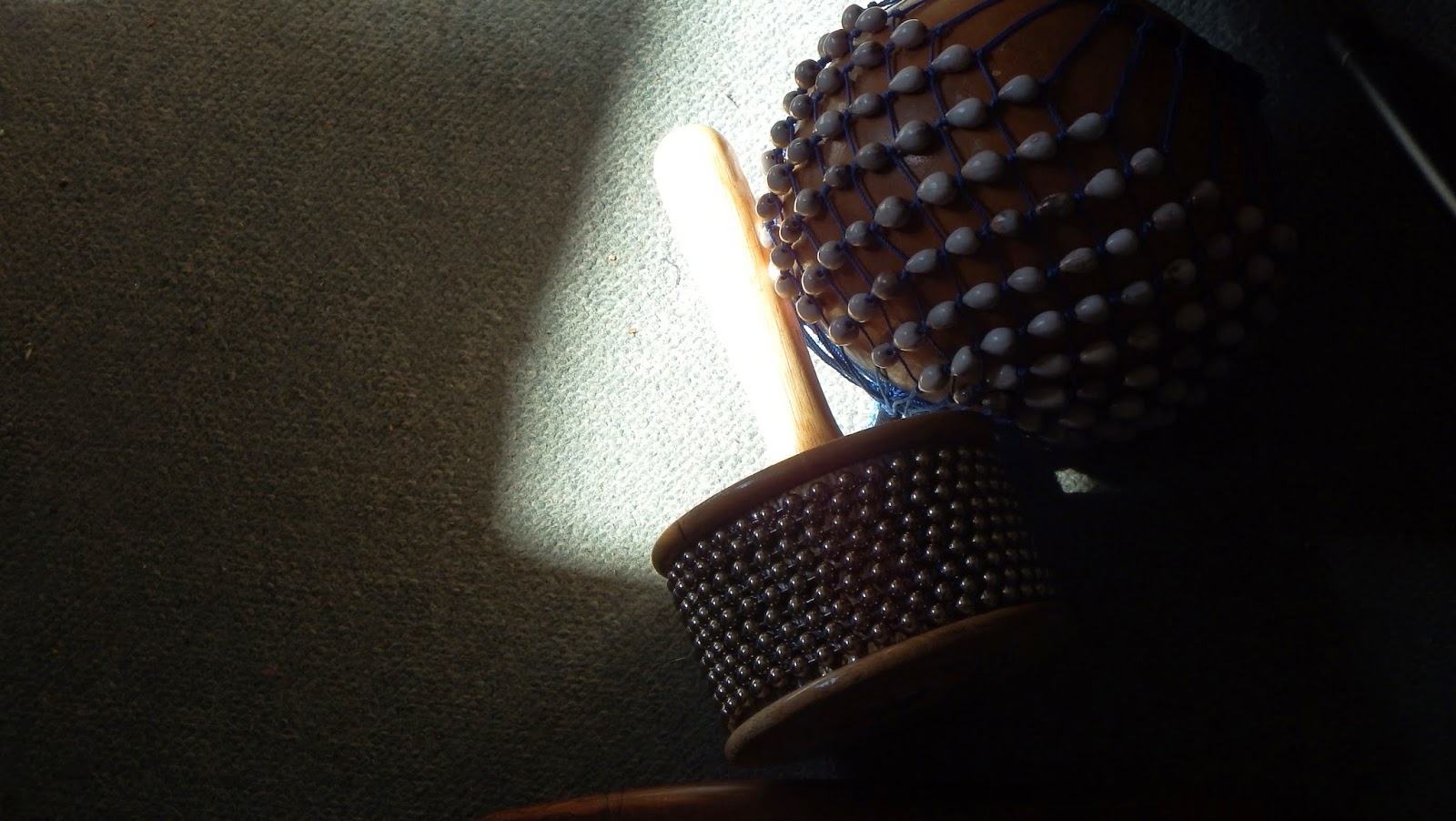 The studio started off this morning with a small drum kit and a set of congas, but I bet if I go in now there'll be a lot more things lying around. 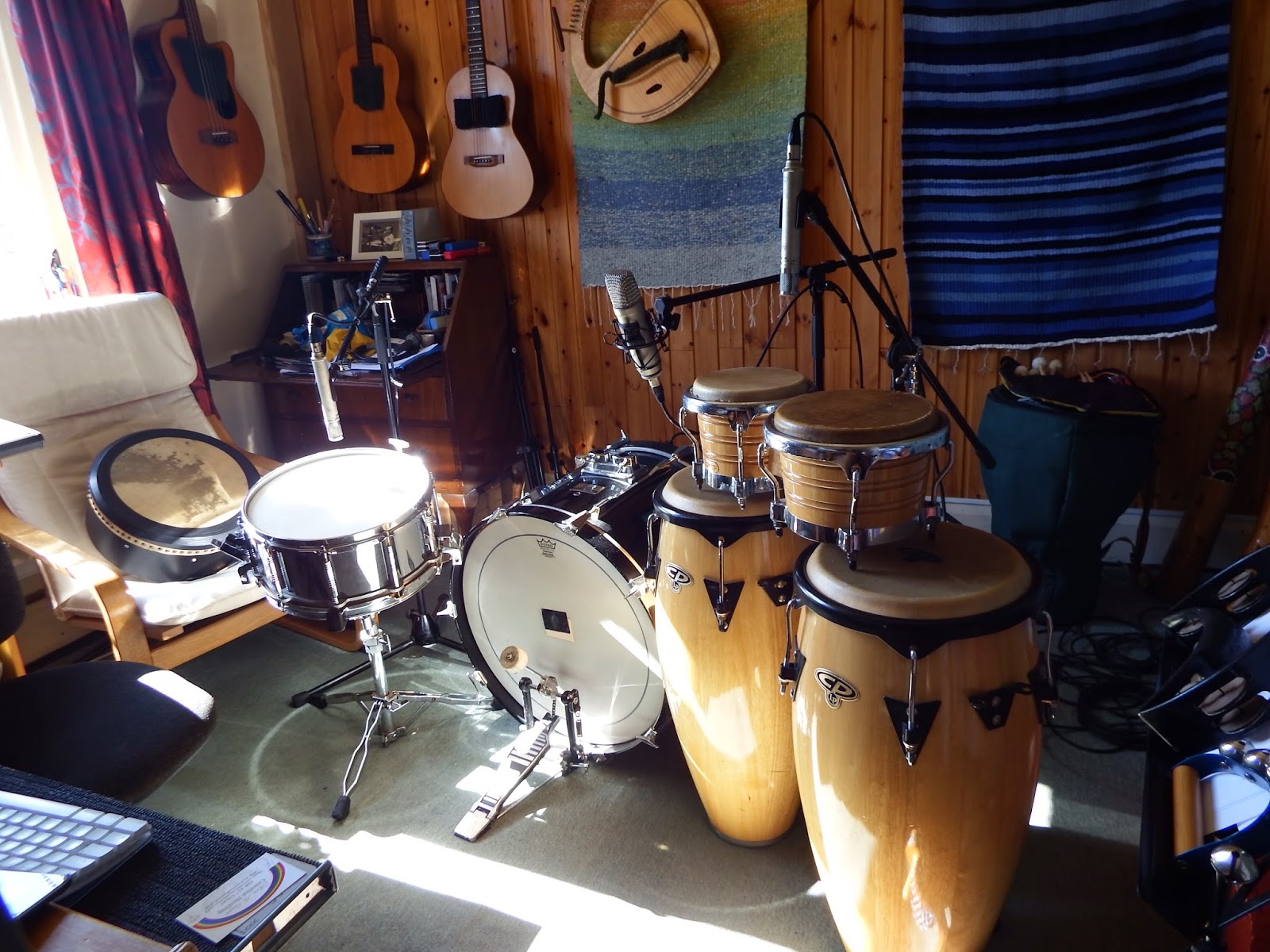 I'm staying out of the way and enjoying an unexpected day off at home - we were due to be off visiting but that got postponed much to our relief this morning.   It's a rare treat to have a Saturday or Sunday at home.   So I'm away catching up on bits of things and am studiously ignoring all the cleaning that could and should be done :)

Our lawn is covered with wildflowers at the minute ...

My favourite is Heart's Ease.   Isn't that a gorgeous name for a flower?  It's a type of tiny pansy .... And according to Wikepedia it has several names - I love "Come-and-cuddle-me" - that'll do lol 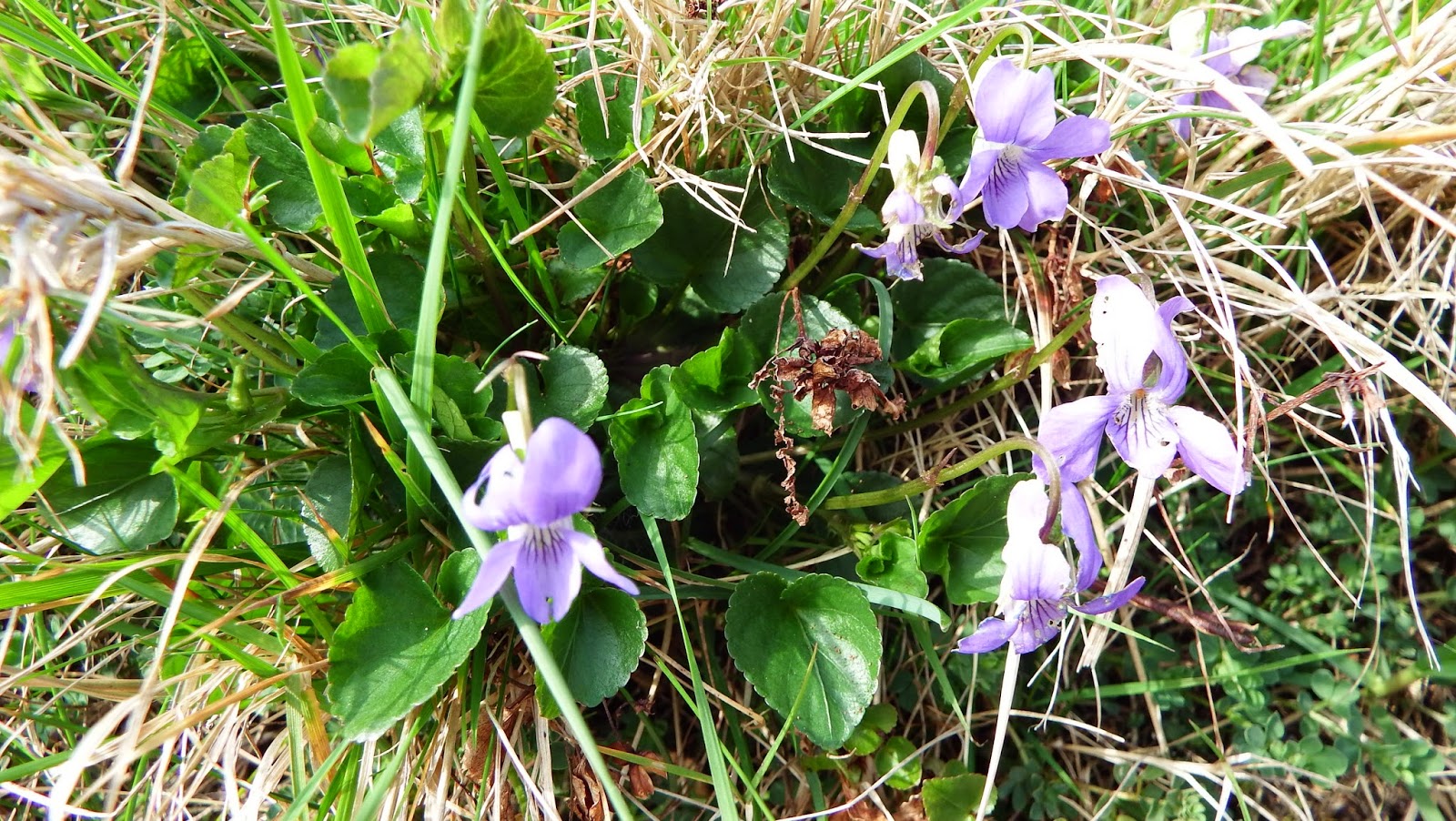 There's an old song that mentions Hearts Ease
It's part of the Sam Henry collection collected back in the 1800s.  I sang it for a wee while ..

The song is The Apron of Flowers

Now I tell you the reason why
Because he had more gold than I
But the gold will melt and the silver fly
And perhaps he'll just be as poor as I.

There is an alehouse all in this town
Where he goes in, and there sits down
And he takes a strange girl on his knee
And he tells to her what he once told me. 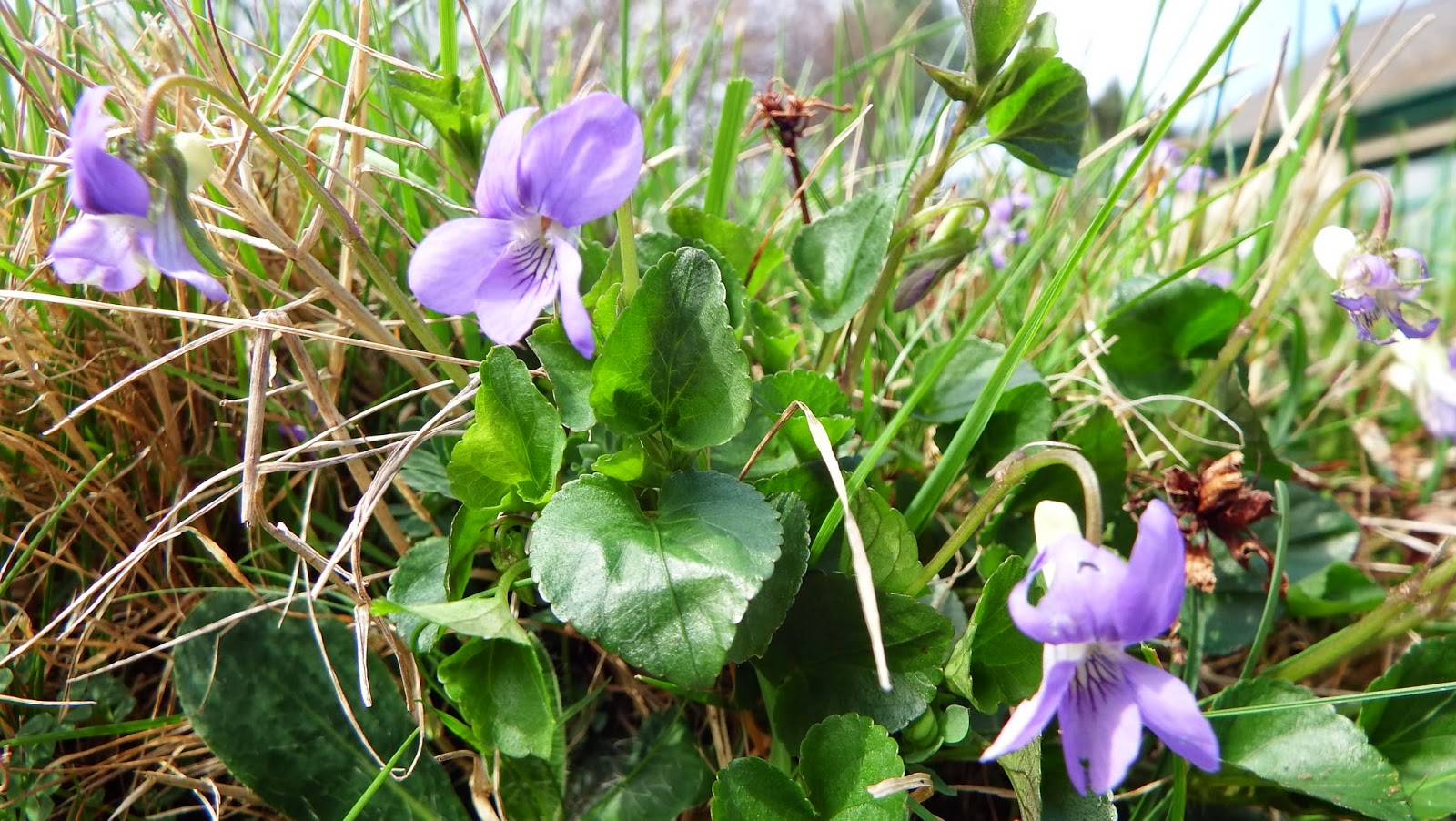 But there's a flower grows in this place
And some does call it the heart's ease,
And if I could but this flower find,
I would ease my heart and my troubled mind

Unto the green meadows there I'll go
And watch the flowers all as they grow
And every flower I will pull
Until I have my apron full.


The lawn really needs to be cut ... but these flowers in the grass are so pretty 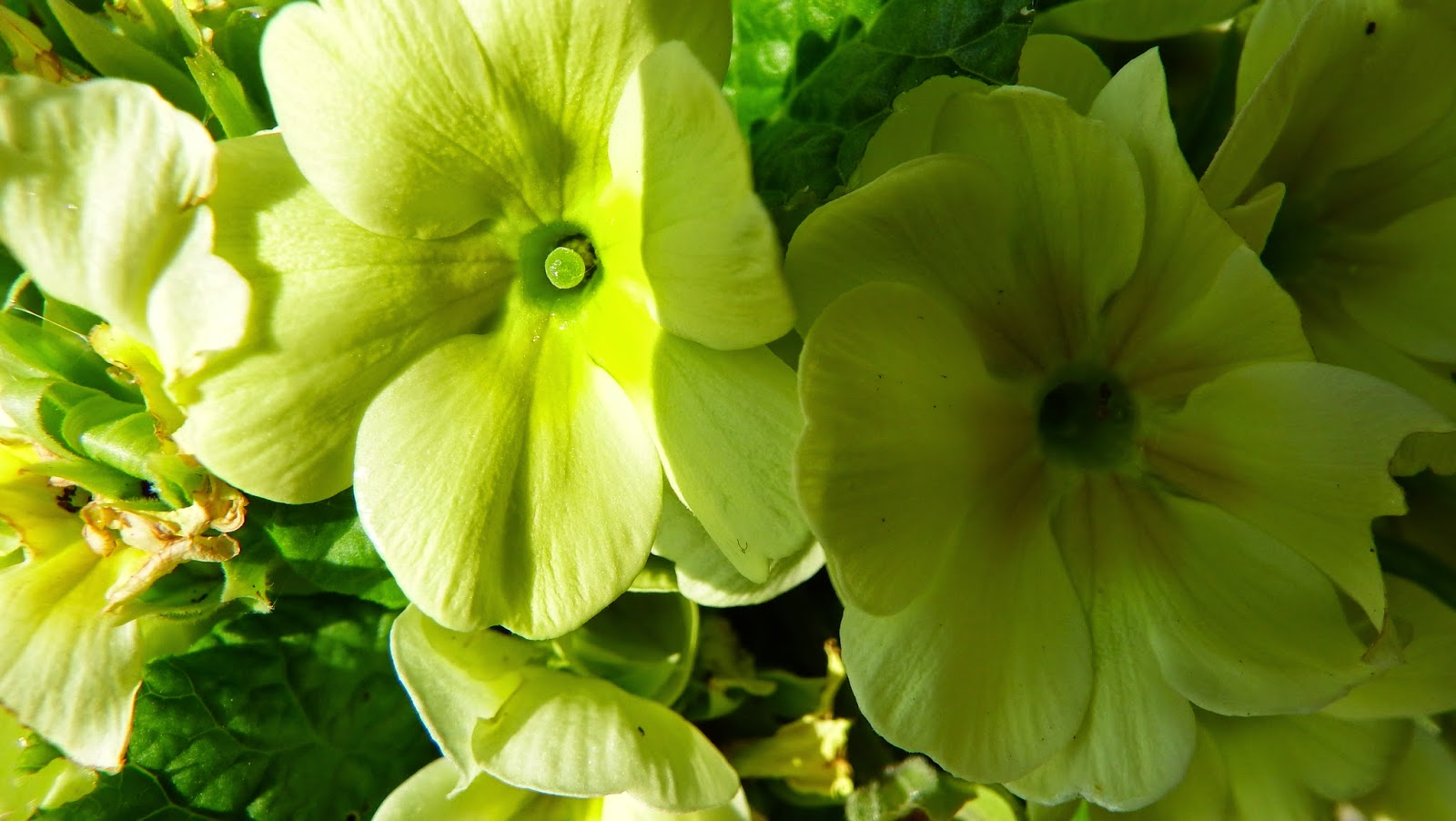 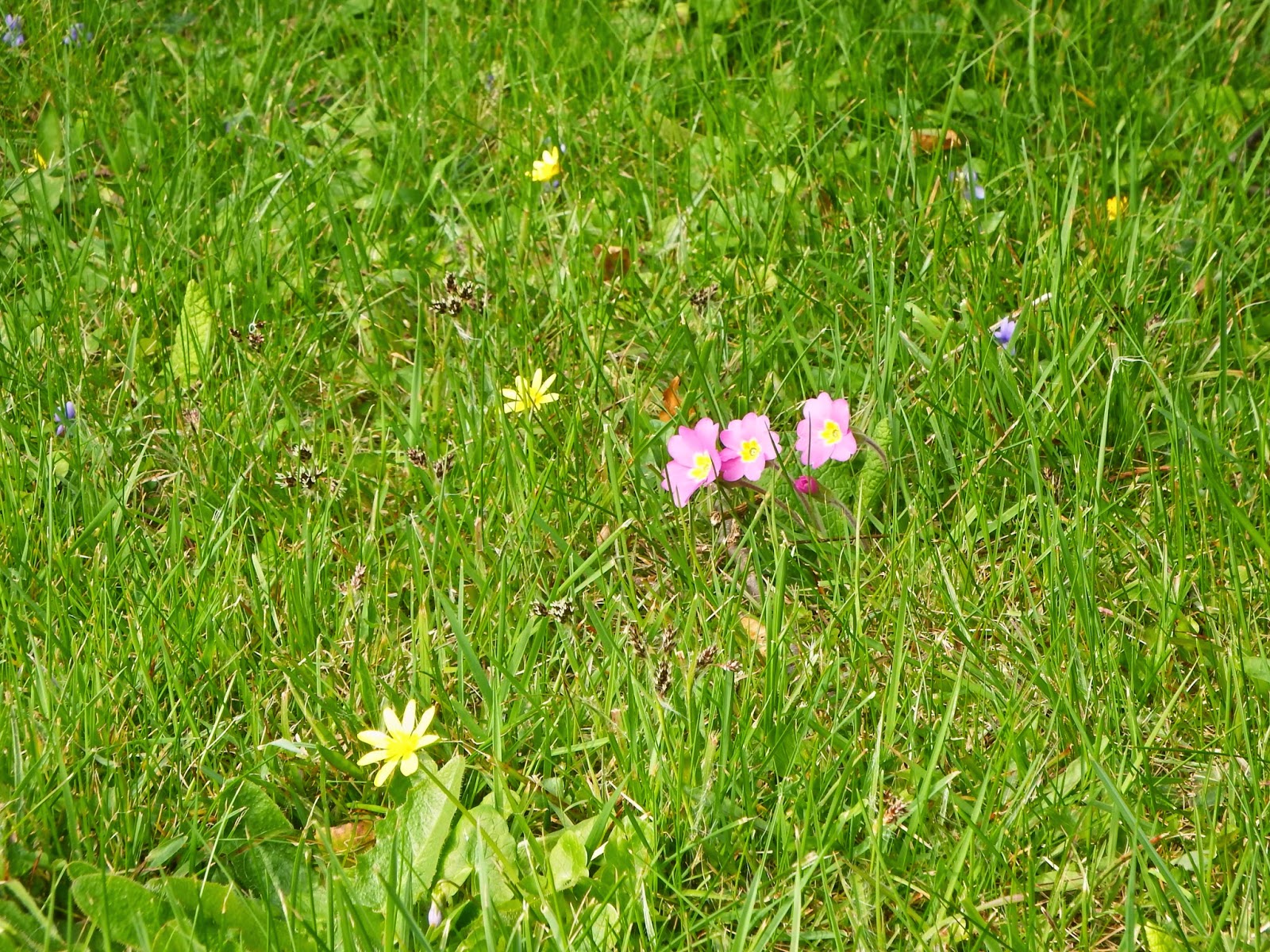 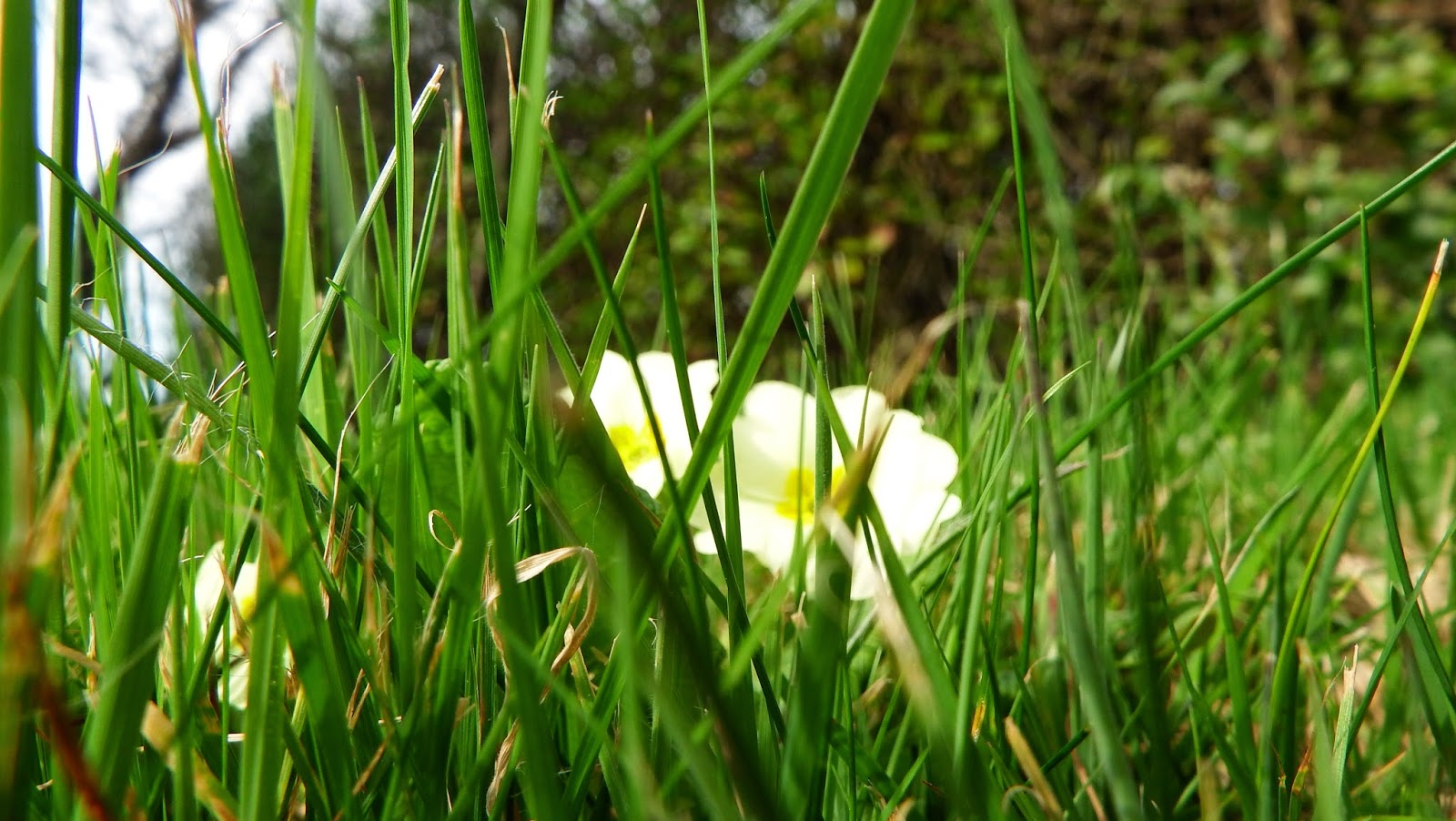 We're also tortured with these ...... sycamore seedlings.    There are millions of them ... through the lawn, on the paths, in the hedges... And if you don't get the root of them out, in no time at all there's a wee tree well settled in for the duration... Little rotters... Sunshine at the minute is sycamore weeding.

So after a lovely week out of routine, everything's back to normal again here tomorrow.   We've spent today in the studio fixing a few things from the guitar sessions last weekend and are now ready for the next bunch of musicians to come in and add their magic - hopefully the bass will be recorded on Wednesday.

And we have our next performance of the Emigrant Woman's Tale on Tuesday night in Belfast.   Looking forward to that.   Rehearsals tomorrow to refresh our memories. We got such an excellent response to our debut in Rostrevor a few weeks back.   It'll be interesting to see the differences between a city and a village audience.   I'll put a few tracks up from it to let you hear what Csilla's voice sounds like reading her lovely poems and to let you hear one or two of the songs.

Have a lovely week whatever you're doing.

When we were children our big treat was a day at the beach - in either Bundoran or Rossnowlagh.

Rossnowlagh was special because it had a really long beach - there were always sandwiches and tea from flasks, no shops worth speaking of and it was great for building sandcastles.   And as evening approached there was always the spectacle of someone getting their car stuck in the sand having parked in the wrong place - that's a mean memory really - but it happened to everyone - once!

On Easter Monday we went for a walk on Rossnowlagh Beach.   The place was packed. 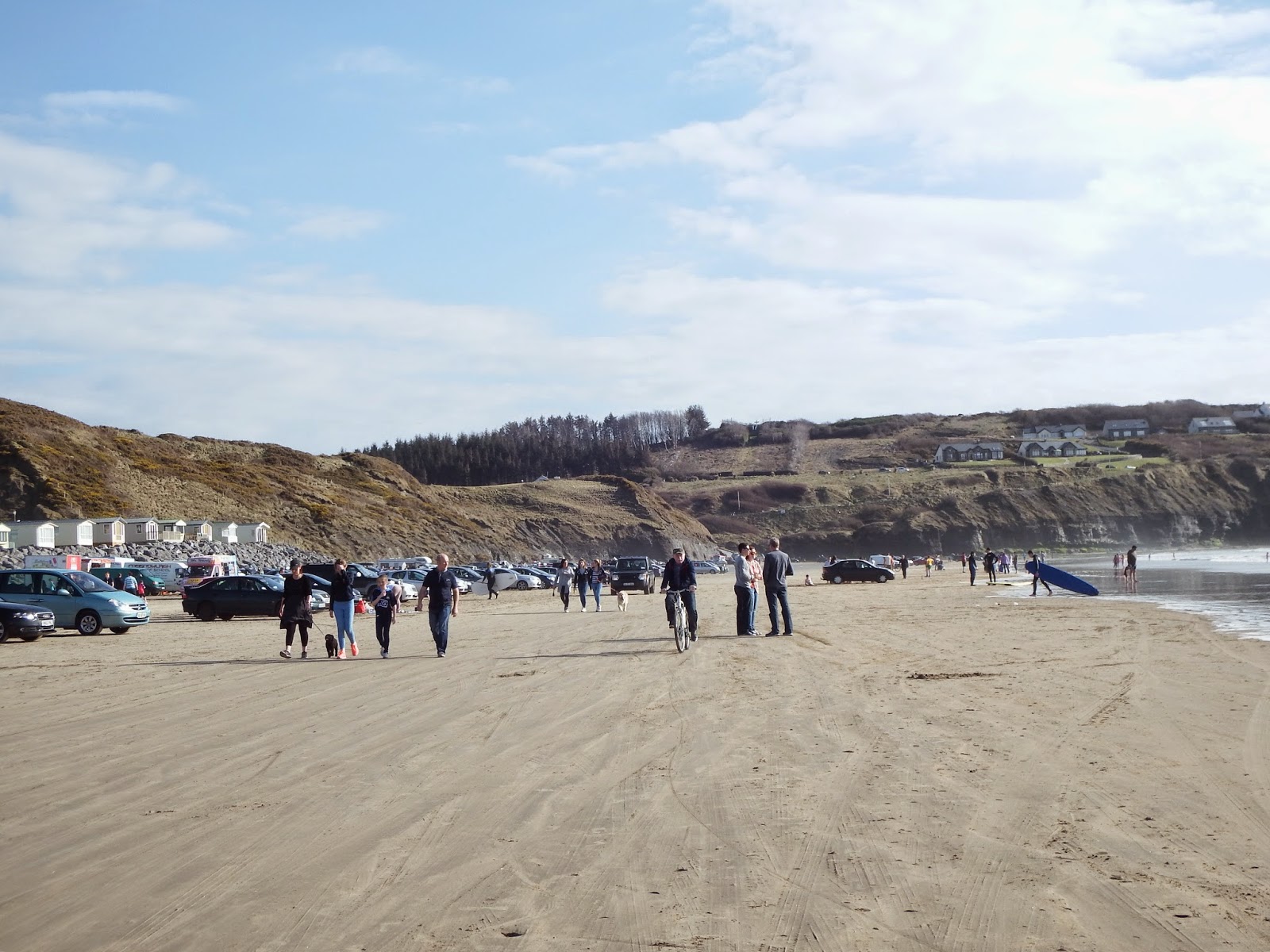 There are still no shops, but a few more caravans selling ice cream and now they've become more modern - someone was selling crepes.   And a van selling wetsuits and the surfing experience.  And there were still the young fellas getting their cars stuck.  Thankfully all were rescued before the tide came in fully. 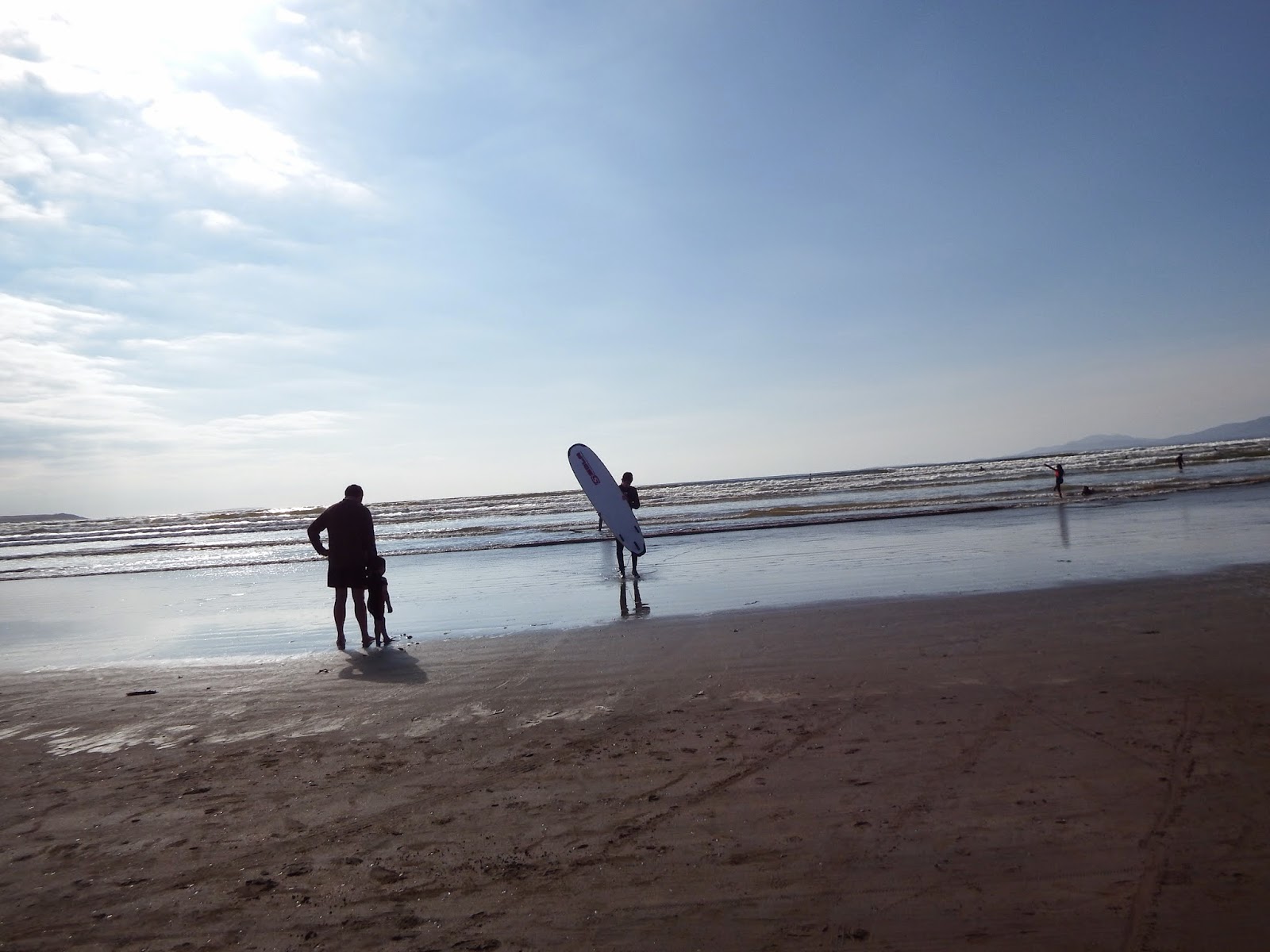 Rosnowlagh was where I learned to drive.  In the South (of Ireland) you didn't need someone with you when you were learning to drive.  So we'd head for the beach and you had miles of great sand with no people around in Winter time and nothing that could be hit.  Later we'd take the dog there - let him run, while we'd practice our driving.  Poor Spot was wrecked at the end of it. 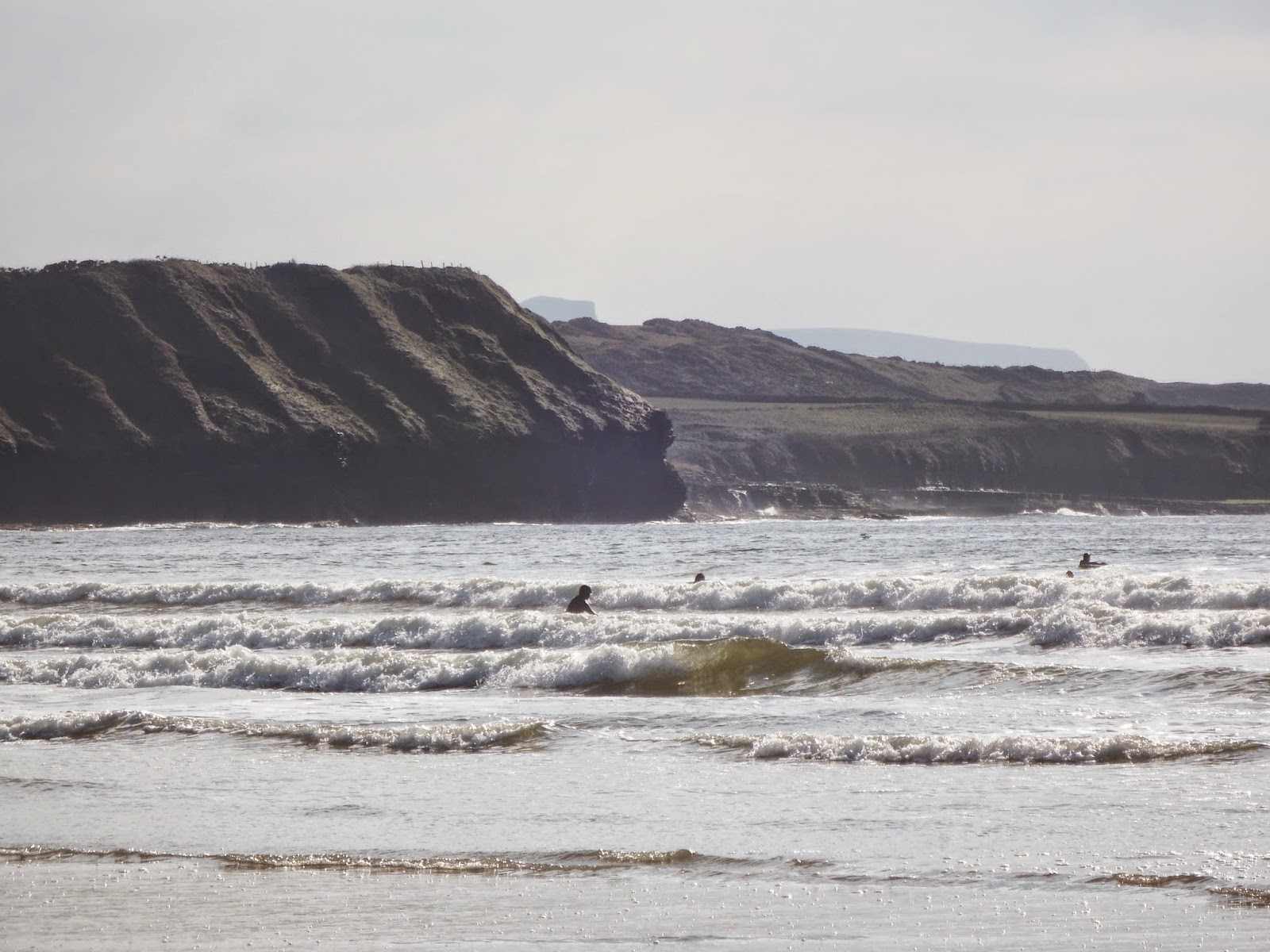 Today there were loads of people in the water - lots of people on surf boards, body boards and canoes and several kids just in splashing about.   It's very early in the year to be in the Atlantic, but they had wet suits on.   We were well wrapped up to even go walking and the sight of bare shoulders and bare feet paddling in the water just made me shiver - I must be getting old :)

We're trying to hold on to as much of this week as possible without getting back to work.  I need to get back into the studio over the weekend for a few hours but that's all until Monday.  Still, it's good to be doing what you love.

It's been great catching up on all your blogs for the A to Z challenge.   I must say I'm not missing it this year - it was the right decision for me to sit it out.   But there's some fascinating themes.   I'm loving Hilary's essays on aspects of Cornwall and Deborah's look at the various faces of the Fool archetype.

Email ThisBlogThis!Share to TwitterShare to FacebookShare to Pinterest
Labels: Rossnowlagh 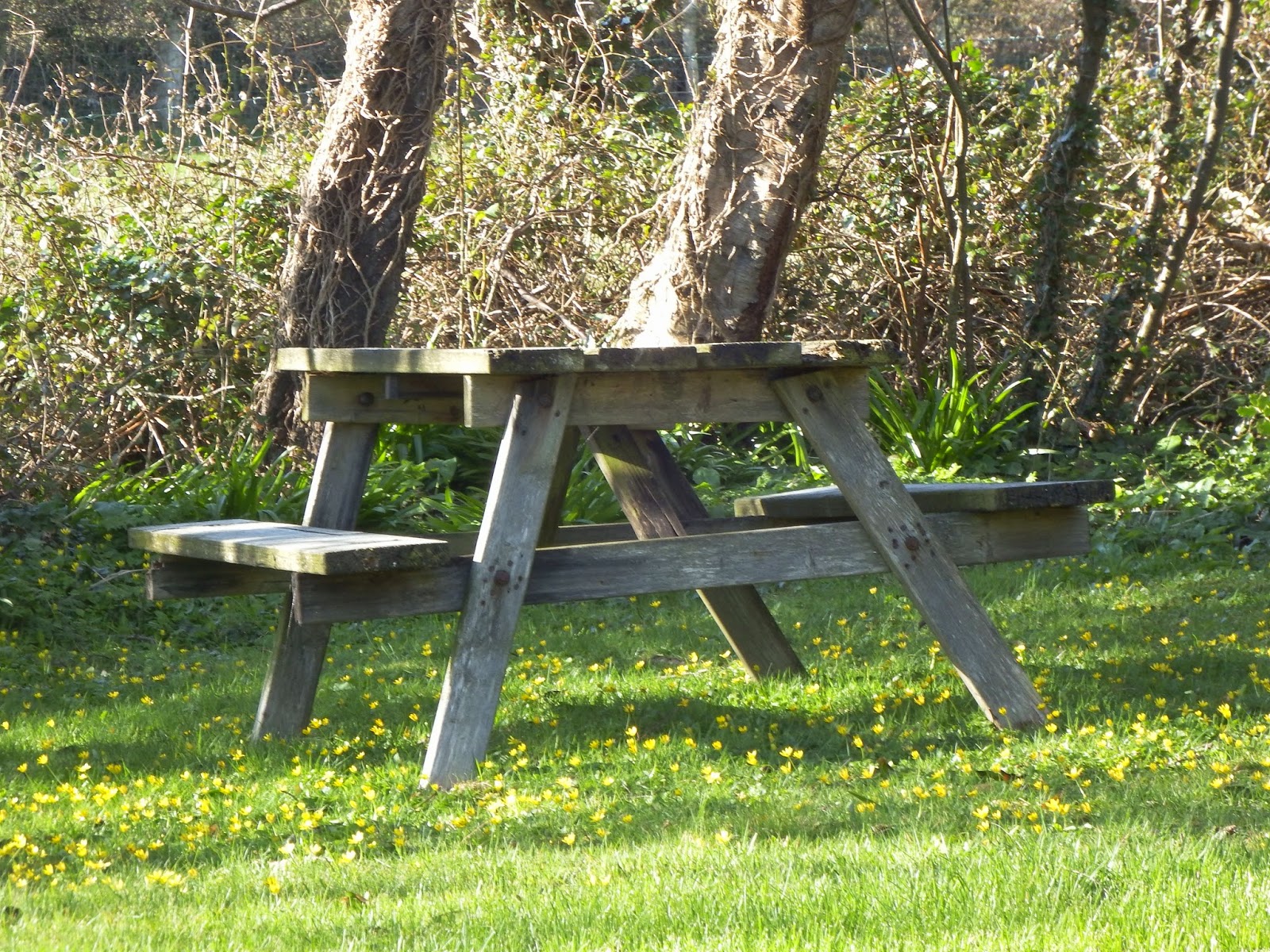 Happy Easter my dear blogging friends.  I hope you have a lovely weekend and that the sun shines on you and yours. With Easter being so early this year it's not quite as warm as we'd like, but the sun has been shining gloriously here all day. 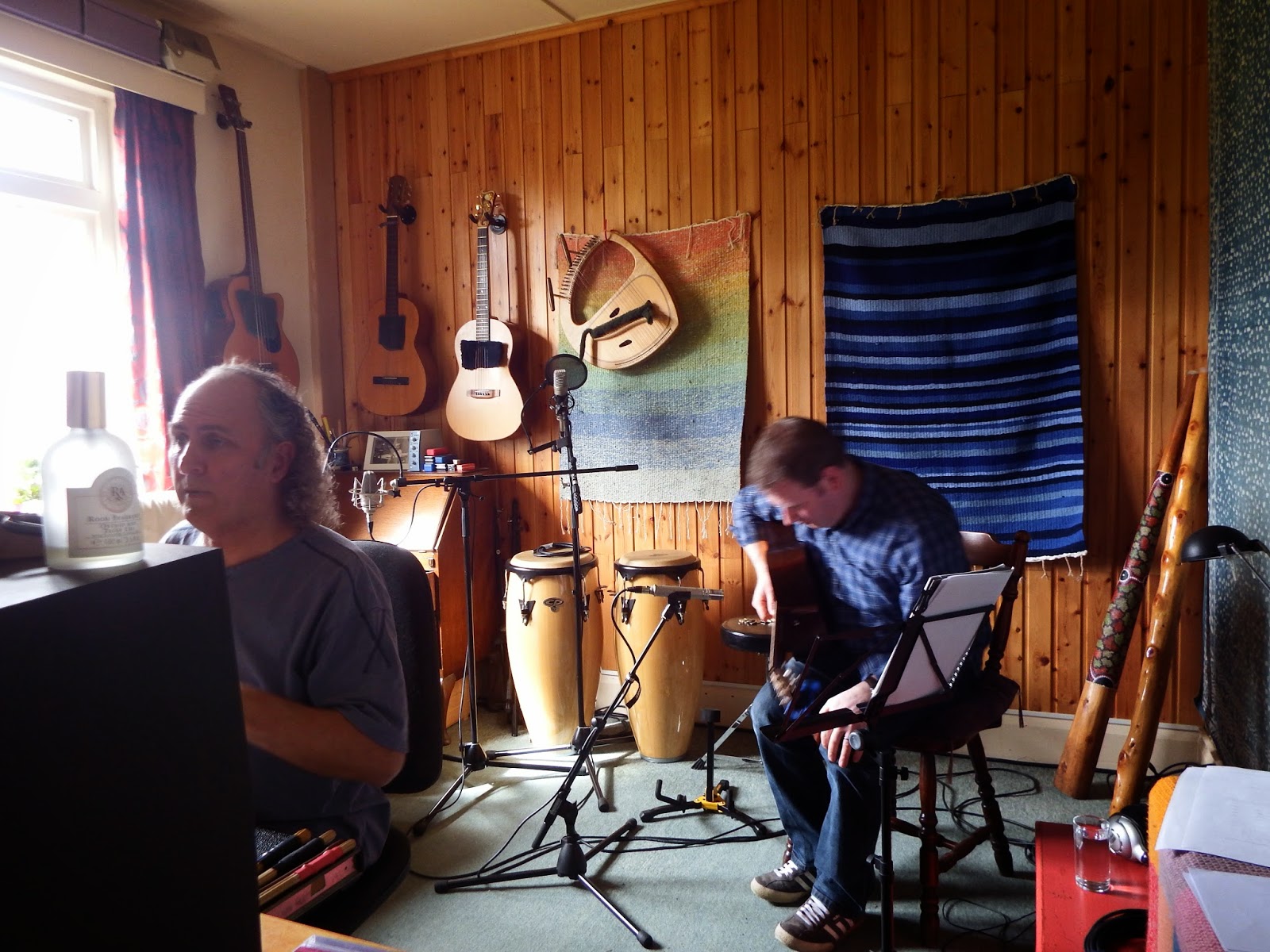 We've been in the studio all day, finishing up a great guitar session for the new CD.  Gerard Thompson has been doing the honours and his playing is just lovely.   A lot of my own playing has stayed too, something I'm very pleased and just a tad proud of. 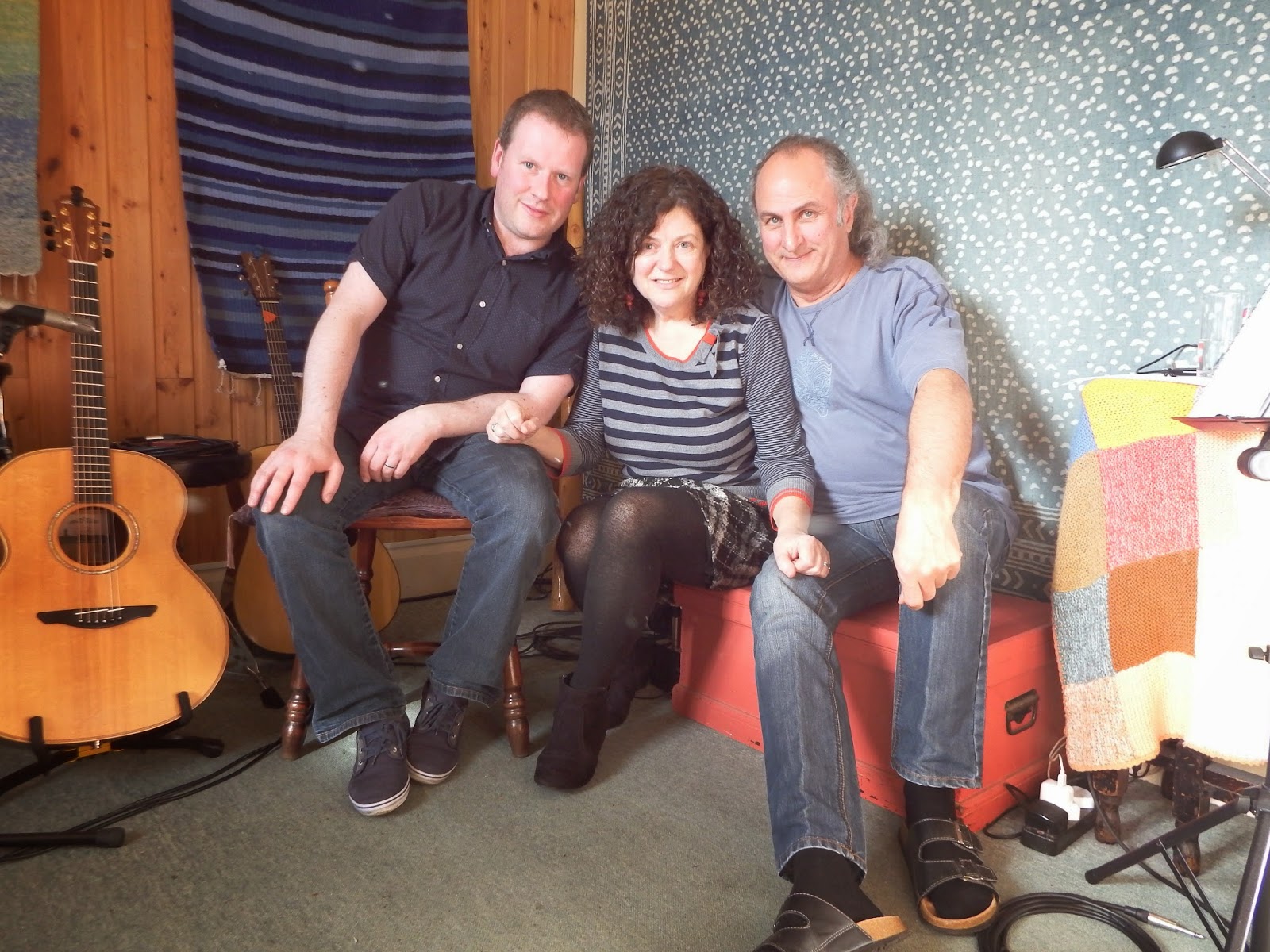 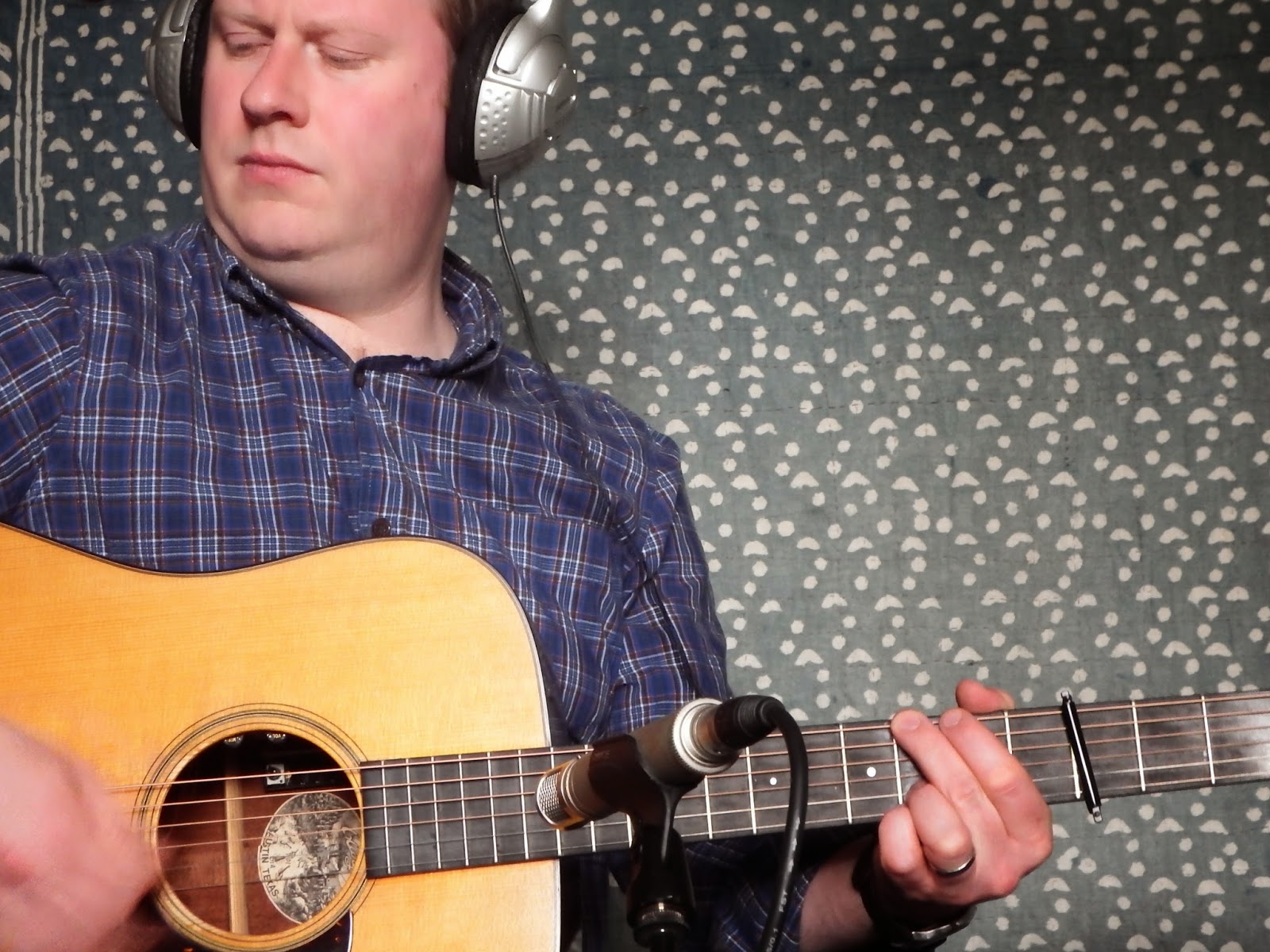 Once we'd finished up Tom and I went out for a short walk on the beach - there's heat in the sun and a chance to get the camera out.

Lots of rock pools today ... brought me back to being a child and nosying around - and the seagrasses are starting to flower. 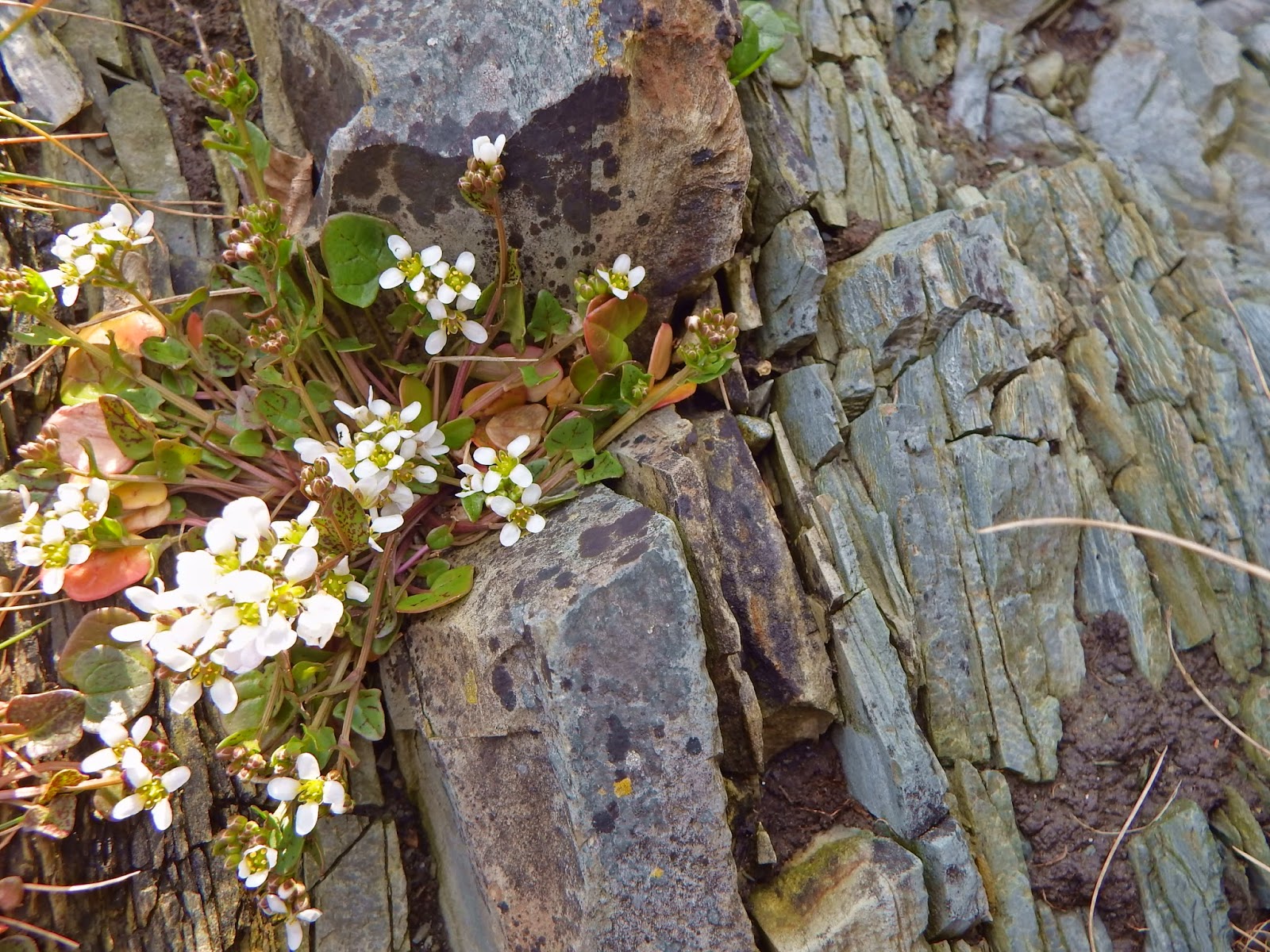 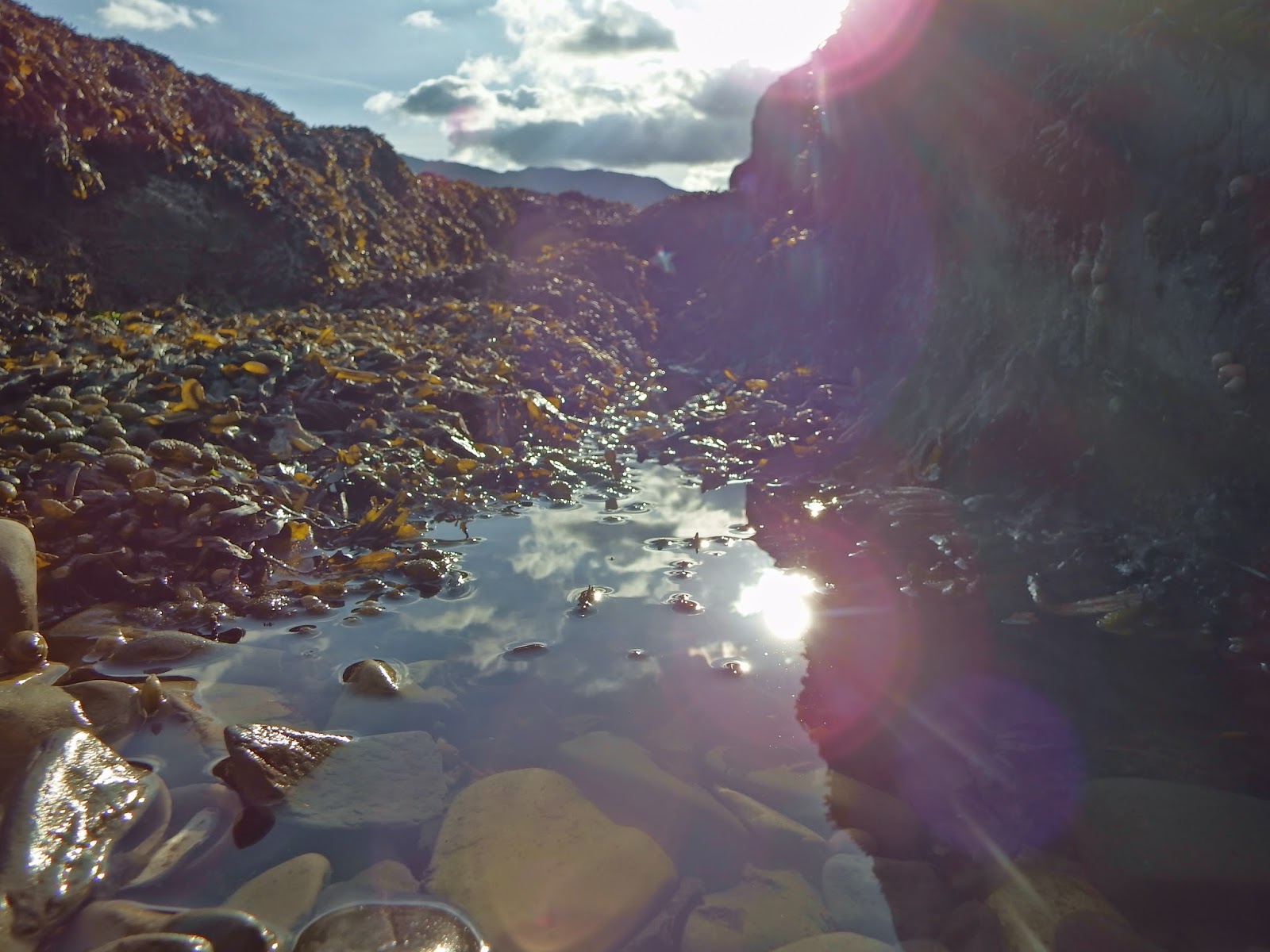 And a very low tide 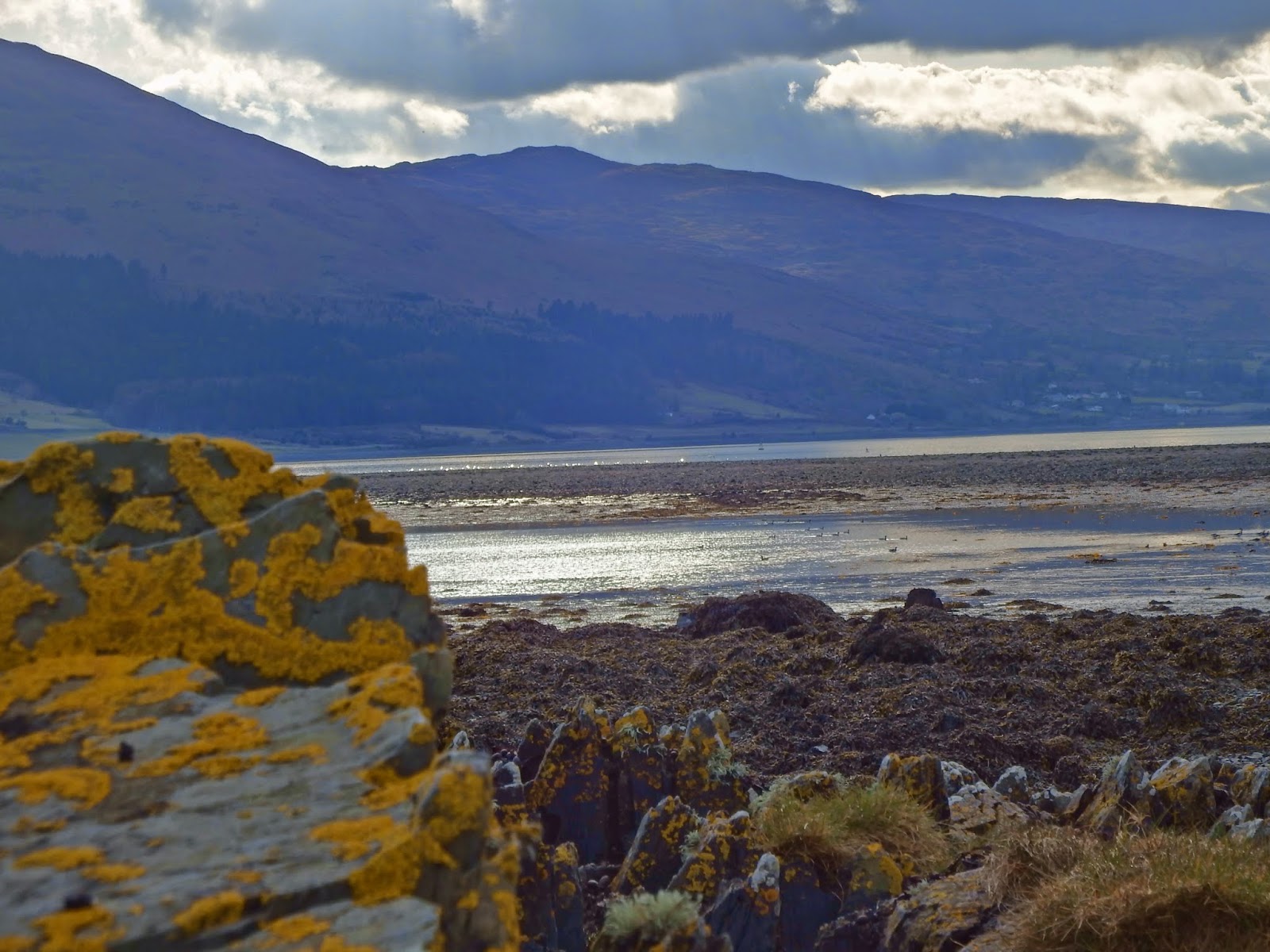 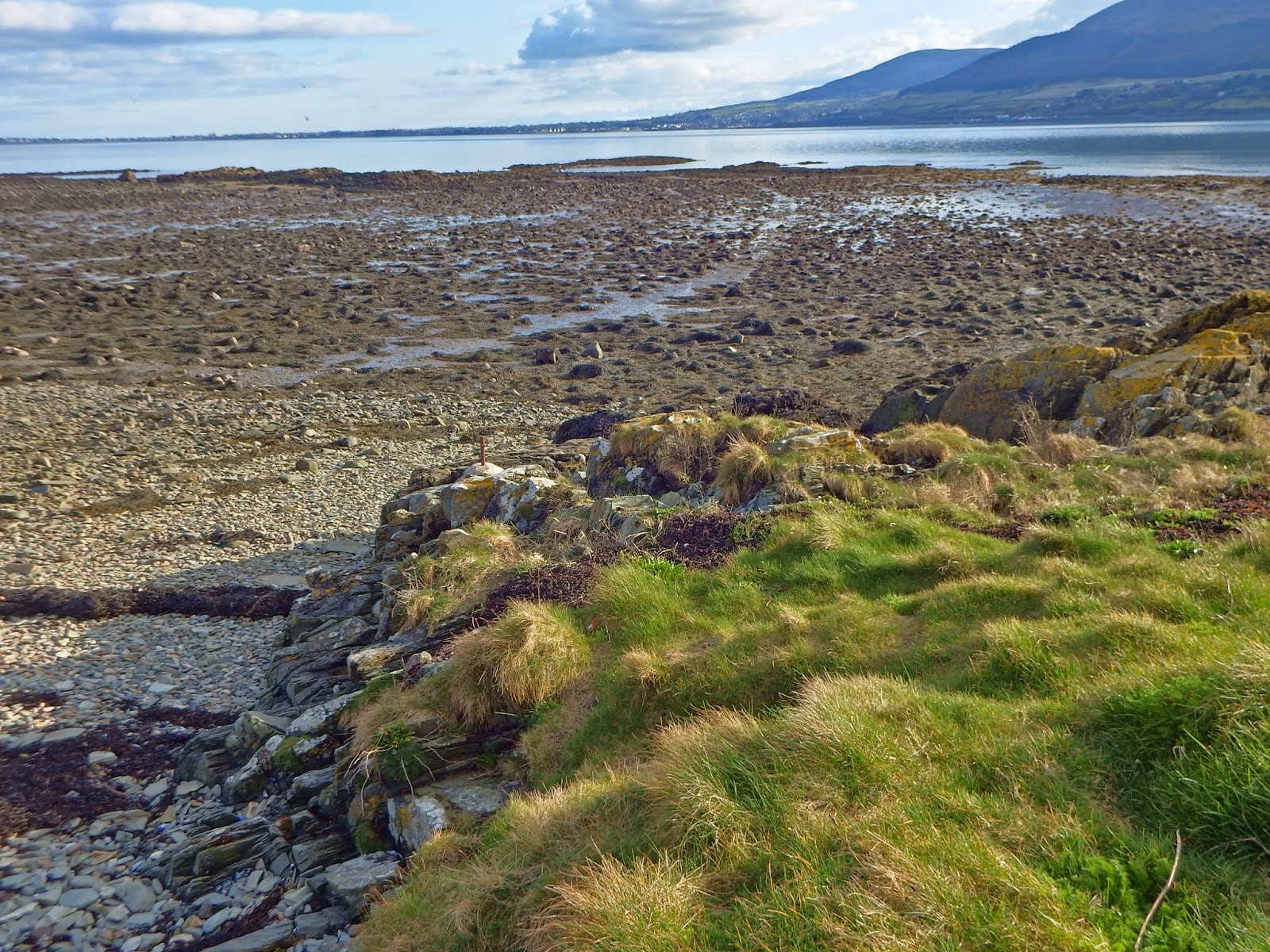 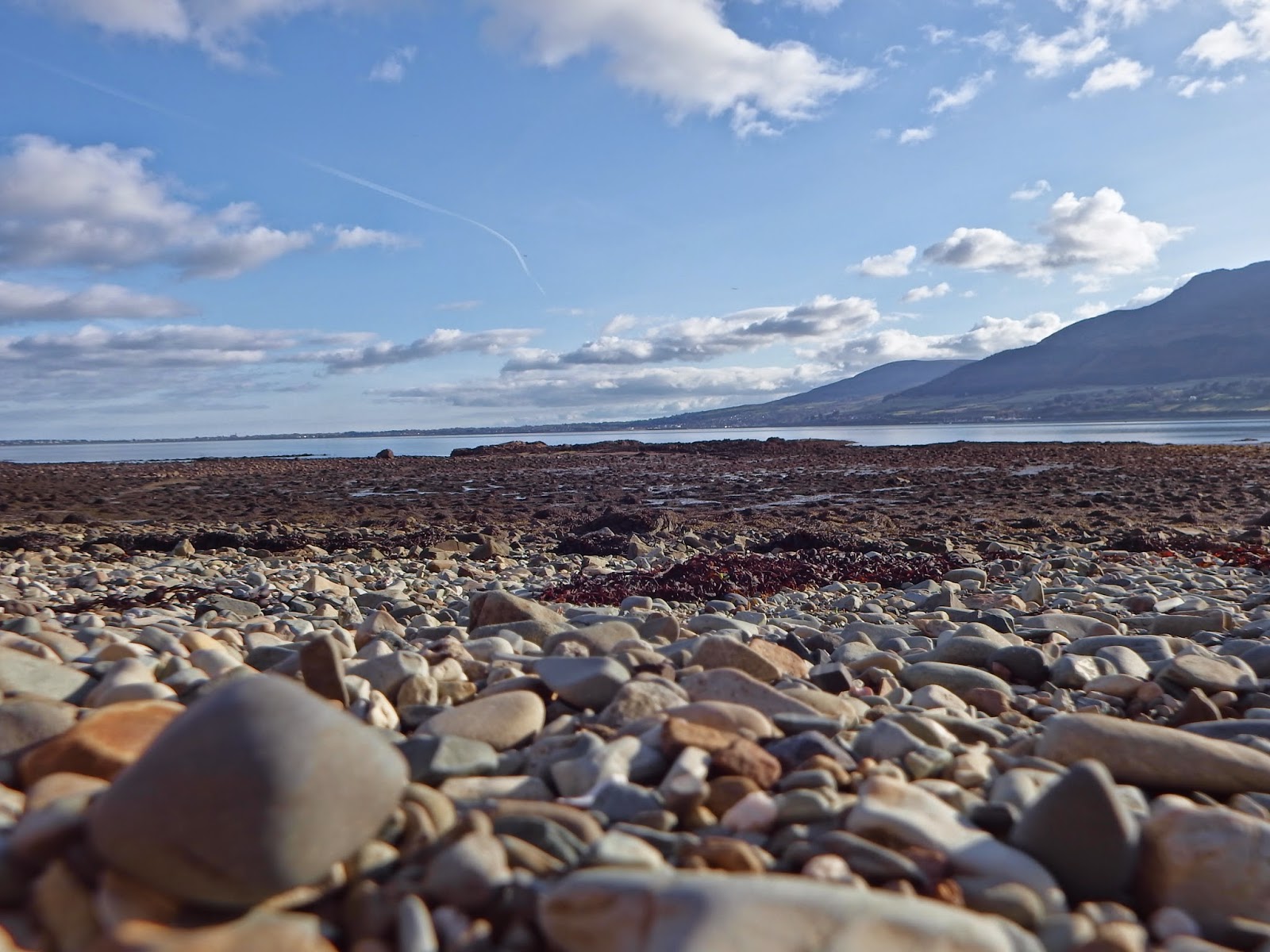 So before we pack up the car to head over West to visit my Mum for the long weekend I thought I'd take a minute and wish you all a Bright and Restful weekend.  Maybe the weather will be good enough for a picnic in the woods.