Community Choir back for another term.

Is it a choir?

Is it a singing circle?
Is it a class?

I'm never quite sure what to call it - but it's all of those things - a chance to come and exercise your vocal chords for a couple of hours once a week.

For sake of clarity we'll call it a Community Choir.

We sing a mixture of African rounds, Irish folk songs, old pop songs, new material.   Our only performances are around Christmas time, playing at the village pageant and at the Christmas craft fair and otherwise it is a safe place, I hope, for people who are unsure of their voices, but who want to sing.

We meet on Wednesday nights in An Cuan, Rostrevor, at 7.30pm with a break for tea/coffee half way through.

If you've ever thought you couldn't sing, but always wanted to, then give this a try - your only commitment is for 6 weeks - and it costs £30.  (Please help me out and put your money in an envelope with your name on it  - thanks, it'll speed things up).

Email ThisBlogThis!Share to TwitterShare to FacebookShare to Pinterest
Labels: choir

We're already back 4 days from our Busman's holiday - sad and sorry individual that I am, I need to have a few gigs to feel like I can relax properly - so a mixture of work and holiday was the order of the day.  We played 3 nights formally and another couple informally for groups of people which was just lovely and challenged my language skills.   I like to try and speak a little of the country's language that we're in - it's always good fun to even try a couple of words.  The start of our stay was in Bilbao in the Basque area of Spain ... Their language is called Euskerria .... and to say thank you is"Eskerrik Asko" !  I had to write it down otherwise nothing would have sunk in lol

We started our stay in Rennes, two hours south of the ferry and had a lovely, very expensive, Morrocan meal - lovely at the time anyway, but very heavy and told on us for a few days.

But Rennes is a lovely city and I'd like to visit it again.  Here are a few pics from our night time walk around. 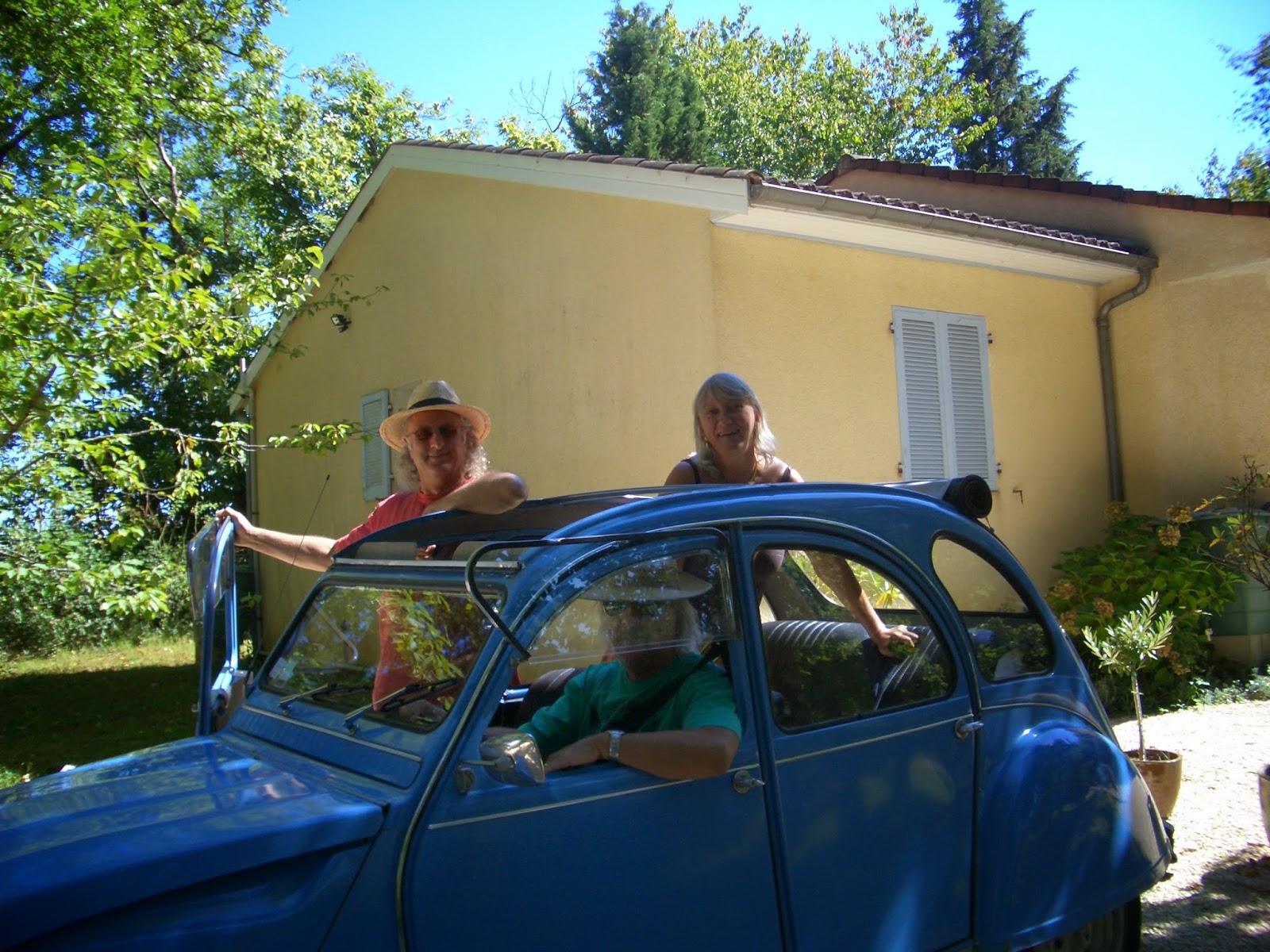 Further North, near Montmorillion, we almost missed the sunflowers.   I had been watching out for them for Tina Downey's tribute and last year they had been magnificent - but this year they were almost ready for harvest and were hanging there heads … So for the entire trip I was searching for one perfect field - and got it eventually … here on Tina's tribute page.

While in the North we went to visit Oradour sur Glane - the martyr village which Charles de Gaulle ordered be left as it was after it was destroyed by the Nazis - a chilling experience.  I've posted lots of pictures here

So we're home again and back to porridge.
Did you have a nice holiday this year?
Do you ever take a busman's holiday?
I'd love to hear your stories.
Posted by Fil at 20:19:00 2 comments: 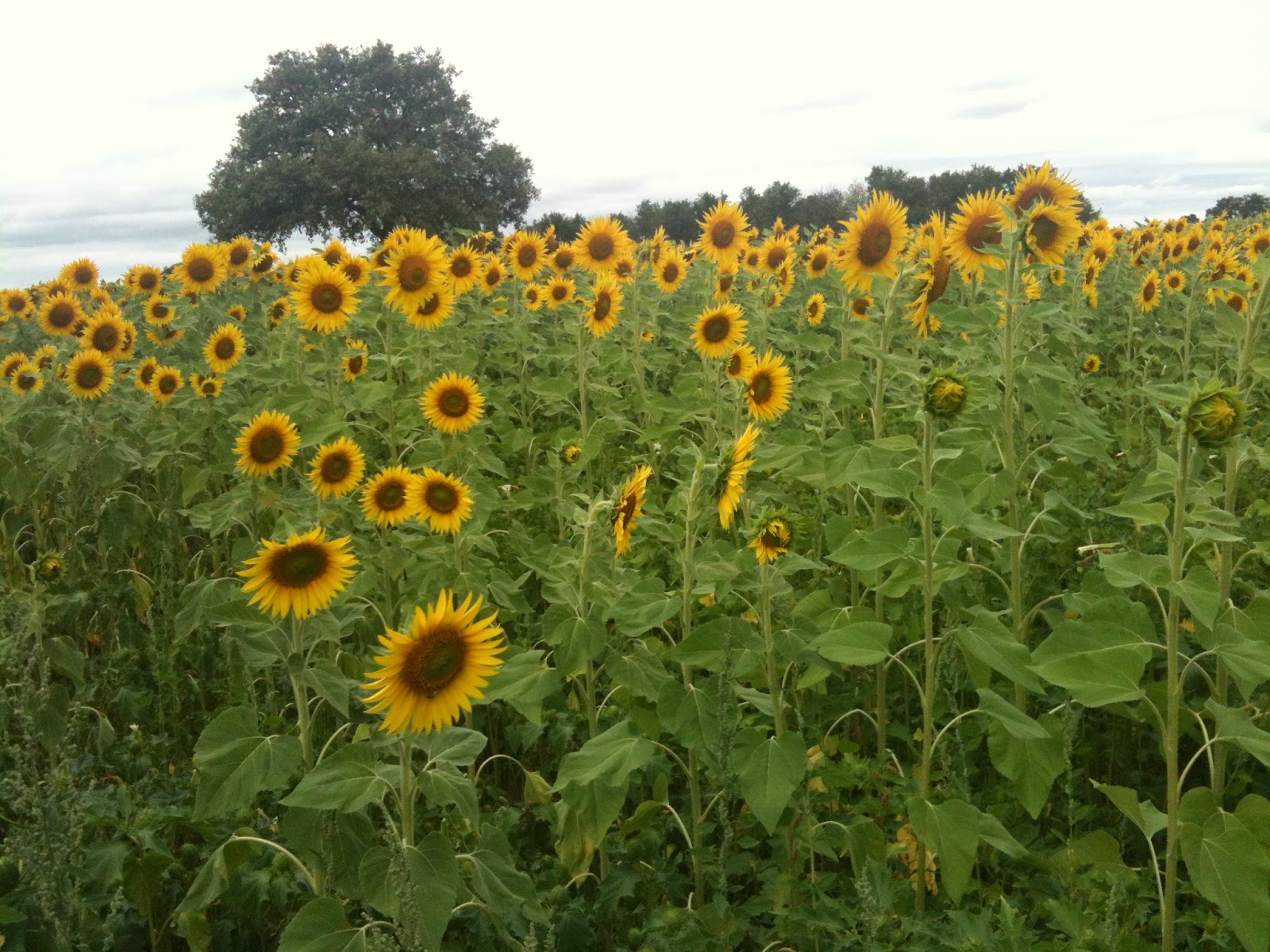 Today all over the web, people are posting sunflowers to remember a lovely woman called Tina Downey, who's blog "Life is Good" had lots of followers.   She passed away on 23rd August.   I only got to know her a little bit through and after the A to Z blog challenge in April and wanted to pay my respects.

Sunflowers were Tina's favourite flower.
These were growing near where we visited in France a few days ago.
May the sun be shining wherever you are Tina.

Today we visited a terrible place … a place that's been left to remind us.
I normally keep my posts very light, but I felt I needed to share this, and be warned, it is not light reading.

On the 10th June 1944, 200 SAS troops surrounded the small town of Oradour-sur-Glane which lies more or less on the line between the Vichy Ruled France and Free France.  They proceeded to kill everyone in the place and destroy every building in it.  642 people died. 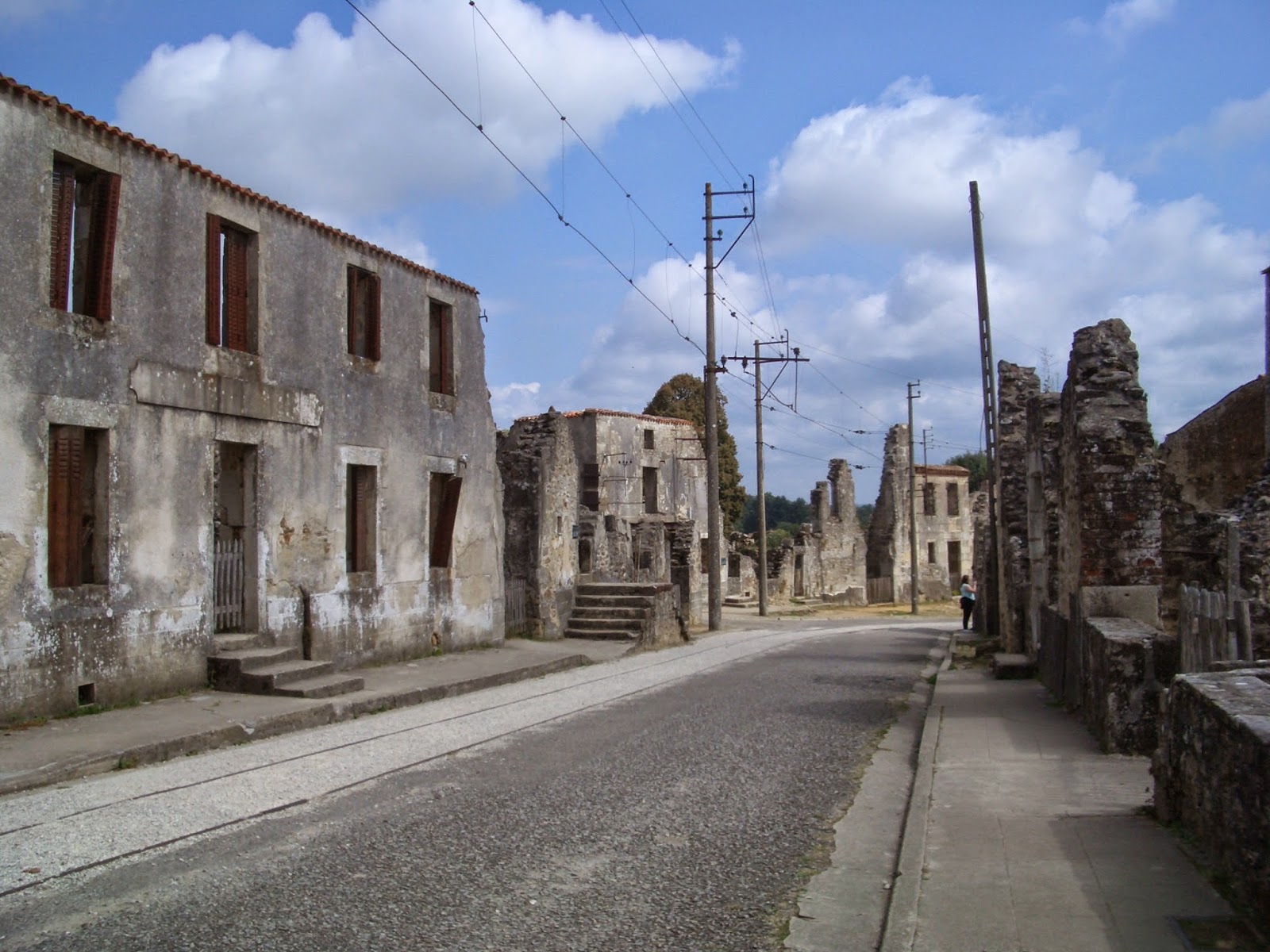 They ordered everyone into the village green, then separated the men, women and children - the latter were ordered to the church - 193 women and 206 children - and the men were divided up into groups ….The Nazis systematically set up machine guns and at one signal shot each of the groups of men and then burnt their coprses.


And once they were sure everyone was gone they went to the church and set fire to it and exploded the roof on top of them.
An atrocity beyond comprehension.

Charles de Gaulle ordered that the village  be left as it was.   As a reminder of what war can do.  We sanitise war on our news.   This was so real.

They have left the cars where they were, sewing machines, tables, bedsteads … anything metal survived and has been corroded by the elements in the the 70 years that have passed.  And much of the metal had been contorted by the heat of the fires. 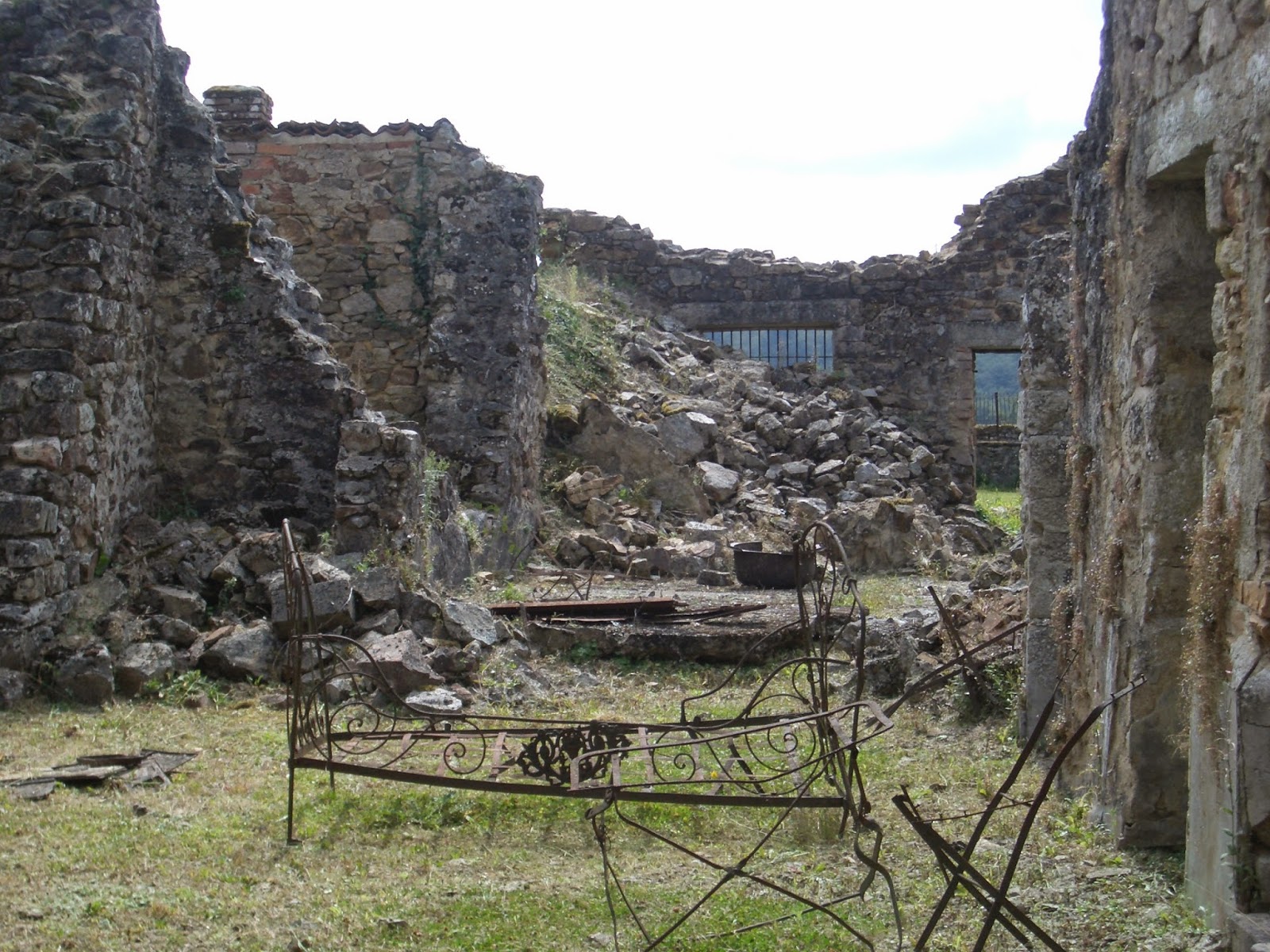 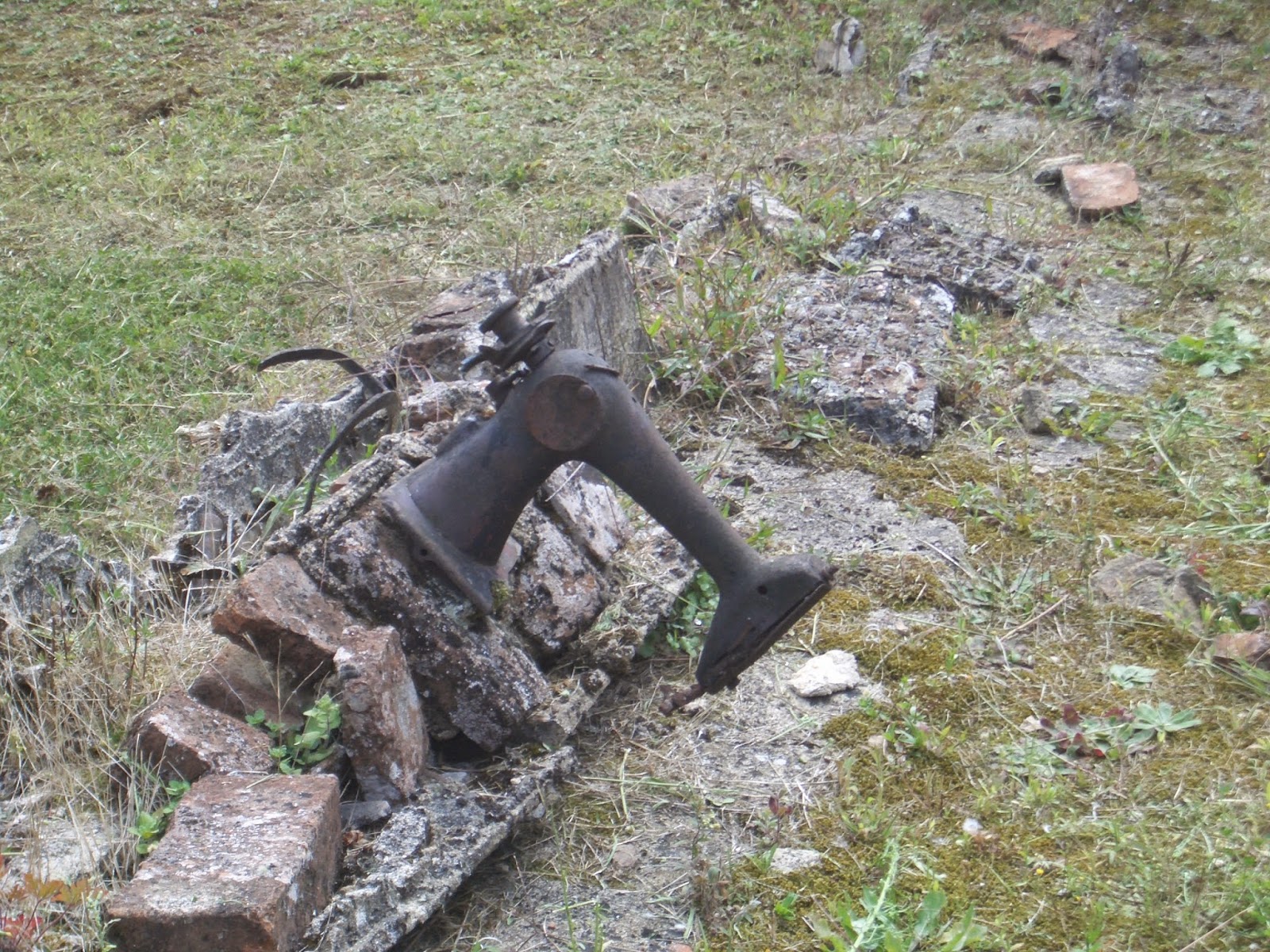 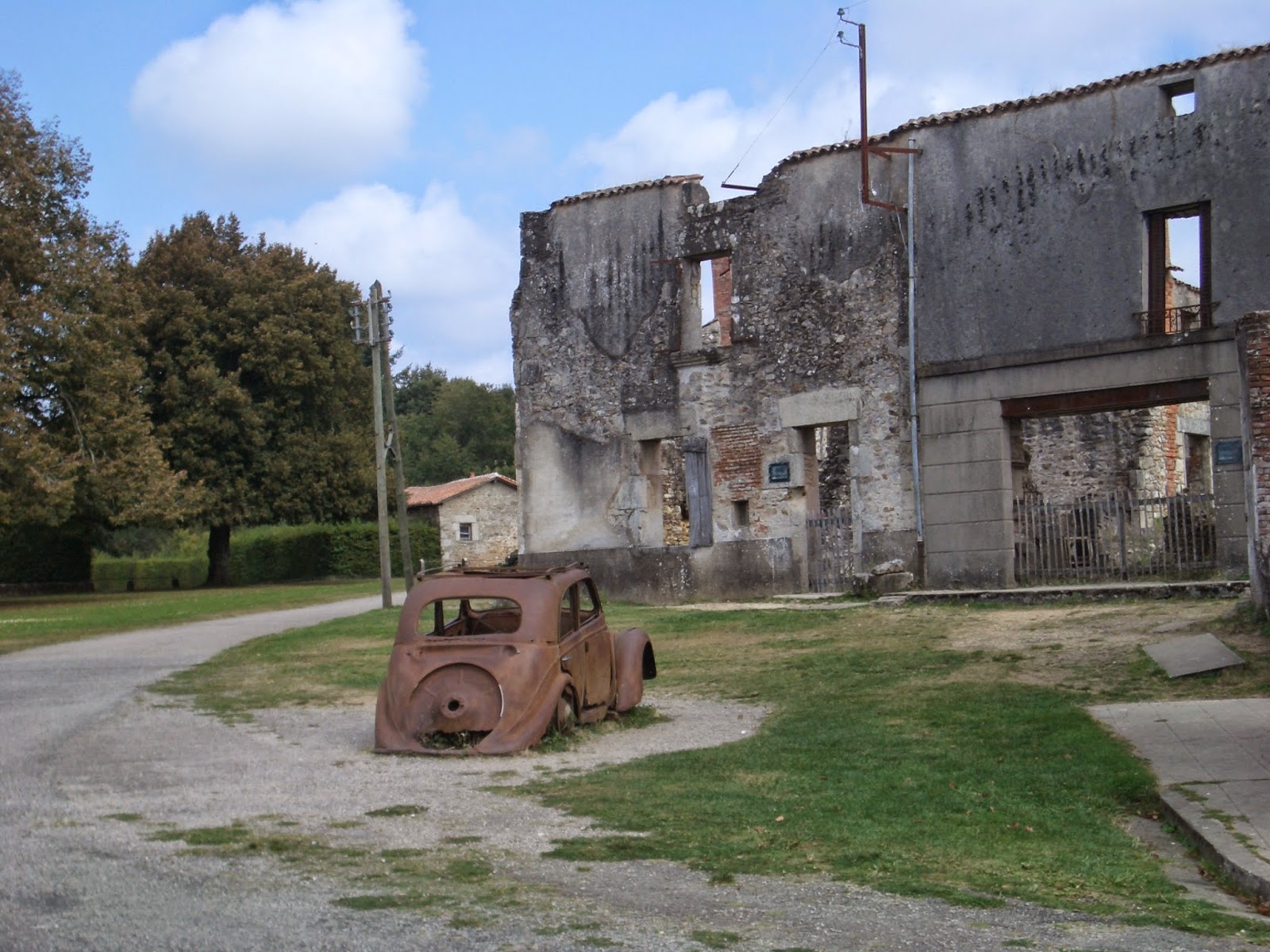 It was really shocking.

Some of you reading this may remember the war.   I don't.   But I remember our own war.  The emotion of feeling this massacre brought me back to the bad days of the euphemistically called "Troubles" in the North of Ireland.  Murder is murder in whatever shape it takes.

The soldiers that day, the troops that is, were all 18 years old and younger.   An officer held a pistol to their heads and ordered them to shoot - them or you.  And the worst part is - they got away with it.  Nothing to pay for it.

Apparently, the Restistance had captured some senior German officers - one was killed but one escaped… And when he got back behind German lines he told ….

But he named the wrong village. 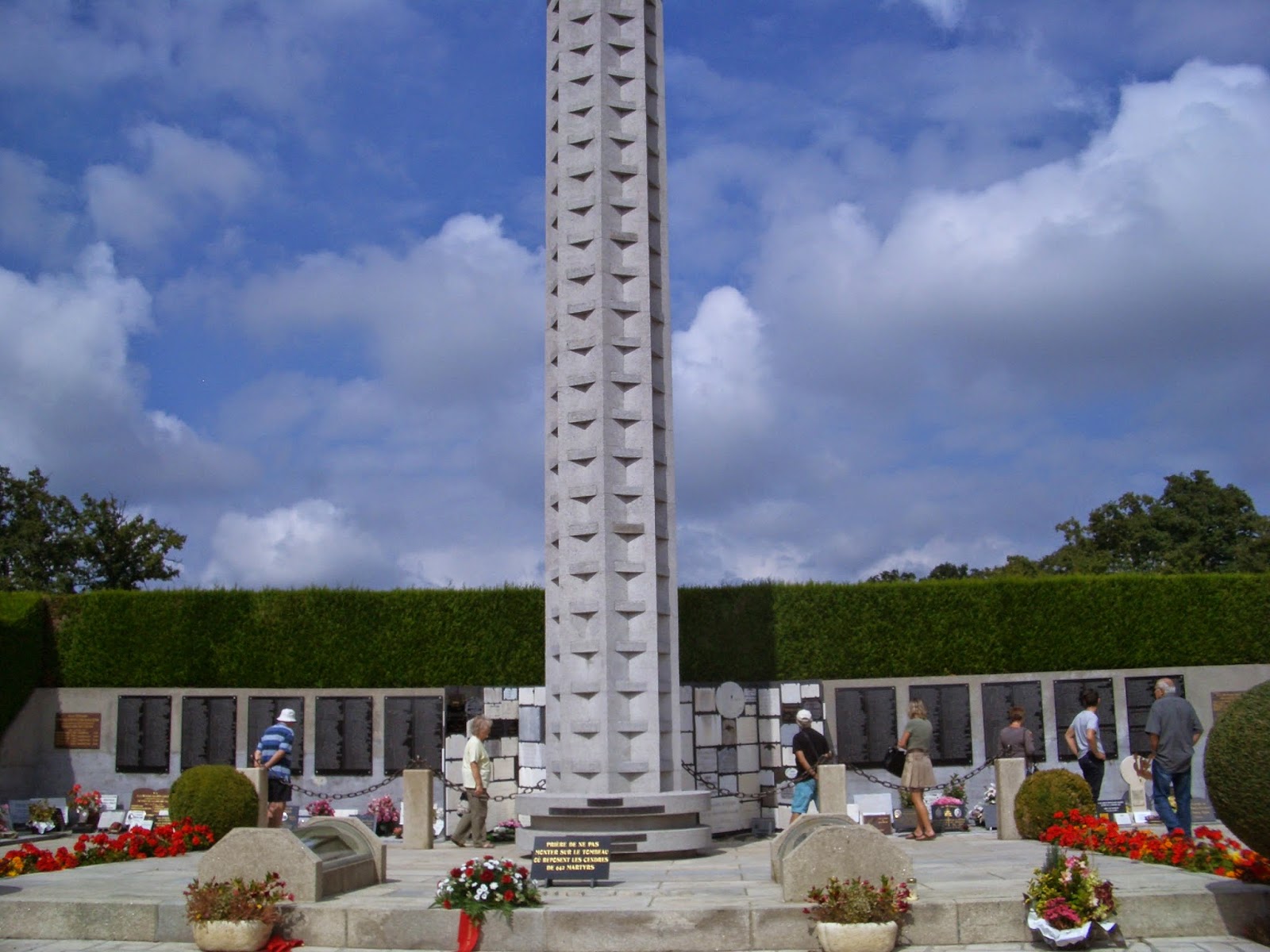 The whole cemetery is a memorial - it's still used, this cemetery.   All around the memorial are plaques from family members.   The people who were left behind must have been in a terrible way.   How could you get over that.

And the women in the church must have heard the rest of the machine gun fire and been in such terror. I found it hard to even offer up a prayer for them.  What could be said.

In the entrance to the memorial there are these posters with quotes from various people.

I despair of our world - we have learned nothing really.   but places like this will hopefully serve to teach.   Children should be brought there on history trips - war is not a glamourous thing - by any stretch of the imagination.
Posted by Fil at 18:30:00 4 comments:

Email ThisBlogThis!Share to TwitterShare to FacebookShare to Pinterest
Labels: places 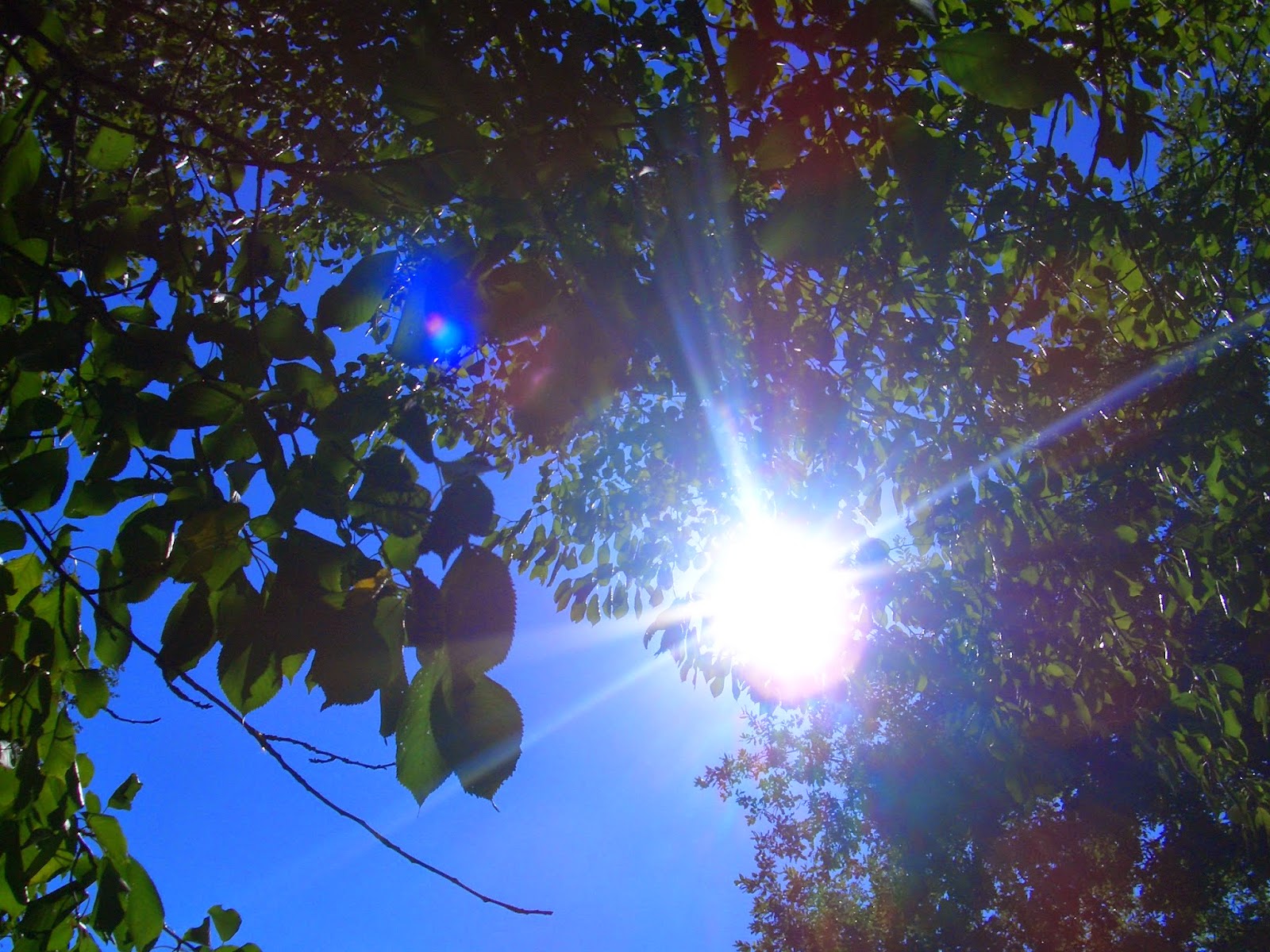 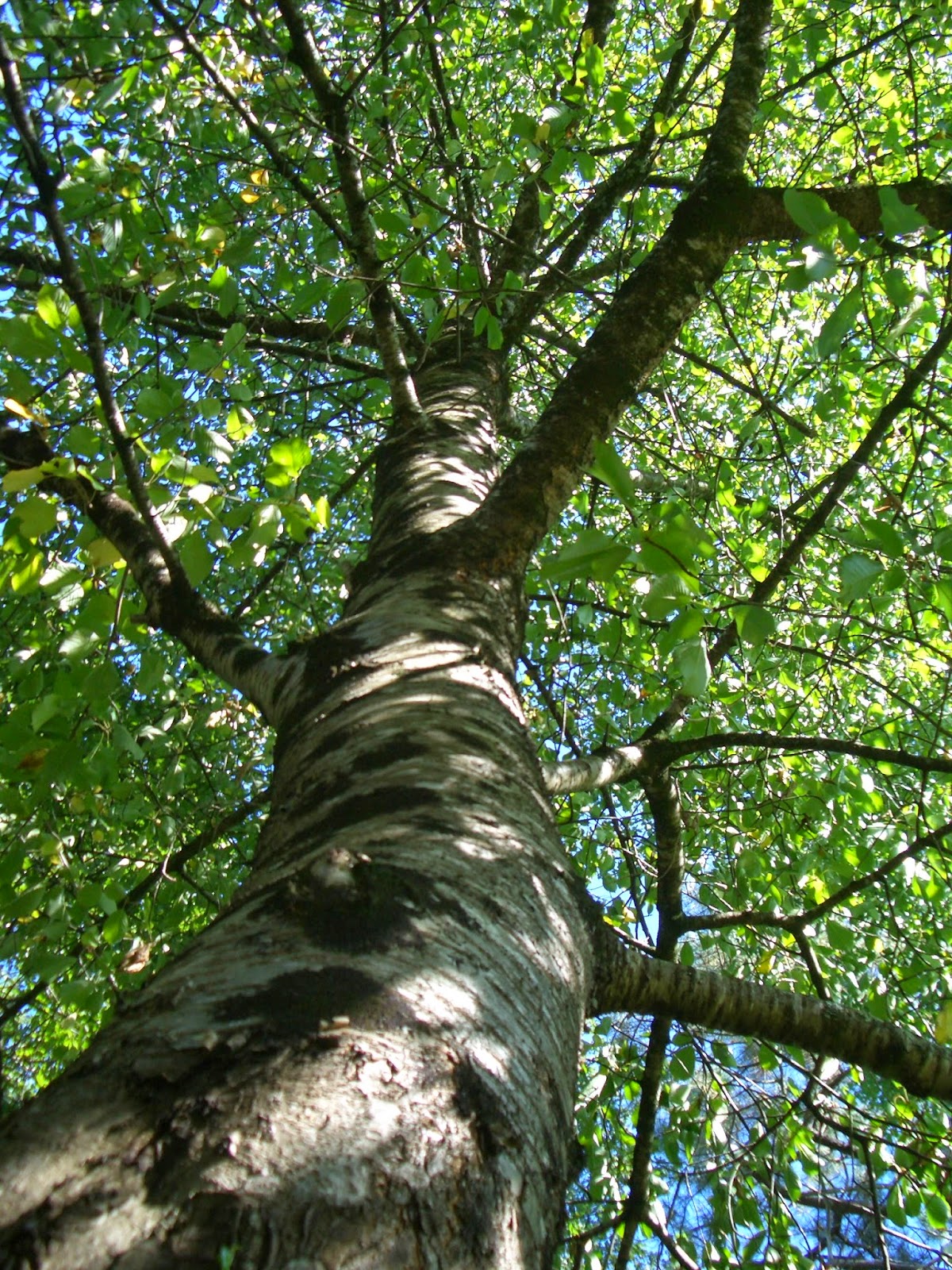 I remember a poem when we were at primary school - about a fawn standing in a dappled glade.  I'm not quite sure if the fawn was dappled or the light was dappled, but I've always loved the word. 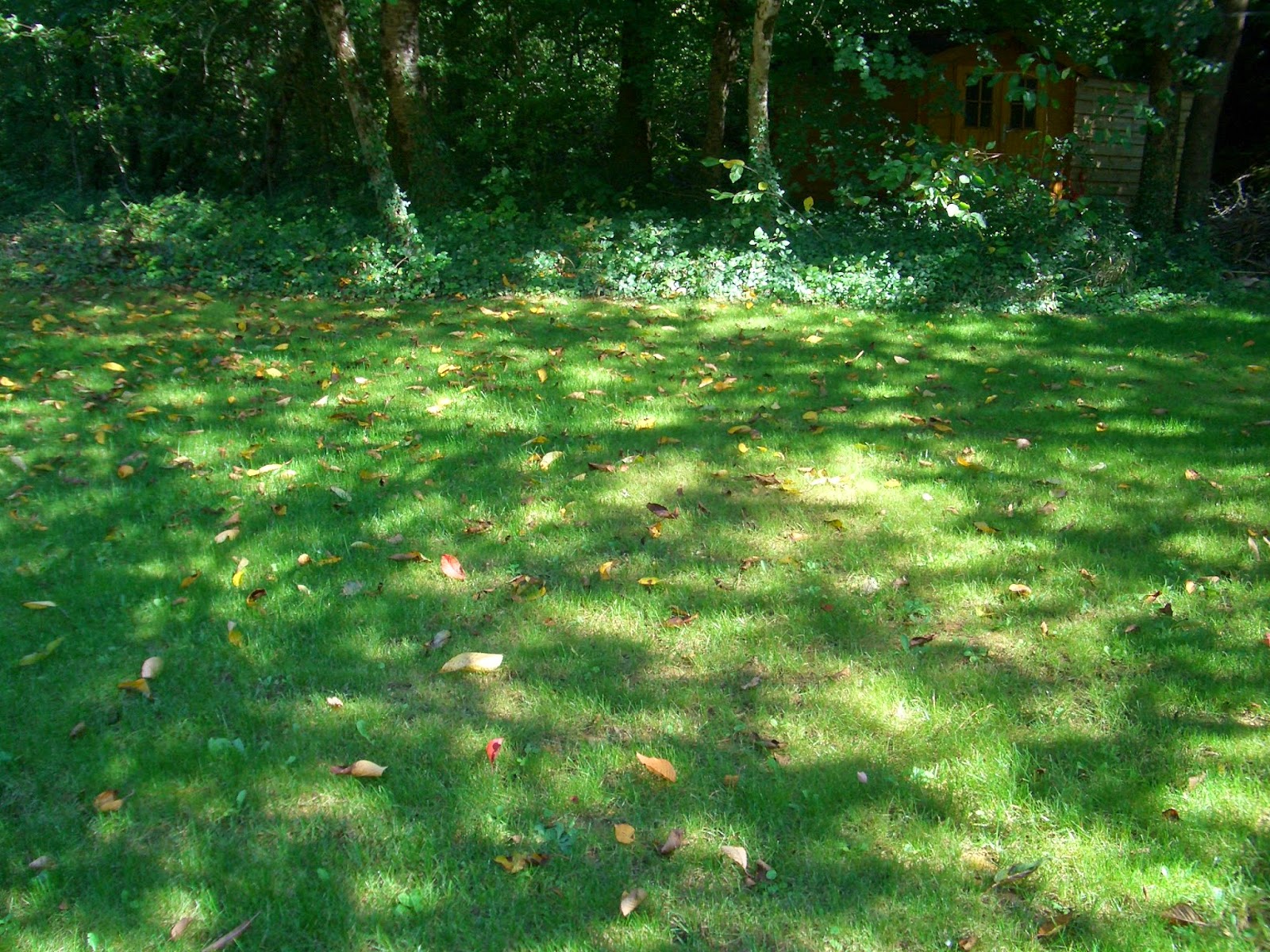 The shade has been dappled at our friends house this past few days … throwing gorgeous light and shade under and around the trees.  I hope the fawn has been coming out at night.

This sylvan scene was only spoiled by the flippin' flies torturing us - they'll be dappled too if I catch up with them!!!  :) 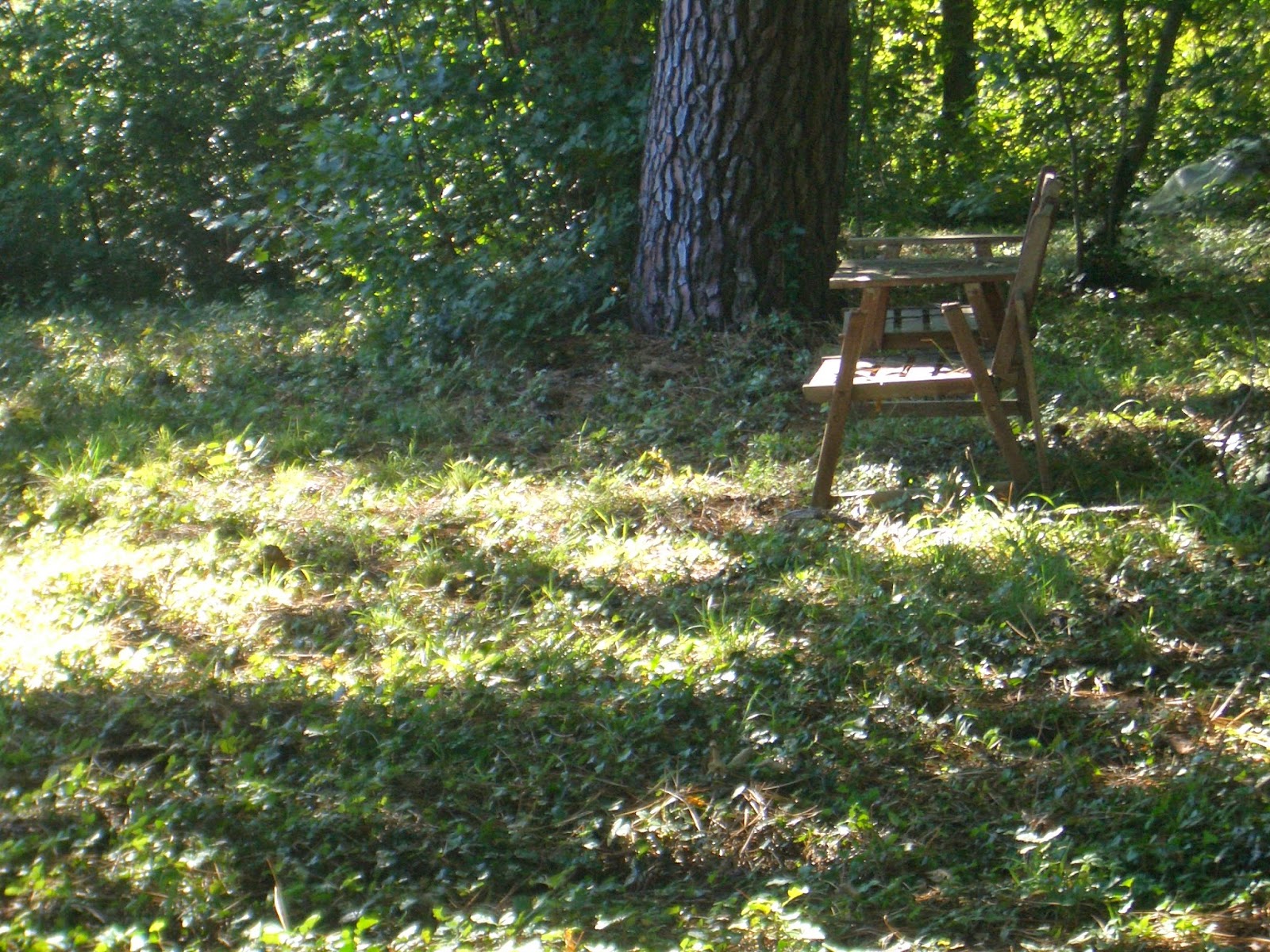 A huge thank you to everyone who came out to our gigs - on Friday night as guests at the Cahors Folk Club along with some brilliant performers from the area.   And then at Blanquefort, the Moulin, home of Geoff and Annie - and a fabulous meal of Moules Frites in between the music sets.

Do any of you remember that poem?  I'd love to find it again - the internet isn't proving satisfactory on this one.
Posted by Fil at 23:19:00 4 comments: