Looking back on June 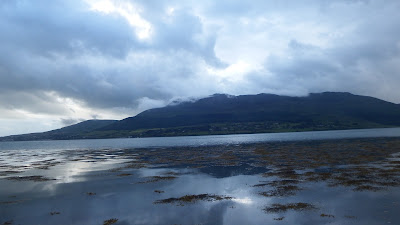 Rain clouds were gathering across the water in Europe on Tuesday evening when I finally got out for a walk along the shore to clear my head after all the shouting, anger and depression caused by the Referendum vote.

I can't have a look back on the month without mentioning it so you may bear with me and then I'll get on to happier thoughts :)

I voted Remain as did most people along the border here in Northern Ireland.   And I feel that the result will have a huge impact on us - not least of which is that we have the prospect of having the border back again.

Since 1992, we could sort of pretend that we were one island, a part of a larger group of islands, and with the benefit of all places - the UK, Europe and Ireland.  But now, with huge respect to my friends in England and Wales, and to my friends here who voted Leave, for the first time in my life I feel that we are simply an annexe of England.

My dread has been that we would see a re-emergence of the Troubles and most of the thugs who were involved back then don't need much excuse to find their jollies wherever they can.  I do hope the politicians see the necessity to get on with things quickly and not let the place descend into anarchy.  And I hope that our friends living here who hail from outside of the UK and Ireland stay safe.  Sad to say that, as in other parts of the UK, the barely contained sectarianism is showing its ugly face again, although there hasn't been such blatant racist attacks as on the Mainland.  But there's been enough to make me afraid.

If the shoe was on the other foot, and the Leave camp had lost,  I'd be most angry if they were calling  for a repeat of the vote, so although I'm disappointed,  what's done is done and we wait with baited breath to see what happens now. One thing's for sure - the news has never been more fascinating.

On the plus side, already the changes in the value of the Euro:Pound exchange rate has meant that the shops North of the Border are having a little boom but the many farmers who have farms straddling the border are worrying as to where their income will come from now that European money will be withdrawn.   Any goods or services we buy from across the border are now costing us a good bit more - we'd be across in the South at least a couple of times a week - we were in Dublin yesterday, in Donegal on Sunday - but the exchange has always been very mobile here and most of us carry two purses, so that will all adjust.   We're quick to learn where the petrol is cheaper!!

It's been great to have a bit of downtime after all our travels and we arrived back to a fabulous couple of weeks of sunshine.   We finally got our hedges trimmed back and the garden is starting to take shape.


Tom was involved in recording a CD for a local Church and at their launch last week I was thrilled to see these lovely modern stained glass windows.  The colour of stained glass always delights me but to see unusual use of it made it all the more beautiful. 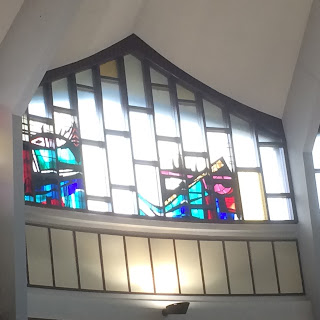 Now preparations begin for Fiddlers Green Festival at the end of July.   They have a new website up, so visitors can now buy tickets in advance.  We're playing on the Main Stage on Monday night with Luka Bloom, and then running the singaround on the final lunchtime.   I'm looking forward to all the visitors arriving over the next few weeks from places near and far and to sharing some drinks, tunes and songs with friends old and new.

But for now it's Wimbledon - and of course its raining :) Perfect weather for enjoying a couple of days on the sofa to watch Andy's progress.

Looking back on May 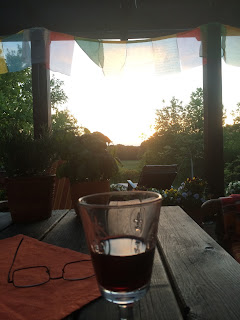 Now that I've started to thaw out after so much travelling this Spring, I'm enjoying looking back over our travels in Germany during May - we had a splendid time.

The first week at home after a long tour is like a whirlwind of emotions for me ... like, why on earth am I doing this?  I should have got a sensible job years ago and then I could retire like my friends are getting ready to do etc etc.   But after a week or so, when the garden has been suitably attacked and I've stopped missing my lovely cats who haven't been around for a few years now, then my mind instantly goes back to practice and planning.  So on Monday I was back at the desk getting a few bits into place for this time next year when we'll hopefully be travelling the Autobahns again (I do hope they have all the roadworks finished by then!)
So here's a few snaps ...

The Canada Geese were on Hallig Hooge when we were there - they're magnificent birds and protected by law which turns these islands into birdwatching holiday havens.  People come from all over to visit and to photograph them as they land mid journey.  If you don't know about Hallig Hooge, the lovely little not quite island off the coast of Germany,  read my blog here.
The Hallig is totally exposed to the North Sea and can be very windy - I've come to the conclusion after our trip to Australia, that I really really don't like the cold - I was meant to live in warmer climes.

Our ferry was changed from Cherbourg to Rosscoff - luckily we had allowed ourselves extra time to get there from our last stop in Luxembourg.   We ran into the start of the torrential rain that went on in France and Germany for nearly 10 days.  I have NEVER seen anything like the downpour in my life.  Sadly some people were hurt by lightning only a few miles away from where we were trying to battle our way through the storm.
It was lovely to catch up with old friends and make new ones along the road.  But I am very happy to be home for a while - hedges beware!!!