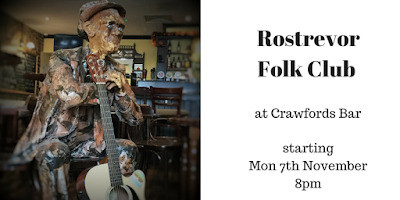 I'm delighted to be passing on the information that Rostrevor will have its very own folk club starting next Monday, 7th November - running initially fortnightly and then monthly in the new year.

Crawfords Bar is a beautiful intimate venue, perfect for acoustic concerts. To make the evenings even more special, numbers will be limited, there will be no sound system and the bar will be open before, in the break, and after the performances.   Get up close and personal with some of the finest touring artists on the folk scene.
The first artists are as follows:

"One hot fiddler!" - Cyndi Lauper; "Hauntingly emotional vocals"L.A. Times;  "Genius!" - Pete Seeger
Best known from The Klezmatics, LISA GUTKIN steps out on her own on "From Here On In," her first CD of six warm and wonderful songs featuring her vocals, fiddle, and tenor guitar. The Brooklyn native was a founding member of the downtown Celtic group Whirligig with Cillian Vallely (Lúnasa). Playing klezmer to Celtic, Appalachian to blues.
Tickets £10, available in advance or at the door from the Rostrevor Inn 028 417 39911.

"Describing Niamh Parsons' singing is like to trying to describe color to a blind person." -Jamie O'Brien Rambles.net
Niamh Parsons has come to be known as one of the most distinctive voices in Irish music.  Dubliner Graham Dunne is a well-known guitarist in the Irish Traditional music scene. He is known for his sensitivity of touch as an accompanist, and his fiery ability as a soloist.  Together "neither Niamh nor Graham wastes a single note or nuance in their matchless renditions of predominantly traditional songs" Dave Kidman
Tickets £10 - early booking advised.  Phone 028 417 39911 or call in to book tickets

A special pre Christmas folk club featuring the gorgeous traditional and classical sounds and songs of the Avalon quartet featuring the vocals and uilleann pipes of Brendan Monaghan.   Not to be missed.
Tickets in advance £10  from The Rostrevor Inn, Bridge Street, Rostrevor - phone 028 417 39911.

More details can be found on the Rostrevor Inn Facebook and www.therostrevorinn.com.

I'm so excited to see the quality of acts that are scheduled - in the new year you can look forward to Brian Willoughby, ex guitarist with the Strawbs with his wife Cathryn Craig and also to one of Ireland's top songwriters, Mick Hanly and many more to be announced shortly.

See you there.
Fil

Email ThisBlogThis!Share to TwitterShare to FacebookShare to Pinterest
Labels: around here, rostrevor