It's been a busy couple of weeks around these parts - my friend Belinda opened her second Good Craic gift shop on very short notice a few weeks ago, and both Tom and I have been helping her until her staffing settles down.   Such a leap going from a sole trader to having several staff to manage.   She's doing brilliantly, the shop is a joy to be in and the location of the new place, at the Silent Valley Reservoir, has been simply lovely to go to during this fabulous spell of weather.

Silent Valley is one of three reservoirs in the Mourne Mountains that feed the greater Belfast area and with people staycationing this year lots of people from all over NI and the South of Ireland have been discovering this beautiful part of the world.

Its name is said to come from the notion that the birds all disappeared after the explosions to flood the valley.  Before that it was known as Happy Valley because of the singing of the Cornish quarrymen who worked on it.  The greatest achievement was the tunnel that was dug by hand by two teams from both sides of the mountain, guided by candles to keep straight lines and arriving just inches out when the two teams met.

In the middle of all that excitement my Mum celebrated her 94th birthday out in her garden picking fruit.   We had a gorgeous two days with her - she's still living on her own and managing well. 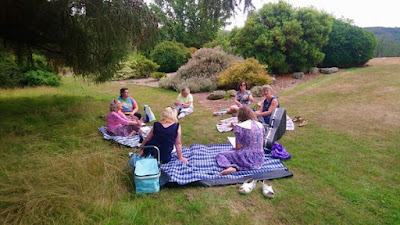 And a few members of my Singmarra singing group got together in the park yesterday for the first time since last March.  It was so lovely to hear voices in real life and share a few songs and chat with each other.  We could hear thunder across the hills and there were reports of flooding a few miles away, but our singing must have kept the rain away:) Now it's just about time to figure out if and when we can actually sing together in a group indoors and plan things for the Autumn - the government guidelines are so unclear to read and our regulations are different here than in England and different again from the South, so it's all very confusing.
* * * * * * * * * *

I am so far behind with my round the world book journey and reviews that it'll take me ages to catch up.   However, I just had to write about Days Without End and its sequel A Thousand Moons written by Sebastien Barry.

"Even when you come out of bloodshed and disaster in the end you have got to learn to live."
These stories are set in the run up to and during the American Civil War - a soldier called Thomas McNulty is the narrator in the first one, and Winona, the Indian girl he rescues is the narrator of the second.   And I can honestly say I've never come across such exquisite writing.   I could almost feel the scratchiness of his uniform and smell the dirt and experience his guilt and disgust at what he was being asked to do.  And Winona walking through nature celebrates such detail of the ordinary.   I normally race through books, following the story, but in Days Without End you have to wait and hear Thomas speaking - his colloquialisms, his pace of speech, his observations - he says once that the sky looked like someone had drawn it with a paint brush and that's what the language is like - a slow, luxurious painting.   For sure, the wider subject matter is not jolly, but rather than a grand depiction of the epic proportions of war, it's about living - the feelings and thoughts of one man, or girl.
100% a 5* from me. 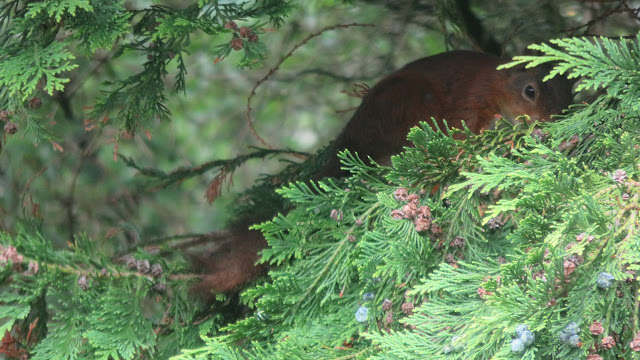 A new mural has appeared in Rostrevor - lovely work - on the wall of one of our restaurants which  is unfortunately closed again due to a bad Covid outbreak in the area - but that will hopefully pass soon. 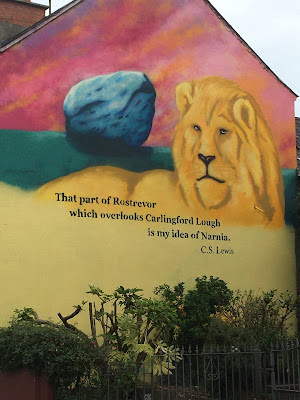 We've had the most exquisite sunsets 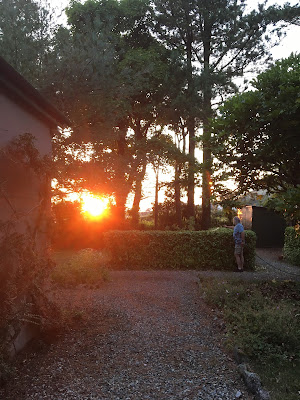 and I've been enjoying playing with paints and plants 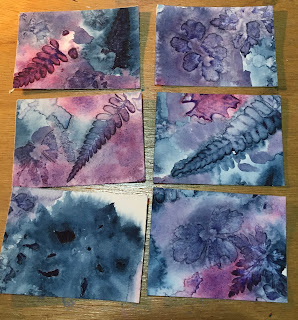 I've been popping in to keep up to date with how you all are but regular blogging is still not top of my list at the minute - this slower pace is great and I have to say I'm getting a lot more done than before, but there are a few things still needing to get back onto the regular list.
I hope you are well and staying safe.
Posted by Fil at 12:51:00 2 comments:

Good news - a date for the diary and other updates

After deleting several blogs I sort of followed at one time, the spam problem went away and Hurrah I can see your blogs again.  Just in case, I've changed my password and am slowly working my way through all my password protected things - how did we end up with so many passwords! 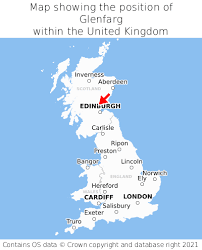 For the first time in 15 months I received an email during the week asking if we can still do our concert in October!   In Glenfarg Folk Club in Fife.  Woooohhhooooooo - I was expecting yet another, "sorry, but we're going to postpone again".

All of a sudden there's a bit of focus and I'm beyond delighted.
We've no indications yet of how group singing will work indoors, so planning for choirs is still up in the air - very frustrating for someone who is used to planning well ahead - so I'm contenting myself for another month or so to leave that side of things alone.   This not working lark is very contagious - I could do it forever lol.

In one of my very rare cleaning spurts I came across some old envelopes. 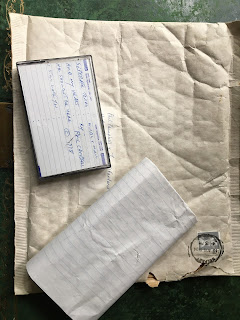 This was how we used to copyright our new songs.   Put them on cassette, write out the lyrics, then post it to yourself and don't open it - the postmark confirmed the date. 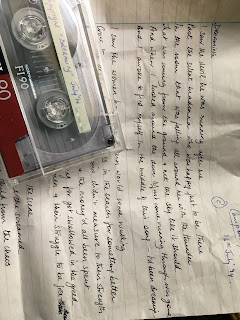 This one is Dreaming, one of the first songs I wrote - during one of our first trips to Germany when we were based for 6 weeks out in a tiny village in the country with limited German language knowledge and  "You eat someone" and "What you think about a whiskey!" the limits of our host's English.   I got very homesick, thankfully the only time that has happened to me and this song came out in actual dreams.  We still sing the song in our set - probably the only one we do that reflects the idiocy of life here in NI and I was surprised to find an extra verse in it that I'd forgotten about.   not sure why it wasn't included at the time but maybe I'll relearn it now.

With life being a bit lopsided it's lovely to be moving in to summer mode - the garden AND sport on the tele.   Brilliant.   We're good armchair sports coaches in this house!  Andy coped well at Wimbledon, Lewis is struggling a bit in the Grand Prix and I'm looking forward to seeing the Women's Formula One, Rory needs a good talking to in the golf and who knows what we have to look forward to once the Olympics start.  Of course there's always cricket if we get really fed up -  that's still a mystery to me much to the frustration of my Australian friends.  Football is the only no-no.

I hope you're all well and enjoying little bits of freedom - the joy of having coffee or lunch with friends is fabulous - things still aren't open in the south yet so we can't take my mum out much but that'll come soon, fingers crossed.