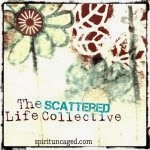 Cynthia Lee has a weekly practice called The Scattered Life Collective where she does a summary of her week - I've been following her for months now and have finally got a Friday free to join in ... This may not be a weekly affair, but if you don't start somewhere you'll never start at all.

It has been a wonderfully playful week and the first week since the clocks went back so it has felt like we're straight into Winter.
So using Cynthia's format for now here's what has been happening in my week.

On the menu:  Spaghetti Bolognese - an old favourite - and quick and easy after a week away - with enough left over to freeze a dinner for late next week cos I'm planning a week off to concentrate on writing...

Out the window:  It's dark now ... I hate this first week of the time change ... dark so early ... I can just about see the shadow of the branches over the hedge and can see the kitchen reflected in my window.

Reading:   Well, just finished actually, in the car on the way home, The Misremembered Man by Christina McKenna and I loved it ...  There's going to be a stage play of it later in the month and last week I was asked to sing a part for the soundtrack which was great fun and introduced me to this lovely author.

Watching:  Catching up later on last week's episodes of Downton Abbey and the Paradise and hopefully catching a movie over the weekend... there's loads of new releases out .... Philomena, my namesake, with Judy Dench and it was partially filmed here in Rostrevor - a must see - and a couple of sci fi releases as well ... hmmm, decisions, decisions ... I think Judy will win out.

Icky things and their silver linings:

And in other news:

It's Samhain ... the Celtic New Year.  Here's a lovely story about the significance of apples at this time of year.
Samhain Apples

A retake on Tubular Bells - locally based musician and producer Tom Newman who produced the wonderful Tubular Bells has released a new recording made by the children of Northern Ireland ... here's a bit about it and a link to hear the single..