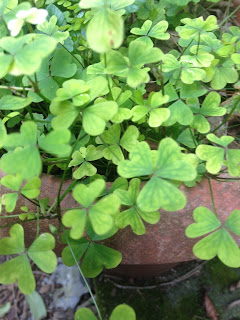 The Winter's nearly over when St Patrick's Day comes around - there's blossom on the trees and the whin bushes are in their full glorious yellow.  Today it's not sure whether it's Winter or Spring, but warmer days are on the way for sure.

I'm only just recovering from the pneumonia that flattened me although I have been getting out a little bit each day for the past week.  Normally I'm a terrible patient and will not stay in bed, but this time I was very willing..  On the bright side, it's been a great way of getting through the winter - it feels like it's flown by!!  Hibernation has a lot going for it lol.

And now something a little different for St Patrick's Day
Meet the Gaelic singing Muslim cleric
I'd like to introduce you to Sheikh Muhammed al Hussaini who is an imam and a singer of traditional Irish songs.
He is a fellow in Islamic Studies at the Westminster Institute in London, from where he has frequently criticised the actions of Islamic extremists, and at some personal cost.
Muhammad Al-Hussaini fell in love with Irish music a few years ago and has been singing ever since. He is an Irish speaker and sings in the sean nos style and also plays fiddle and whistle.

Here is a clip of him singing on Channel 4 news last St Patrick's Day.  Once upon a long ago when I lived in Dubai, I felt there were a lot of similarities between the Arab and Irish languages - Muhammed's voice is a natural in singing in Gaelic (sean-nos literally means 'old bones' and is a very traditional, highly ornamented style of Irish singing).


Muhammed is part of an international peace think tank based in England and recently he spoke in court in defence of a fundamentalist Christian preacher, Pastor McConnell, from Belfast who preached from the pulpit on the evils of Islam.  In Muhammed's view and that of most other lay and religious people, the man should be allowed to say what he wants, even if we disagree with him and this imam was prepared to speak on behalf of the man who had demonised his own religion.  To him and to other peace activists, freedom of speech is the most important thing.

The Music of Healing - A higher form of disagreement


We're Catholics and we're Protestants
We're Muslims and we're Jews
And we're some who are none of the above.
But we've gathered here together in Rostrevor by the sea
By decree of humanity and love.
- Tommy Sands

In the past week, alongside my good friend Tommy Sands, both Muhammed and Pastor McConnell spoke at a Music of Healing event here in the village and the following day joined with thinkers, victims of the Troubles, and heads of various religious congregations in Ireland - Protestant, Catholic, Jewish, Sunni and Shiite Muslims, to come up with a declaration for a higher form of disagreement.  Representatives of local monasteries and the integrated school were also present as were members of the non religious section of our community.  I'm so sorry to have missed the public concert, but the village has been  buzzing with discussion about all that was said.

If you are interested in hearing more about the Music of Healing listen here to Tommy being interviewed on BBC Radio Ulster about the event.  This is an annual event - a mixture of debate and music - which Tommy has been hosting since before the Good Friday Agreement 19 years ago, giving a space to (mainly) politicians from opposing sides of our divided community a platform to speak in peace and to have a higher form of disagreement.

By the way, the song "The Music of Healing" (trying to find a recording of it to share with you but my system is not having any of it - but you can check it out on iTunes or Spotify if you have either)it was co-written and co-performed by Pete Seeger and Tommy Sands.

So Happy St Patrick's Day to you and yours and may peace and tolerance be the main focus of all our lives in the coming months and years.

And a big shout out to all my lovely women friends around the world.  This day of solidarity has had so much significance over the years but is only starting to grow in my awareness
in recent times.  I've been off classes for ages now, so I've made a special effort to start back tonight and have some special songs to sing for the day that is in it.

This is Bread and Roses - It originated from a speech given by Rose Schneiderman; a line in that speech ("The worker must have bread, but she must have roses, too.") inspired the title of the poem Bread and Roses by James Oppenheim.

Isn't that a timely reminder in these days of plenty for many of us and of more equality for more of us, that we need to look after our spirit as well as our bodily needs.

This clip is taken from the film Pride about the Miner's Strikes - a terrible terrible time in England.  Although this song originated in a women's cause, it has become one of the most poignant protest songs anywhere in the world and has been sung in many languages.


Best wishes to you all.

Email ThisBlogThis!Share to TwitterShare to FacebookShare to Pinterest
Labels: Bread and Roses

Yarn Along: Reading and Making

Reading and knitting - two of my favourite pastimes.

I used to think I was a good knitter.   Well, I am ... a good knitter - I've always got something on the needles, usually more than one thing.   But I've recently discovered that I know very very very little about the subject.  One of the plus points of being laid up in bed for an extended length of time is that I've had loads of time to look around short reads - i.e. blogs - and I've found so many great knitting blogs and it has really recharged my interest and enthusiasm.

So I'm joining in the Yarn Along today, run by Ginny at Sweet Things for the first time.  The point of this blog hop is to share what you're knitting and what you're reading.   Some of these other knitters are quite amazing and there are some good ideas for reading as well. 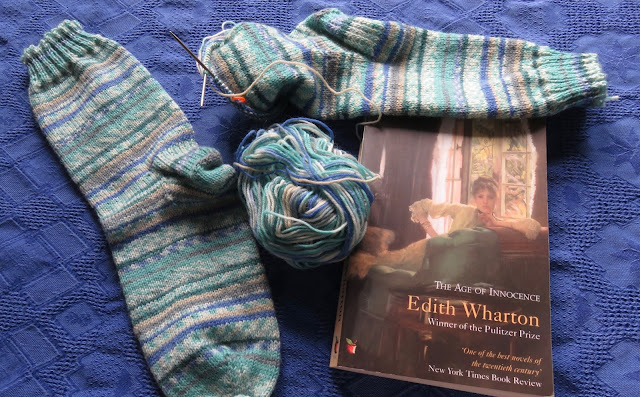 So this is my first attempt at knitting socks - it's been slow going over the past few weeks,  but thanks to the brilliant instructions of Winwick Mum and her Sockalong, I've finally nearly got my first pair of hand knit socks.  Woohoo..  I love the wool too - Regia sock yarn self striping wool.  I was shamed into this by the lovely Amy at Love Made My Home who, although she is a fabulous crocheter,  started knitting by knitting socks!  You what?!  So, finally caught up.

Reading, I've finally slogged my way to the end of Edith Wharton's "Age of Innocence".   She was the first woman to win the Pulitzer Prize for literature with this novel in the 1920s.  I'm sure at the time it was scandalous and a great look behind the scenes of the New York elite, and the descriptions are superb and suitable claustrophobic and paranoid, but I found it hard going and frankly boring.  However against my usual rule of if it doesn't hold my attention leave it there, I ploughed through to the end and I'm glad I did, sort of - there's a different rule for classics isn't there?  Although I confess that I diverted for a day in the middle to read the first Dr Siri Mystery which was brilliant - more about him at a future date.