Does anyone have the problem of having a song running around their head all night as they sleep?   Or perhaps it's a piece of art that you're working on ... or a problem you've been trying to fix.

I'm looking for a sure fire way of stopping this happening ... after I've had a gig or a class or a choir practice, one piece or a phrase will stay stuck and refuse to shift and I wake up like a wet rag ....

I'd really appreciate your feedback.
Posted by Fil at 16:31:00 No comments:

A little something for your listening pleasure today :)

It's a wet start to October here although it's still quite warm outside. 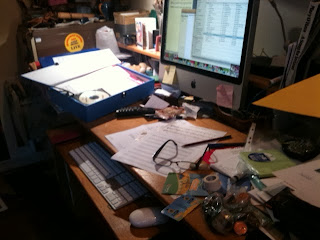 I spent most of the day preparing songs for my singing group which starts tomorrow and started looking for a song with October in the title.   Look at the state of my desk!!!!  (Just to prove I was working !!)

Anyway, as I was getting a bit distracted with harmony songs I decided to let my distraction do something useful for an hour and prepare this blog for you all.


So here we go - October Songs - all a bit melancholic as you would expect - reflection must have been on the agenda for these October songwriters ... And there were a few lovely surprises ... a few not so well worth noticing as well , but a few gems.   For example, I only really knew Julie London singing "Cry Me A River" which I adore, but never imagined her singing fun songs ... So "This October" from her album "Calendar Girl" is a treat - great backing vocals too.

In Irish folk music The Castle of Dromore starts off with the line "October winds lament around the castle of Dromore" and I love singing it ... click here to hear my version of it - and that's Finbar Furey playing pipes on it.

But back to songs with October in the title, here's a list of the best that I could find.

U2 - October - a very freshfaced Bono and Co ... what a wonderful piano track.   They probably don't remember, but I gave them their first Belfast gig - back in 1979 - at the Queens University Fringe Festival - and they supported Squeeze and Dr Feelgood I think!! Ah those were the days :)


Dave Cousins (Strawbs) - October to May