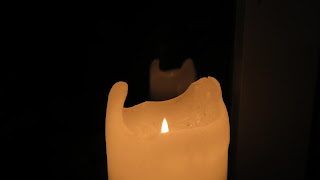 I want to start by saying how my heart breaks for the people in France today - where is all this terrible hatred coming from!  From Dallas to Baghdad and now Nice ... not to mention those poor souls in Syria.  After all the years of bombings and shootings that we endured in our little corner of the world I know that there is only fear in people's hearts at the moment.  All I can hope for is that we who are far enough away from danger, for the moment at least, can keep trying to spread joy and love and light into the world whenever we can or else the bad guys have won.

So on that note, I'm going to remember the good times this week and join with Amy at Love Made My Home for Five on Friday.  I'm keeping the bright side out. 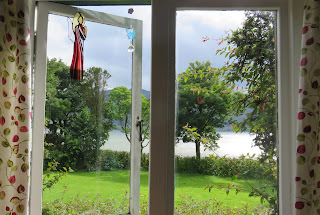 Today is St Swithin's Day - the story goes that if it rains today, we'll have rain for 40 days.   Old and not so old folks will be keeping fingers crossed here that we can get through another couple of hours dry - this must be the first day in nearly a month when it hasn't rained and I really don't have a lot of faith that we'll get to tonight without it.   What is it about July?  Nominally it's summer; everyone's ready for summer; the shops are selling shorts, sleeveless tops and things to barbecue .... and we have the fire lit!!
Ah well, nothing else for it - I went out and bought a jumper today. 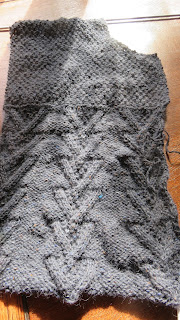 Reuniting a jumper that I thought was lovely when I started it and when I completed it first time around, is not such a pleasure anymore.   But I can't let myself away with not finishing it.   What happened was that I lost a lot of weight between starting and completing it and it never occurred to me to take a few measurements!!   That would have been too simple.   And I also never considered just giving as a present to someone.   so I have the back redone and this is the first of the fronts - the sleeves will also need to be shortened!  I have a feeling it won't be finished this winter.  Have you ever had ago totally restart a piece of crafting? 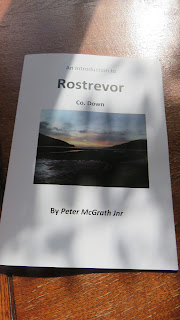 I told you last week about all the session here during the week.  It's building up to Festival time so visitors are starting to appear and it was the perfect time for a young historian here to launch his booklet Introducing people to Rostrevor.  It turned in to a fabulous night of songs and stories, tunes and yarns... Here's a few images from it...  I wish Peter every success with his first book - and if you're ever in the area he'll take you on a walking tour of the vicinity with lots of information.


After lots of soloists sang with great order in the room, the evening turned into a session with instruments appearing from nowhere. 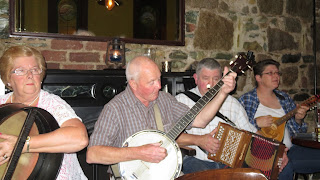 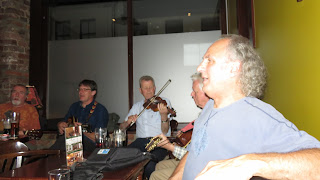 And ending up with the best rendition of that good old traditional song (not) of Paul Simon's - You Can Call Me Al - delivered by John and the entire pub doing the African Male Voice Choir backing up bits ....Very funny. 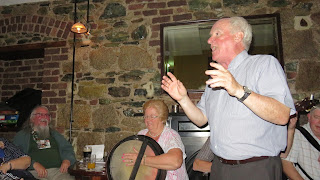 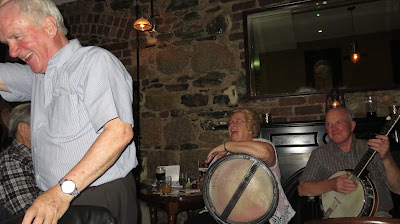 Tom and I headed down to Kerry for a couple of nights over the weekend - I've always wanted to visit Listowel, and to have a night in John B Keane's pub - probably the most famous pub in Ireland.
Listowel is famous for its writers' festival which takes place at the start of June each year and happens here mainly because of John B, who wrote The Field among other great stories of Irish life.   All his novels, plays, short stories and poems were written here behind the counter in his bar - watching the comings and goings and antics of the locals.

I love funny names for bands - I used to play keyboards once in a band called Dickie Ticker and the Palpitations!  Then there was the Ceilidh Band who once won the best band competition at some Scottish Festival in the 90s - they were called Ceilidh (pronounced Kayly) Minogue :)   Love it.

This one caught my eye in Listowel - pity the poster was curling up on itself ...


Thanks once again Amy for running this lovely blog hop and for giving me an excuse to find the things in life to be joyous about.

In an effort to get back into the swing of regular blogging, I thought I'd join in this week with Five on Friday which is run by Amy at Love Made My Home

This week we've had rain more or less every day so my baskets and window boxes are not thriving as well as I would have hoped ... yet ... and some of the debris from cutting out some of the shrubbery has still to be removed.   But the garden is looking great since we cut down the hedge and I can't get enough of looking out at the sea at different times of the day.


One - low tide last night and the sunset lighting up the trees.


Even after all the rain we've had, the world can suddenly turn on its axis when the sun shines and casts a brilliant light over everything. 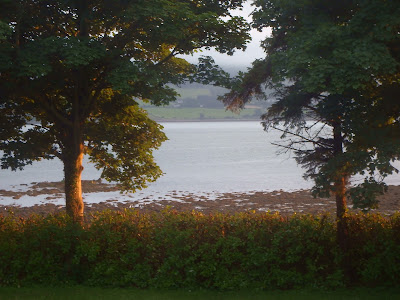 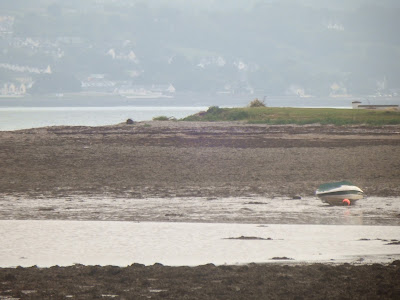 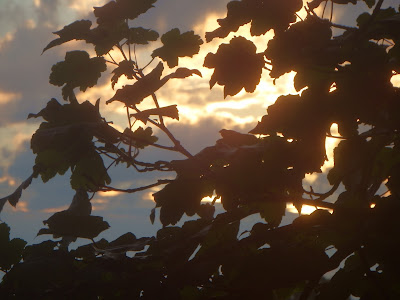 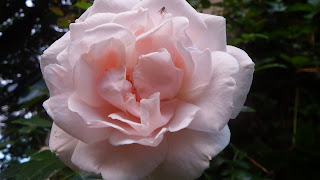 Three:   Ripe for the Picking 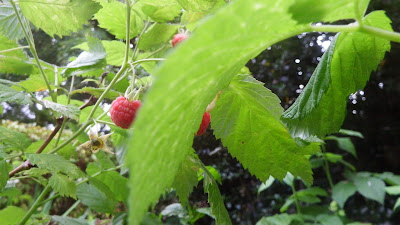 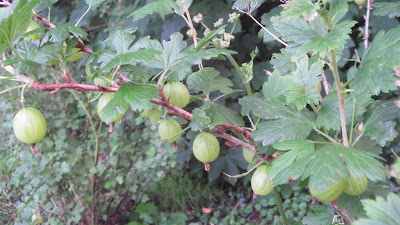 We're not great gardeners in this house ... I have an agreement with plants - there's the garden, now you do your thing!   If you want help from me you're probably not going to get it - so some of them, at least, appreciate being left alone.

I'm not really a doggy person, although most of my friends have dogs and we dog sit from time to time for them.    But we met a wee pug down in Australia earlier this year who was not taking no for an answer when it came looking for attention.   I wrote about him here.
Anyway, two things this week brought him back to mind - Firstly there was a festival for Pugs in England recently, called ... wait for it ... PugFest :)   Talk about cuteness.   Their website isn't great but you'll get the idea.
And then someone posted this photo on Facebook and I burst out laughing ... poor dog!   I didn't have my glasses on and at first I thought it was a sheep ... They look so worried ... But with so much bleakness in the world at the minute, they bring a much needed dose of joy and I love seeing them. 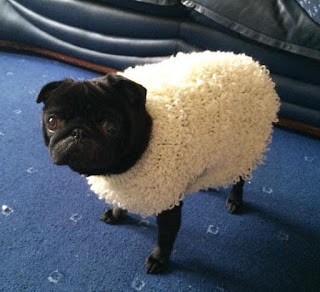 Five : Sessions
We now have sessions running 6 nights a week here in Rostrevor - not full-on traditional tunes sessions, but a mix of singing and tunes - mostly songs.   We are blessed with beautiful pubs in the village, and the place is coming down with songwriters and song interpreters.
Last night we went along to a new one which starts early for a change - everything was in full swing when we went in at 9 - normally they don't start until 10 or 10.30 by which stage I'm ready for bed, or at least I'm prostrate on the couch watching TV.  But it was superb - songs were sung from traditional to ballad to brand new to comedy to Bob Dylan and Leonard Cohen and there were two story tellers there as well.   There were visitors in from Australia, Germany and America as well as a bar full of locals as well.
Someone asked me recently about finding music in the pubs in the North of Ireland - that it's a bit more difficult than in the South.   Well it is and it isn't - most newspapers list where there are sessions taking place and usually in the smaller villages you'll find music going on somewhere where you are more than welcome to join in.
So if you ever make it to South Down, to Rostrevor, you can visit the Corner House on Tuesday night, the Rostevor Inn on Wednesday from 8.30, the Cloughmor on Thursday from 10, the Kilbroney on Friday, the Old Killowen on Saturday and the Kilbroney again on Sunday nights tfrom 7.30.   We are spoilt for choice.  Oh, and if you happen to be here on a Monday, then Gabriel leads the session in the First and Last in Warrenpoint, 2 miles away!  No excuses.

This is an old pic from the Tuesday night session in the Corner House over the Winter. 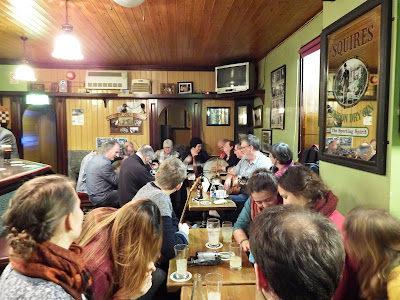 Email ThisBlogThis!Share to TwitterShare to FacebookShare to Pinterest
Labels: Five on Friday

Walking by the sea today

We're slowly getting in to the rhythm of summertime here - most of it spent indoors because of all the rain we've had, but there have been glimmers of wonderful evenings.
I went out with my camera on Sunday night and caught these images. 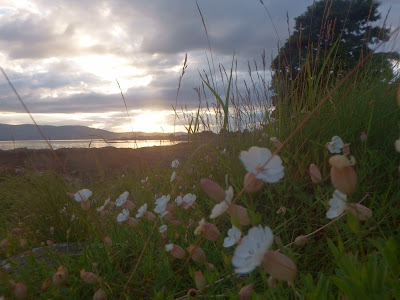 The sunset looked perfect through them.