A quick trip to West Cork and a great idea 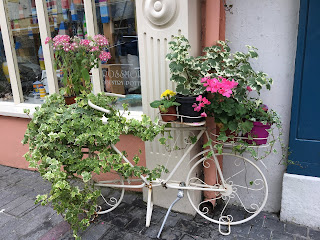 Gosh I'm so far behind with posting photos and coming by to say hello.   Every time I think I've something ready, something else needs doing .... aargh ... but I'll catch up.   I will, I will, I WILL :)
So to recover we ran away for a few days to West Cork.  And got a heatwave for our trouble.
PURE BLISS.

We did a couple of songs with the fabulous John Spillane (the essence of West Cork someone called him) in the wonderful de Barra's Folk Club which was our reason for being down that far south (it's about a 5 hour drive from here) - so to capitalise on it we decided to take our caravan (adding another couple of hours to the drive) and have a wee break which was worth it. 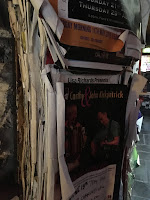 We've played in de Barra's several times, but maybe 25 years ago - we were wondering if one of our posters might be at the bottom of this pile we spotted on the wall!

As a bonus we hit upon the annual Old Time Fair and Brass Band Competition on Saturday  - a really joyful day of swing music, old trades, everyone in great form and the shops doing flying business.


Clonakilty is a beautiful town at the best of times, with loads of boutiques, great places to eat, excellent music and lovely pubs - it's about 40 minutes west of Cork city and well worth a visit if you're ever around those parts. 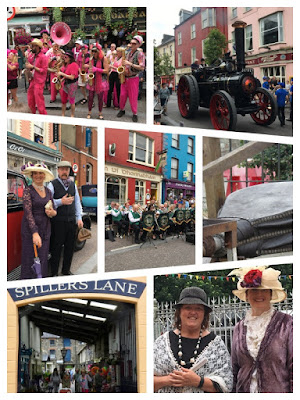 Here's a blast of the wonderfully fun (and pink) Ambling Band from Bristol who treated us to a splendid round of well known songs and got the whole crowd joining in the Can Can.   And they lead the final parade of vintage cars and steam engines in the evening.  If you're ever needing a band to add a bit of fun to your festival these guys are the business.

And the wonderful idea?
I spotted this sign in a cafe and I'm sure there are uses for it everywhere ...
The photo's a bit blurry but it says


We're getting ready for Fiddlers Green Festival now, coming up in under 2 weeks - a couple of gigs for us and for Singmarra and Tom's book launch - and also preparing for a tour of the Emigrant Woman's Tale over the Winter - so lots going on.