Happy Earth Week to you all - hasn't it been a beautiful week to celebrate.  And our scavenger photos all tie in with that with the prompt quite simply being

Where to start with this one ... when I was going through my photos I came up with a motley selection  looking around the wonderful place we call home and all the aspects of Earth I could find.

Anyway thank you Astrid for the Photo Hunt - you can check out what the others have been doing HERE.

And apart from the fact that it is the title of one of my all time favourite books, it is also one of my favourite colours.

Just popping in for a quick mid week hello.   Thank you so much for your lovely comments on last Friday's photo scavenger hunt pics.   It has been a great constant all winter when there wasn't so much to blog about.

We're working on new songs at the minute, getting ready to put a collection together , and we're spending a couple of hours every morning in the studio.   But once the heat gets into the day it has been brilliant to be outside.   It's good to have a few things to focus on (in between tv, knitting and books lol).   I've given myself permission to take a break from teaching and from running my choir for a few months - zoom was getting to me and I must confess my creativity has jumped in the past few weeks since stopping everything. 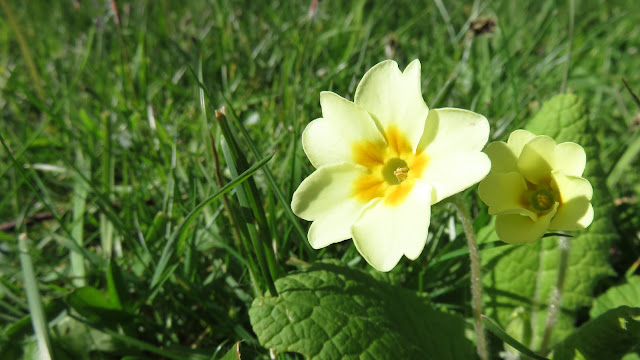 Spring is blooming everywhere and our lawn is full of old fashioned flowers - a great excuse not to mow:) 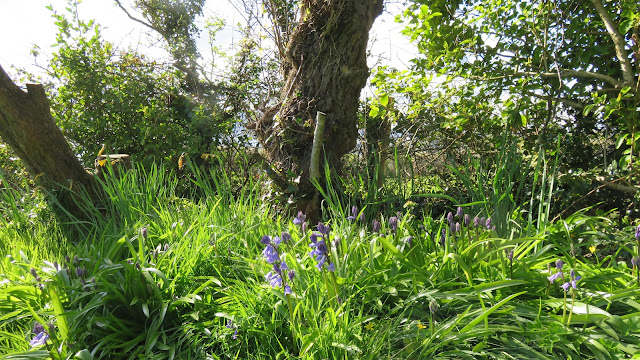 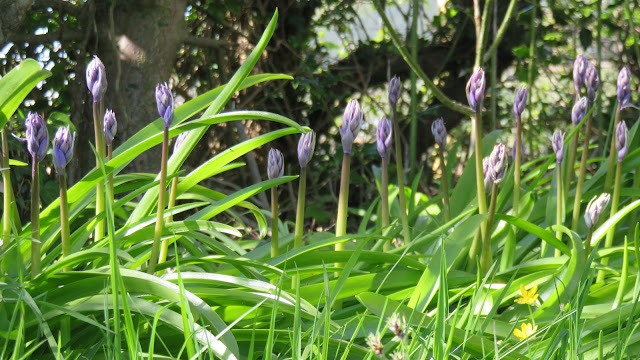 We've been cutting out dead branches and clearing an area for a small starter greenhouse at the back.   After being at home all spring last year for the first time ever at this house (in 18 years) we made a bit of a start at growing veg and more flowers and this year now we're getting more enthusiastic.  Our shops are still not open but the garden centres are and are mobbed of course - everybody is dying to get out and spend some money lol. But I have to wait for the greenhouse until the shops open.   Meanwhile it's more cutting, digging and preparing. 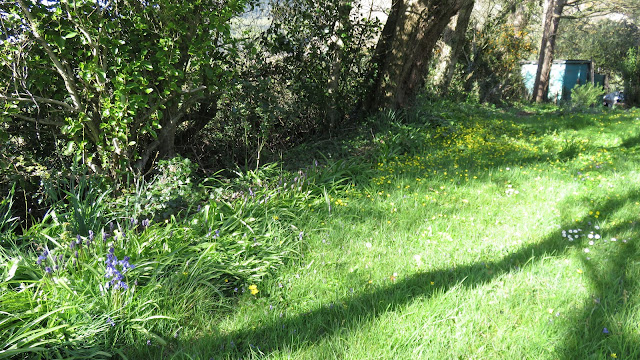 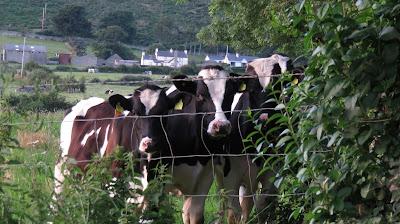 I'm sure I've shared this photo before with you but when I was looking around for Farm photos for Astrid's Photo Scavenger Hunt, it kept coming up and making me smile.   I'm sure that guy in front is called Joey - "What you looking at!?"
There are animals in the fields all around us here, but the big farms are further out the roads I've no big farm photos for you but my mum lives opposite a farm and as a child I grew up in a farming community.
We saved hay in the Summer and like every family near us we had a small piece of bog where we cut and saved turf each year - enough for the winter.   The turf was then transported up the back lane (the unapproved road crossing the border between Donegal and Fermanagh) on a donkey and cart and as children the greatest treat for us was to getting sitting on top of the turf for the whole journey up.  (Our bog was two fields behind our house, but in the South of Ireland in Co. Donegal and our hayfield was a few hundred yards up the road towards town in the North of Ireland in Co, Fermanagh - plenty of fodder for pirate and treasure hunt games when we were children lol)
I found this photograph taken of my Uncle Gerry in 1937 when he was still a young man, driving the cart in front of what is still our house.  It's a terrible photograph and was actually on a postcard but that cart was still at our house when we were growing up.   The lane was blown up during the Troubles so cars couldn't drive up and down it but the donkey could navigate the crater well.  Most of the houses along the road are still there and the one on the right is the home of a good friend who still checks in on my mum every day.   Gerry emigrated to America and shortly after arriving there was sent to Korea with the US Army - he survived and had a long life as part of the traditional Irish music scene in New York. 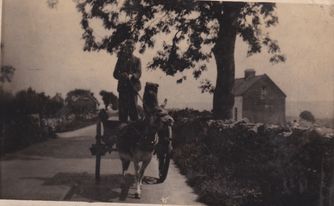 In the same batch of photos I found this lovely one of my brother up against a cock of hay - again as children we felt really grown up to be allowed to be on top of the haystack when the hay was being forked up - that usually ended in tears cos we didn't have the know-how to lay it properly so that it wouldn't topple over buy we kept trying. I wish I had more photos from those days - the sweetest tea was the tea taken from a can with freshly baked scones dripping in butter in the hay field.   My job was to bring the can of tea from the house only a couple of hundred yards away - on the handlebars of my bike - very carefully.
I'm not quite sure who the people in this photograph are - friends of Dad's I think, but you can see the field was well finished and the hay was fully stacked. 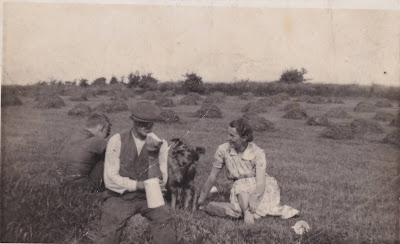 I wrote a song about these childhood days and just got it finished in time for the filming of The Emigrant Woman - it's called Stories from the Woods and it was such a pleasure to wander back and remember those times.     I'll be releasing these songs soon.
I'm joining in today with Astrid for the weekly Scavenger Photo Hunt.  You can go directly to the link to check out the other photos HERE.
I hope you're all keeping well - we've been enjoying a week's rest and taking advantage of the return to winter by doing very little :)   Next week it'll be time to get the head down again but for now I'm heading out to do my own small bit of farming and transplant some seedlings that are doing very nicely.
And as a postscript, my sincere condolences to all my friends in England in particular, on the death of Prince Philip earlier today.   I really feel for the Queen - such a long life together - it will be an incredibly sad time for her and the rest of her family as for any other family at such a time and even more so now during Covid.  We never got to do the Duke of Edinburgh Awards where we lived but he did so much for young people and his many charities.   An extraordinary man - I've often thought he had such a strange role in life, giving up all his own ambitions to walk behind and support his wife.  It has been very interesting this afternoon hearing about his life.  He will be sadly missed.  Rest in Peace Philip.
Posted by Fil at 17:11:00 15 comments:

The photo scavenger hunt has a new host this week - Astrid at Dragon Stitches and Stuff has taken over the reins from Kate who hosted it for the past 5 years.   Thank you Kate and hello Astrid :)
And the first prompt for April is

Now I have a problem with this one because I don't actually like chocolate.   I used to - in fact I lived on it in my younger days, but I became ill several years ago and it was chocolate and champagne on a birthday treat that made me really sick and I've associated the two with that since.  I persevered with it for several months - trust me, I wasn't about to let that one go, but nope ...  I never liked chocolate cake or brownies -  coffee cake was always my preference even as a child.   So why am I always struggling with my weight I ask myself.
Anyway, this lovely looking dessert was at a meal to wind down from Fiddlers Green Festival a few years back with some of our friends from abroad.   Sadly it looks like the festival won't happen again this year but things are definitely looking up and next year the celebrations will be fierce.
The sun is shining here, we've had a glorious couple of days and we've been back in the studio gently working on songs, in between doing some tidying jobs in the garden and trying to keep up with whatever Monty Don tells us needs doing lol.  Even managed a socially distanced barbecue for a friend's birthday and it was a treat - just 3 of us, but it was excellent.

Happy Easter to you all.   Take care of yourself and stay safe.
Check out the other Photo Hunt posts HERE