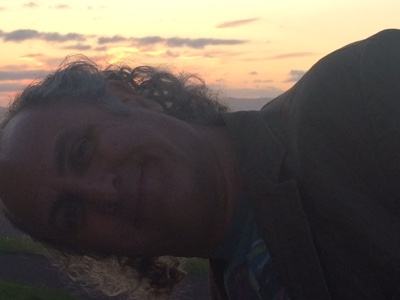 I made 3 attempts to capture the sunset tonight and my silly husband kept photo bombing me so I've left him in!!! 😀
It's been ages since I've been here to write a post - but thankfully all the busyness has calmed down for now and we're getting a chance to step back a bit.
We've been down at my homeplace for the weekend and the car broke down.  This, only two days after we decided to change it.  It must have heard us and taken offence.  Anyway we've had to stay another night to get it repaired, hopefully tomorrow, or else borrow my mum's car to get us back.  But it was a lovely gift of extra time - not having to do that 100 mile return journey.  So instead we went for a stroll around Bundoran, ate ice-cream and watched a couple strolling on the beach. 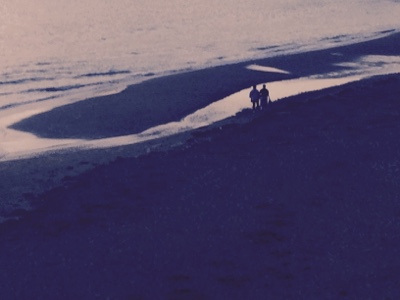 Bundoran used to be the height of holiday chic when I was young.  It was packed with amusement arcades, swing boats, dance halls, bars and chip shops. It is just across the border, in the very south of Co. Donegal, only a few miles from where I grew up, and traditionally this fortnight was its heyday.  People poured out of the North to get away from the 12th July mayhem.
Now, it's cheaper to go abroad if you want to get out and besides there's very little trouble around the 12th any more.  The Orangemen get to Parade, there's a Bank Holiday and places like Bundoran have to work very hard to attract visitors. Tonight the place was very quiet - a few people like ourselves wandering around.   Perhaps next weekend will be busier. 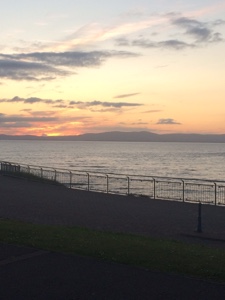 But all that aside it still has a magnificent beach and has lots of surfers around and in Winter the wild Atlantic can be seen in all its glory.
Did you have a favourite childhood spot? Has it changed much?
Posted by Fil at 23:56:00

Email ThisBlogThis!Share to TwitterShare to FacebookShare to Pinterest
Labels: Bundoran