Five on Friday - Catching up on reading

I'm joining in today with Five on Friday run by Amy at Love Made My Home.

I haven't been out taking many photos over the past while, so I thought I'd focus on some recent reads - here are 5 I've really enjoyed.

The winter months are great for catching up on reading and I have been bingeing - both on my Kindle and in the lovely big juicy properly printed versions.  So here's a few  to mention in case you're looking for some reading ideas...

I have taken the synopsis on each book from Goodreads.

All the Light We Cannot See by Anthony Doerr
Winner of the Pulitzer Prize
From the highly acclaimed, multiple award-winning Anthony Doerr, the beautiful, stunningly ambitious instant New York Times bestseller about a blind French girl and a German boy whose paths collide in occupied France as both try to survive the devastation of World War II.

I thought this was a superb book and I really enjoyed it.  A very detailed account of  some parts of World War II told from the point of view of two young characters both of whom were very well rounded and very human.  5/5

The Light Between Oceans by M.L. Stedman
Tom Sherbourne returns to Australia and takes a job as the lighthouse keeper on Janus Rock, nearly half a day’s journey from the coast. To this isolated island, where the supply boat comes once a season and shore leaves are granted every other year at best, Tom brings a young, bold, and loving wife, Isabel. Years later, after two miscarriages and one stillbirth, the grieving Isabel hears a baby’s cries on the wind. A boat has washed up onshore carrying a dead man and a living baby.

This book was so moving ... and gripping..   I couldn't put it down.  A story about consequences - can't recommend it highly enough.  5/5

Peaches for Monsieur le Curé by Joanne Harris
When Vianne Rocher receives a letter from beyond the grave, she allows the wind to blow her back to the village in south-west France where, eight years ago, she opened up a chocolate shop. But Lansquenet is different now:

This follow up to Chocolat by Joanne Harris was a great read - a bit of a soap opera, not too taxing, and most enjoyable .... I wish now that I had read Chocolat rather than just watching the movie - Joanne has a great way of describing food - I've read several of her books over the years and they always make me hungry!!  This one is a very timely look at the divisions of immigrants and natives .... 4.5/5

The Reader on the 6.27 by Didier Laurent
An irresistible French sensation - Mr Penumbra's 24-hour Bookstore meets Amelie - The Reader on the 6.27 explores the power of books through the lives of the people they save. It is sure to capture the hearts of book lovers everywhere. Guylain Vignolles lives on the edge of existence. Working at a book pulping factory in a job he hates, he has but one pleasure in life ...Sitting on the 6.27 train each day, Guylain
recites aloud from pages he has saved from the jaws of his monstrous pulping machine.
A thoroughly enchanting read - I loved the characters and the snapshots of the stories he reads .... Lovely .. 4.5/5 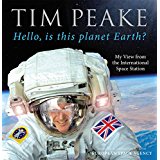 Hello Is This Planet Earth? by Tim Peake
This is a great coffee table book.  I bought it for Tom for Christmas although really I wanted to look at it myself.  It was so exciting to follow Major Tim's journey to the Space Station and back last year - he's such a likeable man and his enthusiasm for all he saw and did comes across in this collection of photos from the Space Station.   With the added bonus that all his proceeds from the sale of the book go to the Princes Trust to help young people get some of the opportunities he had in his early life.  And it was just announced that he's heading up into space again ... excellent.  5/5

Have a lovely week and if you have time, check out some of the other people participating in Five on Friday.  Thank you Amy for putting this together.

Love Made My Home