Every year Singmarra, the community choir that I direct, take part in the pageant to turn on the Christmas lights.
We lead  a group of children, who in turn are led by Mary on a donkey and Joseph guiding her,  up Bridge Street and onto the Square where Santa comes to turn on the lights and give them sweets and we sing carols at the tree.

Every year, someone complains that they can't see the children cos we're in the way - so this year, I finally persuaded one of the chaperones to delay the children by about 30 yards and then we'd step onto the pavement to allow them to be seen starting their procession before carrying on.

All went as planned for about 20 yards when the children pushed us out of the way and flew past us at a gallop up the hill - poor Mary would have had the baby half way up at the rate they were going.  Maybe the fact that the donkey had been replaced by a Shetland Pony this year explained it.

Whatever ...   We ended up racing after them, totally winded, singing Silent Night between gasps for breath and arrived puffing in 3 different lots to the tree, by which stage the children were all lined up in wait for Santa, and the pony and Mary and Joseph were nowhere to be seen.

So anyway we sang carols under a gazebo beside a newly planted tree and the kids even joined in with us on Away in a Manger and Silent Night.   About 200 of them waited patiently with their parents  for Santa and the Lord Mayor to turn on the lights and hand out sweets, we finished up, headed to the pub and all is well for another year.

The following afternoon we did our first concert in a lovely restaurant called The Church which is in a deconsecrated Methodist Church.   A mix of winter songs, a few carols and our trademark African and southern seas songs,  and diners had a treat and we had a blast. 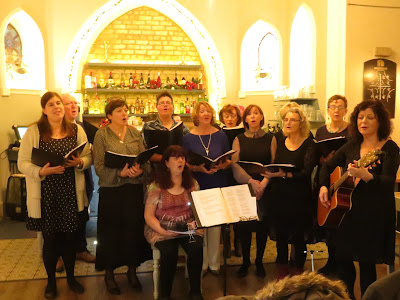 Apart from that December has been a social whirl so far - a couple of dinner parties and a Christmas night out for the choir, still teaching a few classes until tomorrow - then into the cycle of driving and visiting or collecting relatives up until Christmas Eve.

How's your December shaping up?