I've fulfilled a long held ambition this weekend past, to have a stay at the Tyrone Guthrie Centre in Co. Monaghan.

This is a residential retreat for artists of all disciplines to come and have a space away from home and be looked after, fed, watered and housed to facilitate the creative process.

And it is magnificent.

" The opening of the Tyrone Guthrie Centre at Annaghmakerrig, County Monaghan is today seen as a turning point in the cultural life of Ireland. At his death in 1971 Tyrone Guthrie, with the encouragement of his family, left the house in his will to the Irish State for use as a residential workplace for artists.

Guthrie’s dream was pursued by visionary and dedicated people through the two arts councils in Ireland at a time of deep political division. The old house was skilfully converted and Annaghmakerrig opened its doors to its first residents on 10 October 1981."

Anyone from any art form (and you don't have to be Irish) can come here for some seclusion - and the only rule is that everyone comes together for dinner which is home cooked and 5*.   There's a dance studio, library, art and sculpture studios .....
... we were in the music room which houses two grand pianos - luxury.  Plus there's another grand piano in Lady Guthrie's drawing room.
I found that this piano on the right in the big room brought a new tune from me every time I sat down ... the one at the window in the photo above that was perfect for working over ideas and transposing chords and the one downstairs only wanted folk music played on it!!! 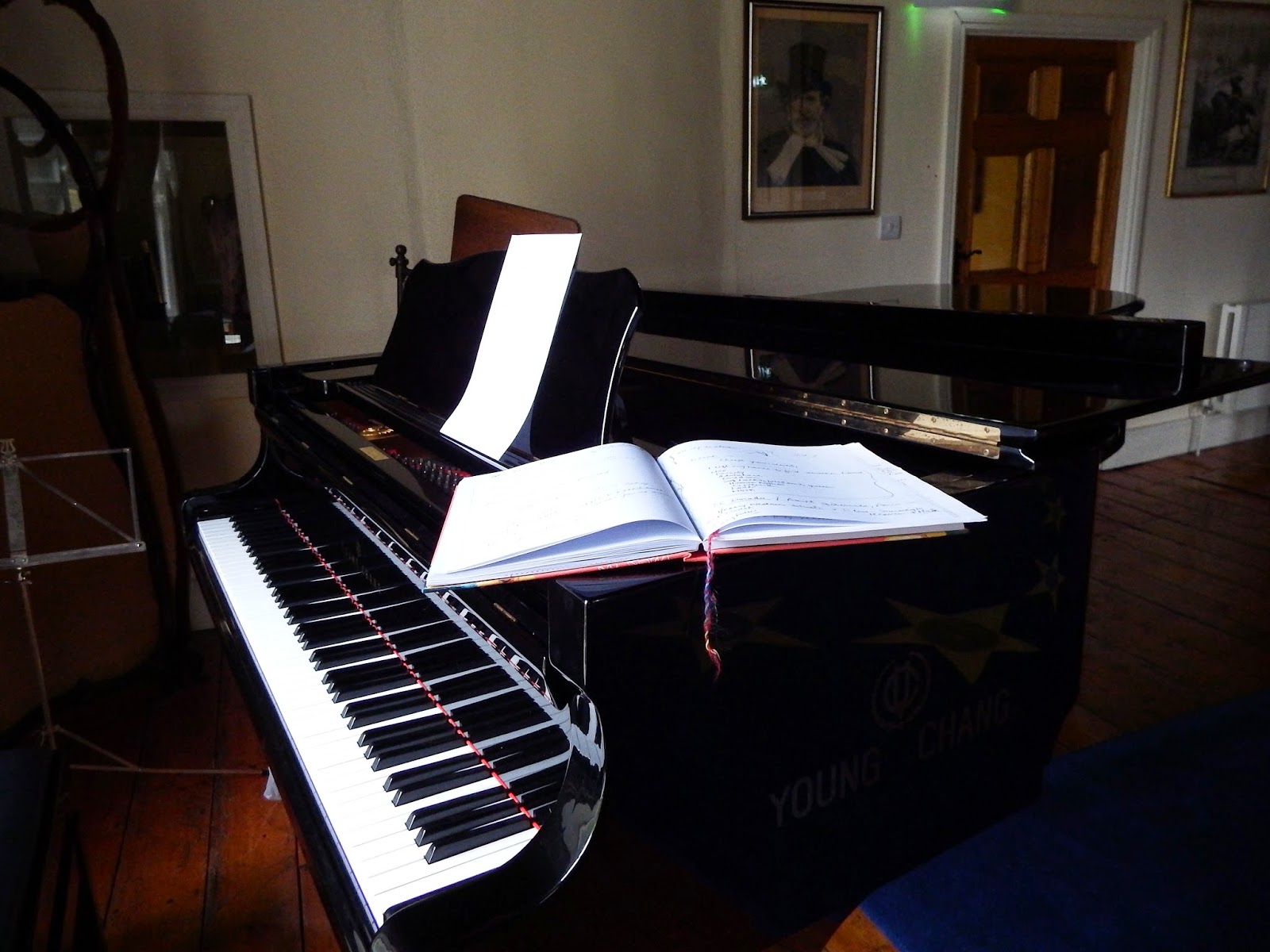 What a luxury to be the only player and be allowed free access to all these instruments - my piano at home does not compare and might have to give up its place for a newer model.  Although it breaks my heart to part with instruments that are still intact, still it would be wonderful have one that feels good under your fingers.


I was fortunate to be here with a poet, Csilla Toldy, who secured a bursary for the two of us to work on a project for 4 days.   Very lucky for us.

Csilla (pronounced tShiela) is from Hungary.  I have been setting some of her poems to music and we are co-producing a piece about emigration which we hope to have ready for International Women's Day in March next year.

As our stay went on the creative energy just grew and grew to the point where I found it very hard to switch off and get some sleep - I wanted to write, paint, play, create - anything to get the adrenaline, ideas and energy out of me and onto paper or into the voice recorder on my phone.


Each night all the artists come together for dinner.  One night we had a singing and storytelling session afterwards and on another night a tour of the art workshops.   There were 4 painters, 2 other poets, a playwright, a storyteller, a journalist, someone developing a script for an animated film, another working on a poetry Ph.D, an essayist (who knew such a thing existed) and at least two novelists.  We come from Holland, Germany, Australia and America as well as Csilla from Hungary and a few of us from Ireland.

Over the years, many world famous artists have stayed here - and most leave some of their work behind to dress the walls, fill the library and add to the already huge collection.


We've made very good progress over the weekend, had many long conversations and pushed ourselves hard to produce work that would not so easily happen at home.   I've written two piano pieces and one song and Csilla has written several new poems.

I will definitely try to go back here for some time on my own in the future.   It's a working holiday and everyone leaves utterly exhausted ....  but oh what a wonderful exhausted.