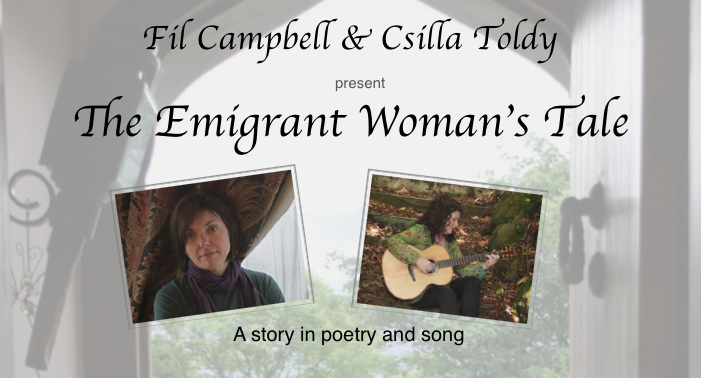 Csilla Toldy comes from Hungary and now lives in Rostrevor.   She is a poet and a film maker.

She escaped, or rather left Hungary illegally, when she was just 18 years old.    She and her boyfriend at the time travelled to Yugoslavia by train and then took a bus to the border with Italy (the green borders) and from there spent a day and a night on foot crossing the mountains into Trieste in Italy,   A few more train journeys, afraid to sleep in case they were caught, and finally getting to the border with France to discover that she only had a passport for the Eastern bloc countries, not for the West.   So this time they crossed the Alps on foot to eventually get into France and to Paris a week after leaving home supposedly to go on a holiday.

The Emigrant Woman's Tale is her story told in poetry and song, some of my music to her words and some of my own songs that illustrate what was going on here in my life at the same time.

We will be presenting it in the Book Club in Rostrevor on Saturday 14th March and again in No Alibis bookshop in Belfast on Tuesday 14th April.  Entrance is free.
We've also published a short book to go with it - Csilla's poems, my song lyrics, and memoirs from both of us, plus a CD of her reading some her poems and my songs from the show.  It's all very exciting now that it's coming together.

We don't treat our immigrants well - anywhere in the world I suppose.  And yet we were very badly treated when we were emigrants.

This is the final song of the piece

This Is Home (An Immigrant's Tale)

But the people who live in this place
Are not happy seeing my face
They don’t like my accent
My culture, or name
I’m not welcomed, I’m told to go home

What of the times in the past
Their ancestors just like me now
People say “You’re not wanted here”
We are just to be feared
Can’t they remember the hurt?

Email ThisBlogThis!Share to TwitterShare to FacebookShare to Pinterest
Labels: The Emigrant woman's tale