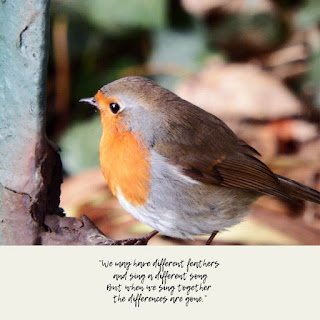 It seems like a long time since the end of July when we launched Tom's children's book at Fiddlers Green Festival back at the end of July.  Since then we've waited to promote it until we decided how to proceed.  It has been taken back to primary schools in England, Germany, Denmark, Australia and Canada and there's already a German translation of it, so there are possiblities if we can follow them.  It has even ended up on the desk of the President of Ireland!

The Birds' Song is a fun song about the problems of immigration ... and when we first started to sing it in folk clubs, several people asked for it to be put into a book for children as it relates to the themes of diversity and culture that they focus on for 6 and 7 year olds.

So now we're onto its second print (and we're delighted to be able to take the price down a wee bit) and we're just starting to get it out beyond friends and family and the local area, so fingers and toes crossed that we can get it to those who like to read to children and teach them songs.  One teacher in Liverpool has promised to teach it to her children for christmas assembly and video it for us - that would be so exciting and another friend in Germany who did the translation of it is also teaching it to  her 6 and 7 year olds.


Robin and his friends Blackbird and Thrush are wondering why the foreign birds are not visiting and think that something is afoot.  Are other birds stopping them at the borders?


The Birds' Song is a gentle parody song about immigration, in a language that children can understand.  It is told from the perspective of the home birds versus the migrating birds. It was Tom's idea and he wrote the text.   It has been illustrated beautifully by Colum McEvoy and I wrote the music.


“We may have different feathers and sing a different song
But when we sing together the differences are gone.”

Aimed at children aged 5-7 years old and covering themes of diversity and culture, the Birds’ Song book is 16 pages, A4, has the sheet music included and is priced at £6.

Listen to The Birds Song here
Purchase here
Posted by Fil at 10:50:00

Email ThisBlogThis!Share to TwitterShare to FacebookShare to Pinterest
Labels: Fil and Tom, The Birds' Song, Tom and Fil Together, Tom McFarland