I have no idea why why this post is in my draft folder - I distinctly remember posting it and noticed the other day that it has comments on it - so if you think you're experiencing deja vu, rest assured you're not. 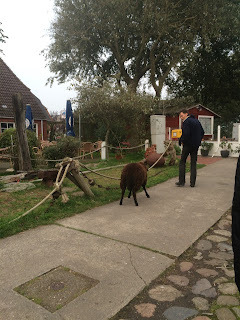 We were having a wander around Hanswarft on Hallig Hooge before our gig in the Cafe zum Seehund when we spotted this man walking in front of us.   Is that sheep following him? we asked each other!!!!  And sure enough he was. That's a chain around the garden, not a lead on him... 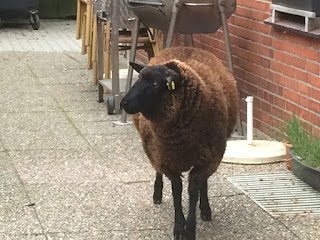 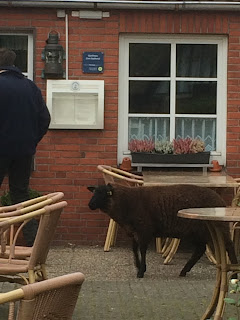 Man and sheep made their way to the front door of our abode for the night and Jörg, our host, came out to see what was going on.
The guy told the sheep to wait and it obediently did and then told it to go the other direction and off it went!!! 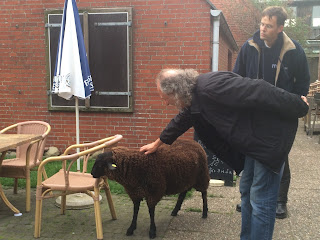 Roars of laughter and oohs and ahs followed.
What's he called Tom asked.   Well, I don't want to give him a name cos he's going to be a sausage some day - OH NO!!!!!  You can't do that! 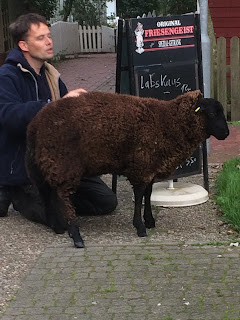 So Jörg very helpfully named him Lecker.  Do you know any German?   Lecker is the German equivalent of Yummy!!!!  Oh dear....  The poor wee sheep.

The previous night we walked to a session on Lorenzwarft and some more of Lecker's pals decided to follow us too - they must have been into the music. 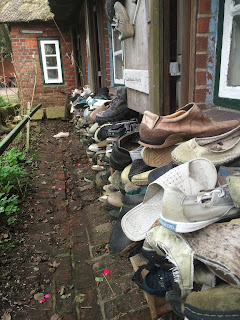 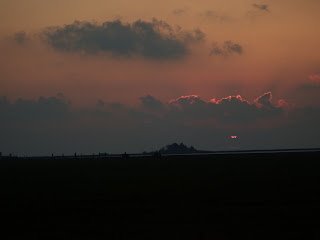 The Hallig is a very unusual place  - not quite an island, more like a silt deposit in the ocean without protection.  It's a nature reserve and the Canada Geese land here both in May and October.  The houses are all built on little hillocks, and the whole island is surrounded by a dkye.  Still, there are occasions when a storm hits and the place floods - then the houses look like they're sitting on the water.  There are other halligen - including Sylt, Langanesse and Amrun ... excuse the spellings if I've got them wrong.   In total 10 off the North West Coast of Germany.
If you're interested in reading more you can check out www.hallig.de   Hooge now has 85 inhabitants.