I love this Scavenger Hunt challenge - thank you to Jill (Greenthumb) at Made with Love for setting it up.   It's a lovely way to reflect on a period of time just  past.

September is always a hectic month, and looking back through my photos here it's also been a long month for us.   All regular activities start up again with the start of the school term.   So my singing group began again, tour planning for later in the year kicked in full time and then we headed off on the road.   So we've been through France, starting the tour with a house concert just outside Paris, and then in to Germany where we're now into our second week and this month's photos are reflecting that.    We head up into Denmark for a day then back through Germany to finish the tour in Luxembourg before taking the ferry back from France to Ireland.

It's very hard on tour to get time to just play with journals and blogs and photos.  We've been staying with friends, old and new, and the constant being in company, although it's wonderful at the time, is exhausting when there's no time to be on your own.

So I'm grabbing a quick half hour here and there to get these photos lined up and linked up.  Right now I'm sitting in a cafe on Hallig Hooge - a little island off the coast of Germany.

So without further ado, here are my pics for the September prompts list.

Killing two captions in one here... We were at the OctoberFest in Munich for a quick visit on Monday 28th.  Once you get over the shock of seeing so many men's legs in various states of undress, you start to notice all the girls in costume.   And some of them go the whole way and have beautiful woven hairdos.  This was only one I managed to catch.  And her friend had the loveliest curly red hair - very Irish! 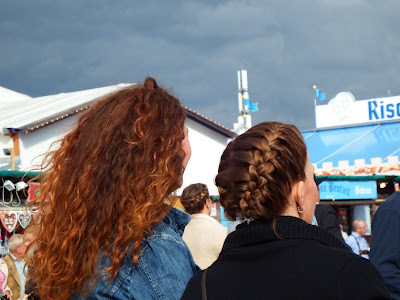 Repeating
Place des Vosges in Paris - 36 beautiful houses all the same surrounding a square in the middle. 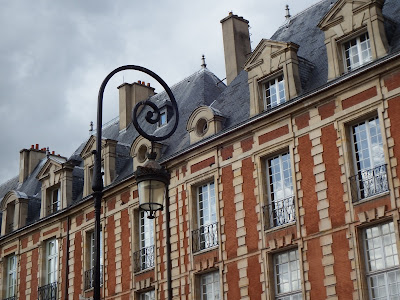 Outside Notre Dame in Paris, these pigeons were following everyone for food ... and obviously someone had copped on to the idea that they'd make a good photograph.   This young girl was posing for ages with pigeons landing on her head and arms. 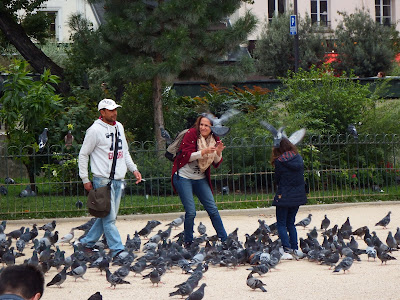 We passed through Le Marais area of Paris on the eve of a Jewish Festival.  There were stalls everywhere and a lot of people preparing for festivities.   But we passed this doorway with flowers strewn about.   What happened there?   Was it a wedding?  Or a party? 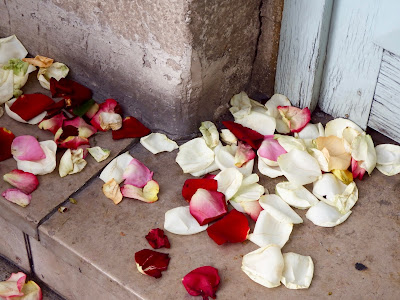 Crossing Borders and Driving on the wrong side of the road
This is a terrible photo, but it's the only evidence of crossing countries these days in Europe.   We spent my birthday on the 27th driving from Paris to Munich (11 hours in the car ... ouch) 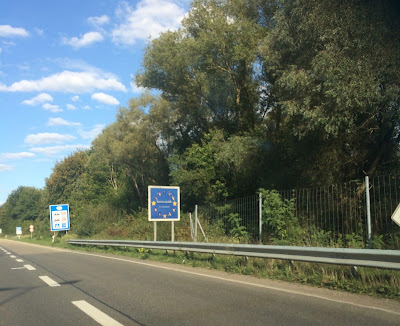 The queue, or line, waiting to get in to the Cathedral at Notre Dame in Paris ... We didn't have the patience to queue for so long, but it was interesting watching all the people milling around and standing carefully together. 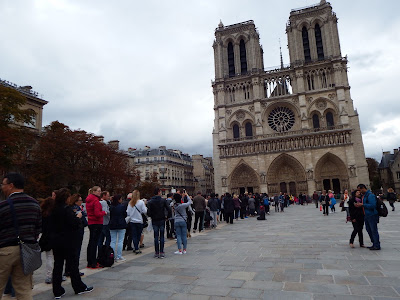 The sky at sea always looks bigger and the clouds are endlessly fascinating to me.  Here we were passing the Channel Island of Alderney 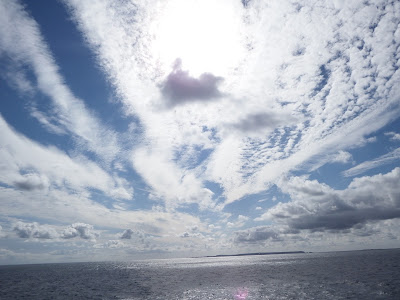 I loved this little courtyard in Paris, cloisters at a convent, and the triangular shapes on the roof. 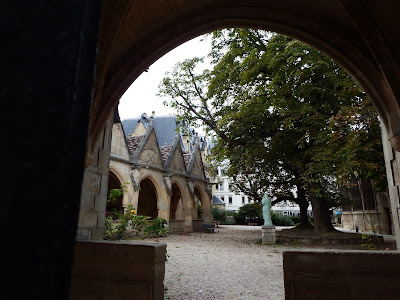 A wedding photoshoot outside Notre Dame
We kept seeing this couple - at first we thought it was a wedding where the groom was looking very bored, then we realised it was a photo shoot for a Japanese magazine. 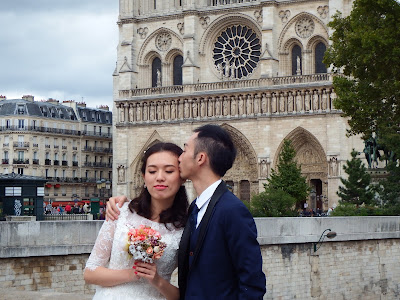 The other side of a day in Paris 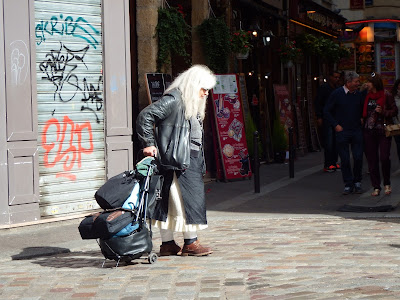 Have you ever ever ever in your long legged life .....
The man about town sporting the latest fashion at the Oktoberfest!   I couldn't get my head around the half socks, or calf socks as someone called them - some men even had wee ankle socks matching them as well, but I couldn't very well walk up to them and ask them to stand still for me to take a photo of them - it would have been embarrassing if I laughed! 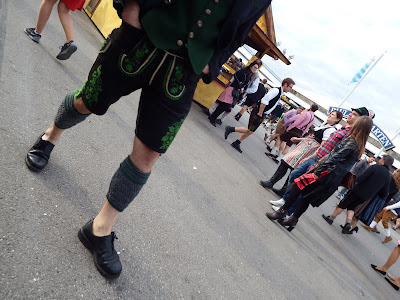 So that's a little snapshot of my month.   These prompts were very hard to get - a real challenge - I'm looking forward to seeing everyone else's interpretations and to seeing what the next list throws up.   Thanks again Jill