S is for Songbirds - the First Ladies of Irish Song 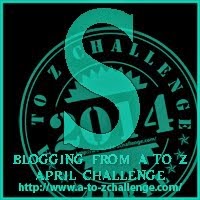 My S song is in Irish - listen here to Seoladh na nGamhna  (which means "herding the calves" and basically talks of a young one out bringing the calves home, meets a young man and the calves go home alone!!!)


Songbirds was a TV programme that I presented for Irish TV in 2006.
It profiled the lives of 5 influential women singers from the 30s, 40s and 50s who sang the common folk songs of the day -
Delia Murphy, Mary O'Hara, Margaret Barry, Bridie Gallagher and Ruby Murray.

Introduction to the series


The women profiled were Delia Murphy who was the first person recorded singing in Ireland in her own accent which makes her the mother of the Irish folk music industry.  Read my blog about Delia here


Mary O'Hara was a harpist who sang similar songs but in a very classical style.   She came from Sligo, was very beautiful and was featured in many TV shows in England in the early 50s.   Mary recorded many albums with the Clancy Brothers and had a fascinating life - started recording at the age of 18, married at 19, was widowed at 21 and entered a convent very shortly afterwards where she stayed for 14 years.   When she came out again she had another hugely successful career.


Margaret Barry was a wonderfully eccentric street singer, who came from a Spanish gypsy family, who was at the start of the folk revival in the British Isles, performed with Bob Dylan and Joan Baez to name but a few and is revered as a custodian of the traditional song catalogue.


Bridie Gallagher was the mother of modern Irish country and western music.   Again she sang much the same repertoire as the previous three ladies but added a country dance beat to most of the songs.  She came from the North of Donegal and became known as the girl from Donegal.   In the 1960s she did 19 tours to America for 9 weeks at a time and brought news from home to the legions of emigrants who had left Ireland for work.
And last but not least was Ruby Murray - a pop singer from Belfast who until very recently held the record for having the most songs in the British charts at the same time - in 1955 she had 5 songs in the Top 20 - and not even the Beatles did that.   Her crown was only lost when Michael Jackson died and all his albums went back into the charts.  Ruby was gorgeous and I had the pleasure of working with her back in the 1980s when I was stage manager in one of the local theatres.  Her biggest hit was Softly Softly - Frank Sinatra asked to work with her, but sadly after 10 months at the top she spent the rest of her life working clubs and small theatres.   She died in the early 90s.

You can read more in depth information about all these women here.
Posted by Fil at 10:00:00