It's a gorgeous day here today but I'm sitting in a long queue on the phone waiting to get through to national insurance people so I'm putting the time to good use.

For a myriad of reasons we had to cancel our planned holiday in France this year so we decided on a few day trips to make up for it.  Firstly to Dublin 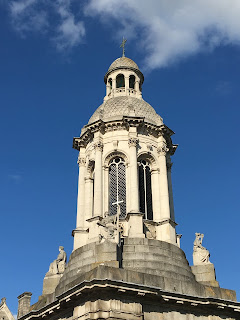 And we had blue skies and warm sunshine for it on Friday.  My friend, Hungarian poet  Csilla Toldy, with whom I collaborated on a two handed theatre piece called The Emigrant Woman's Tale, had a video poem in an exhibition of New Voices of Ireland (I'll give this a separate post) so we decided to make a day of it.   The train to Dublin always feels like a treat to me (trains were already gone when I was growing up in rural Fermanagh) and after lunch in my favourite Lebanese restaurant and a wander around Grafton Street we headed in to Trinity College to see the Book of Kells.


Photography was not allowed in the main room where the actual book is on display so I've borrowed these couple of images from the Internet.
Now, I'm sure all you learned folks reading this know about or at least have heard of The Book of Kells.   It's a 9th century illuminated manuscript of the Four Gospels plus some introductory texts which was written by 4 scribes and 3 artists as far as scholars can tell.
It really is a beautiful thing and is considered the oldest example of its kind in Europe and is Ireland's greatest treasure.
As well as the main manuscript, the University also holds 7 out of around 20 remaining small transcribed books that monks would have written themselves before setting out around the world to preach the gospel.

The exhibition From Darkness to Light describes the making of the book, plus The Book of Armagh which was written slightly earlier and the Book of Durrow, what inks were used and how they. were made and the fact that the exhibit book took somewhere around 189 calf skins to make.  Such laborious work.  And the scholarly research is impressive.

I've wanted to visit this for as long as I can remember, but I'm a terrible tourist and never got around o it and unfortunately when we went in the place was packed - apparently there was a cruise ship in for the day.   We got a glimpse of the book for a couple of minutes and the young people from the tours were so noisy we couldn't wait to get out again.   I will go back sometime though - perhaps in Winter.

The best part by far of the exhibition for me was walking through The Long Room which is the oldest library in the world and was built in the mid 1700s to house every book that was printed in the British Isles.  It's a beautiful space and houses over 200,000 ancient books and manuscripts including an original copy of the Irish Declaration of Independence - apparently only 2 of them exist.


The library also houses the Brian Boru harp which interestingly (for me anyway ) has nothing to do with the 11th century High King of Ireland Brian Boru, but was given to Trinity in the 18th century and dates back to the late 14th or early 15th century.   It is the symbol of Ireland and is one of only three instruments of its kind in existence.
Again there were so many people around it was hard to get a decent photo but I loved the detail on this - it's encrusted with tiny jewels and crystals which suggests that it was the instrument of a master musician or bard or someone from a very prominent family.

So all in all a very interesting browse and I'd highly recommend it, if you haven't already visited.   Trinity is right in the centre of Dublin so very easy to get to - but try to avoid the cruise ships unless you're actually on it yourself lol

So from there after a wee sojourn in Powerscourt Town House for tea and cakes, it was a long walk to the exhibition which was a delight.

As I said earlier I'll do a separate post for the exhibition .... stay tuned :)