You don't see many great songs about Tuesdays ... Ruby Tuesday is the first one I can think of .... but that's about a person .... Mondays inspire a lot of things - anger, excitement, anguish, doom and gloom, the start of a diet ... but Tuesdays are just in the middle.

So I went searching  ..... here's the songs I could find about Tuesday .... I started off having a real laugh .... the David Bowie one is ridiculous. (and this from a real Bowie fan!!!) ... but then I a few gems followed .... Cat Stevens, Stevie Wonder  and Counting Crows really stood out for me ... and of course Ruby Tuesday ... in fact I probably like Marianne Faithful's version of it better than the Stones, so I've added it in at the end .... 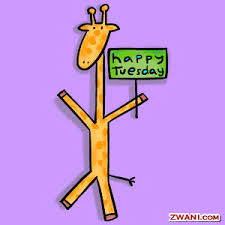 I hope you're having a great Tuesday :)