Five on Friday 5 goings on.

It's been a while since I last joined in on a Five on Friday, so long in fact that it has now moved house from Amy at Love Made My Home to it's new home with Tricky and Carly at FAST.

And as I thought I'd use the 5 as a bit of an update of what's going on around here. 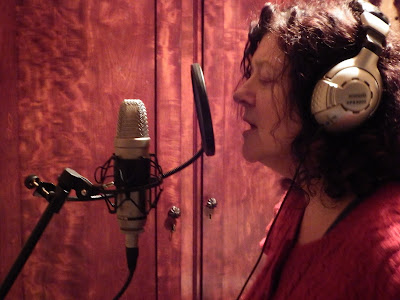 We've a good bit of the foundation work done for the new album now.  This weekend, now that the sun's gone away, we're finishing writing two more songs and that'll be the line up complete.  I am very excited about this project - it's been wonderful working with guitarist Steve Cooney who has embellished my own playing beautifully.  Although we've had to cancel another tour, this time to the Continent - neither of us are back to fit yet - but still we can be getting on with this sort of work.
In case you'e wondering, I'm not singing in a wardrobe, but close lol.   We live in a small cottage and when we need to separate the vocals and guitar, then Tom has mikes in practically every room of the house.   We once did an album in a friends' studio and the vocal booth actually was inside the wardrobe - that's where the best natural sound in the room was.   At that time I had illusions about going in to one of those big studios you see on TV, like Abbey Road - this is closer to reality for most musicians.   I'll try and get a pic some time with the house on cabled up. 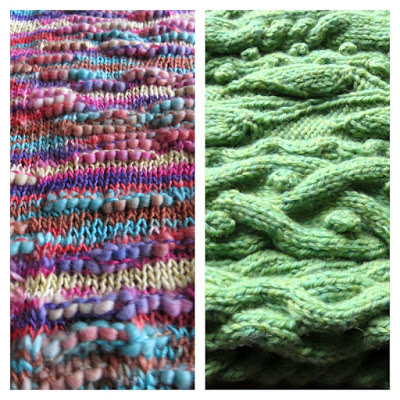 - on the needles at the minute I have two projects running as well as lots of small trial bits as well - my head's buzzing with ideas there as well as in my music.  But the main ones are a summer cardigan in a crazy multi coloured wool called Bamboozle from King Cole which I found at the Knit and Stitch show in Dublin last October ... It is such fun and really quick to knit up.   And a wonderful green wrap that I'm slowly trickling away at - in Cascade Heather - lovely wool. 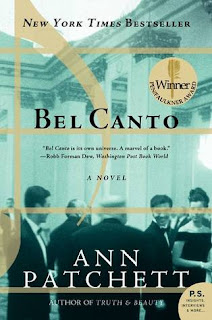 Bel Canto by Ann Patchett.
I've had this book on my shelf for years and for some reason didn't get around to it.      OMG - wonderful - suspense without violence and fabulously written.  In fact it won The Orange Prize for Fiction in 2002.   I loved, loved, loved this book - couldn't put it down.  It would make a marvellous film I thought and then when searching for a pic on line today I spotted that it was made into a film back then, starring Julianne Moore.   The book was inspired by the Chilean hostage crisis of the mid 90s.

From Goodreads - In an unnamed South American country, a world-renowned soprano sings at a birthday party in honor of a visiting Japanese industrial titan. His hosts hope that Mr. Hosokawa can be persuaded to build a factory in their Third World backwater. Alas, in the opening sequence, just as the accompanist kisses the soprano, a ragtag band of 18 terrorists enters the vice-presidential mansion through the air conditioning ducts. Their quarry is the president, who has unfortunately stayed home to watch a favorite soap opera. And thus, from the beginning, things go awry.  Read more 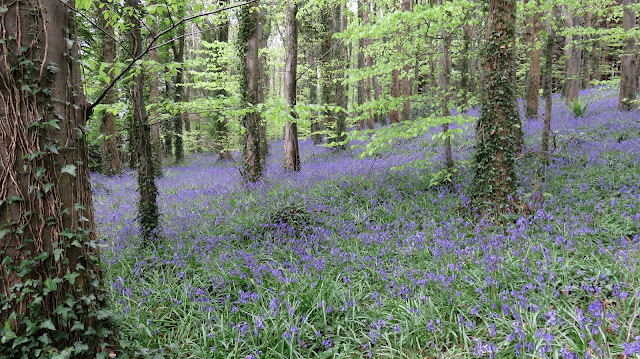 Nearly gone now .... But still worth a pic ... Bluebell time and the bluebell wood at Warrenpoint has been in full bloom for nearly 3 weeks - this woodland stretches for about half a mile alongside the motorway and is simply stunning.  I wrote a song called I Still Think of You for my father, passing this bluebell wood several years ago and this is the first time I've managed to actually get in and walk around it.
We have some wild bluebells at the bottom of the garden as well and between them and the birds pairing up and the rabbits bouncing around, there's been plenty to keep me amused without having to go very far from home.  Tom reckons that he needs another half dozen rabbits and then won't need to be mowing the lawn. 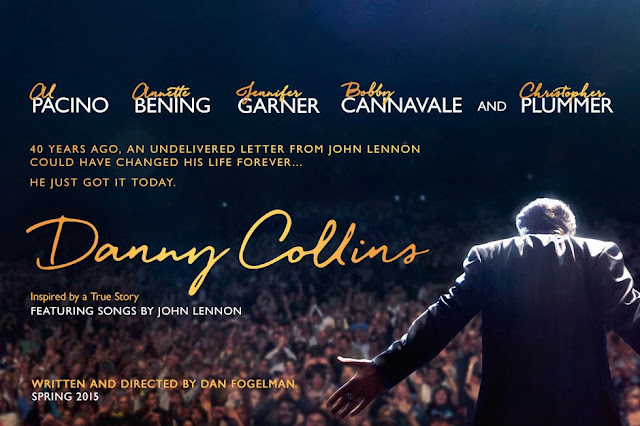 Danny Collins - I really enjoyed this feel good film starring Al Pacino based on a true incident that happened to a wonderful English folk singer whom I've known vaguely for years - Steve Tilston.   A letter was discovered written to him by John Lennon 40 something years after it had been written.   The letter had John and Oko's home phone number on it, along with an invite to call them and discuss the argument about whether or not being famous would change your creativity.

The film of course is a Holywoodised version and is not heavy watching by any means, but we thought it was great fun and it has a wonderful soundtrack of John Lennon music.   Well worth the watch.

And just as a bonus, here's a link to Steve Tilston himself, who is still one of the stars of the folk circuit. 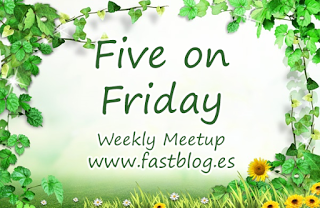 Email ThisBlogThis!Share to TwitterShare to FacebookShare to Pinterest
Labels: Five on Friday