Introducing: Pat Coldrick - never give up on your dream 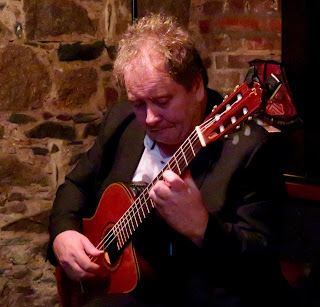 It's been a while since I introduced any new musicians here.

Pat is a self taught classical guitarist from near Dublin who played at our folk club a couple of weeks ago.  As well as playing flamenco and classical pieces he also writes his own music and does beautiful arrangements of Irish airs.

Above all else, Pat is a wonderful example that you should never give up on your dream.
He played guitar as a teenager and into his early 20s, then gave up as he couldn't make a living at it.  He turned to woodwork and for 25 years ran a successful business.   Until the crash came and many small businesses perished in the south of Ireland, including his.  He hadn't played guitar at all in that time, but picked it up one evening and decided to go out and busk.   People asked for more and the rest as they say is history.   Now he plays all over the world and his music and arrangements are sought after.

Our folk club venue is very small - Crawfords Bar - 45 people is the maximum we can put in.   On that night it wasn't full because many people hadn't heard of him, but for the 30 or so people who were there it was like a shared experience of being transported to another world.  His stories are charming and he fits as easily into playing in front of thousands of people in St Petersburg or New York as to playing in a tiny room.

This is a piece he wrote called Antartica ... it just blew us all away.  Enjoy.  And please support live music wherever you can.  30 people loving someone playing or singing can be much more of an experience than thousands worshipping at the altar of some rock god.

And something more traditional without the addition of effects - Sevilla by Albeniz ...